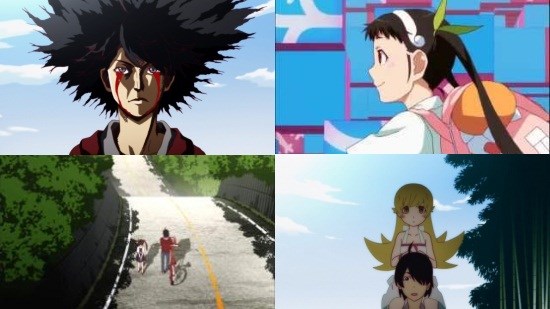 Well, now I know I must have been good this year (or at least not been caught) , having received two volumes of Monogatari goodness in as many months! After Nekomonogatari White raised the bar so high, it’s going to be a tough call to see if Kabukimonogatari can attain similar heights, so without further ado let’s jump right in!

We pick-up the story in the past – kind of. If you’ve seen the previous volume you’ll likely have picked up on the absence of Araragi and the hints that he was busy with other matters, and it’s in this story those matters are dealt with, although if you’re expecting any intricate plot weaving in and around the events of Nekomonogatari White you’ll be disappointed as we’re in full-on Back to the Future territory here. Having reached the end of the summer holidays Araragi is shocked to realise he’s failed to do any of his assigned homework. Fortunately Shinobu is on hand to lend some help with the startling revelation that one of her powers is the ability to time travel (provided there is a sufficient supply of energy handy). One time jump later and Araragi is handing in his homework and all is well. Wait, no that would be stupid and boring – of course things absolutely go utterly wrong as the pair end up ten years in the past and, whilst they’re there, Araragi decides he might as well try and prevent Mayoi’s untimely death which leads to some... unforeseen consequences.

On the front end, Kabukimonogatari doesn’t look all that promising as it’s really another two-hander between Araragi and Shinobu - the last time they tried something along these lines in the series it resulted in the drastically underwhelming Nekomonogatari Black. Fortunately Shinobu proves to be a much more effective foil for our perverted leading man, keeping the humour going and providing a more focused, albeit predictable, plot running at a pretty good pace through these four episodes. Oddly for this series though there doesn’t seem to have been quite enough time given over to the story though - the last two episodes in particular are home to several massive exposition scenes used to explain plot and back-story in a really ham-fisted way, and the final climactic confrontation ends up being a total anti-climax to the point where you wonder if you skipped a bit. Unlike several of the arcs in the franchise, this one could really have used some more time to make sure it could fit everything in.

Visually the series actually picks things up a bit from the last time out, with a heavier focus on character and locales we’ve seen before (including a welcome return to the glorious bamboo forest which still looks amazing) and less use of the CG sequences that the budget can’t quite keep up with. The opening credits are very cleverly put together as well here - part Escher painting and part block puzzle in a way that looks great, all of course featuring Mayoi (though like Karen in Nisemonogatari's Karen Bee arc she's actually more of a plot device that a character here).

Without going into spoiler territory I can’t really say too much more here, particularly as the plot is such a well-used one that the slightest hint from me will likely give the game away (a word of advice: don’t look at the front cover of the case too closely either as it’s a bit spoilery). Still, it is a nicely done plot and it provides generous helpings of Shinobu, who to a large extent becomes the lead character of the arc. Ultimately it hasn‘t dropped the series back down to Nekomonogatari Black levels but it doesn’t really do anything to make you sit up and take notice either.

Japanese audio with English subtitles. Extras consist of clean opening and closing, and a recap episode of the first three arcs from Bakemonogatari.

7
A good enough way to time travel an hour and a half into the future.