Kabaneri of the Iron Fortress - Eps. 1-5 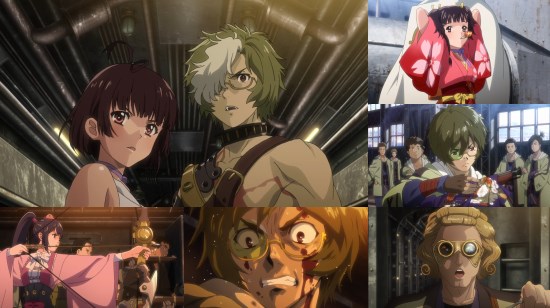 Kabaneri of the Iron Fortress - Eps. 1-5

From the moment Attack on Titan and its subsequent anime adaptation rose to become the biggest smash hit in some years, proving capable of tapping into the public consciousness both in Japan and abroad, the race was always going to be on try and replicate this success in the hope of feasting upon similar rewards. As a result, we've seen a shift back towards bloodier, edgier animated fare, with adaptations of manga series such as Tokyo Ghoul, Ajin and Knights of Sidonia looking to make name for themselves.

While these efforts have all enjoyed their own relative levels of success, they have all perhaps missed the most obvious trick of all - creating an all-new original property which carefully targets the themes and sensibilities that made Attack on Titan resonate so. Enter Kabaneri of the Iron Fortress, which reunites Attack on Titan's anime director Tetsuro Araki, composer Sawano Hiroyuki and Wit Studio, while adding the script writing wiles of Code Geass' Ichiro Okouchi into the mix to create an original series which has been rather harshly dubbed "Attack on Trains" by some.

The trains in question are a major component of Kabaneri of the Iron Fortress' heavily steampunk-infused world - a land enjoying its very own industrial revolution, but one where humanity is constantly under threat from a scourge known as "Kabane". To all intents and purposes, these creatures are zombies - mostly shambling, brain-dead creatures with a taste for human flesh and a virulent virus that will turn those bitten into Kabane themselves. Unlike zombies however, it isn't a blow to the head that will destroy these creatures, but rather the penetration of their glowing, pulsating "heart" which seems to be the home to the virus - cue those freshly bitten by a Kabane facing little choice other than a gruesome suicide thanks to a handy portable device that will literally break your heart.

While the populace and powers that be mostly live in fear of the Kabane, at best keeping them at arm's length with armoured trains, fortresses and largely ineffective weapons, one young man named Ikoma has applied all of his knowledge of both technology and the Kabane to create what he believes is the perfect weapon to combat them - a high pressure gun of sorts that can pierce the "hearts" of the Kabane with ease. It's a theory that Ikoma is required to put to the test sooner than he might have liked, as Kabane run riot and leave him with little choice but to risk his own life. The resulting events are life-changing for Ikoma in a quite literal sense, although he soon finds that he isn't the only one both blessed and cursed as he finds himself at the forefront of this fight for survival against the Kabane.

It has to be said that Kabaneri of the Iron Fortress doesn't have quite the level of immediacy that Attack on Titan does - while the latter series makes its world and politics clear almost instantly thanks to the sheer simplicity of its setup, the world depicted within this series is far less distinct in terms of its class system and how its society actually works. Thankfully, as the series progresses our picture of that society is being built up and gaps filled in, but in narrative terms it certainly doesn't have the same immediate impact of the series which influences it so.

Thankfully, that doesn't particularly matter, for Kabaneri of the Iron Fortress has plenty of tools of its own stored handily away within its arsenal. For starters, there's the broad aesthetic of the show - yes, some of its steampunk designs are outright ridiculous, but the overall effect of its world of metal and high pressure machinery is most pleasing and excellently depicted. This is a world that is both new and innovative yet lived in and suitably grimy, providing a dour yet detailed locations for the show's action to unfold within.

Oh boy, the action... in its pomp, Kabaneri of the Iron Fortress threatens to be unsurpassed when it comes to its big action set pieces. Whether it's a big and brash race against time involving trains, cranes and Kabane or one person's ridiculously proficient battle against a Kabane swarm, there's a vitality and energy that pervades every moment of these scenes. Whether it's generating dramatic tension or simply offering up combat skills that leave you stricken with awe, this series knows how to generate spectacle, and even five episodes in you could argue it's provided more than its fair share of memorable moments.

This is undoubtedly helped greatly by some superb animation - one of those aforementioned action scenes early in the series which sees the talented Mumei set about a mass of Kabaneri is possibly the most kinetic animated action set piece we've ever seen, and this sits at the forefront of a series that boasts excellent animation quality throughout. Of course, there are trade-offs - static panning shots when something with actual animation would be preferable - but the overall level of quality on show here is top-notch, and this element of the series is clearly a labour of love as it seeks to live up to its billing. All of this is helped by a raft of appealing character designs - Haruhiko Mikimoto of Gunbuster fame boasts this role, and there's a pleasingly old-school aesthetic to his characters that not only fit the show's environment but also feel fresh when compared to the norms for modern character designs. In short then, Kabaneri of the Iron Fortress is a phenomenal looking series.

As you might expect, this visual treat is overlaid by an insistent score from Sawano Hiroyuki - admittedly it hasn't reached the bombastic heights of his work on Attack on Titan or Kill la Kill, but perhaps that isn't such a bad thing here as the more restrained background music throughout most of the series allows for an even greater impact when it brings out the big guns in a musical sense. Certainly, when things get serious the soundtrack is always on hand to power events along in whatever manner is necessary.

Thus far, it feels like Kabaneri of the Iron Fortress has managed to succeed in every area that it's targeted - it's a visual tour de force, providing an action-packed narrative with points of high tension and no shortage of blood and guts, and it has a sufficiently strong world and characters to bring out the best in its premise. There's still much for the series to do to truly impress in its entirety mind you - the characters of its cast need to be fleshed out substantially in some cases, which we're finally seeing signs of five episodes in, and there's still no clear "end game" for that cast as we're currently simply following their desperate attempts to survive in this harsh world - but as we reach its halfway point we have a strong and entertaining foundation for this high profile series to build on, and we're certainly invested in seeing where it goes next.

You can currently watch Kabaneri of the Iron Fortress in streaming form with an Amazon Prime subscription.

8
It still has work to do to build its characters and story, but thus far Kabaneri of the Iron Fortress is an entertaining series with an excellent visual treatment.
LATEST REVIEWS