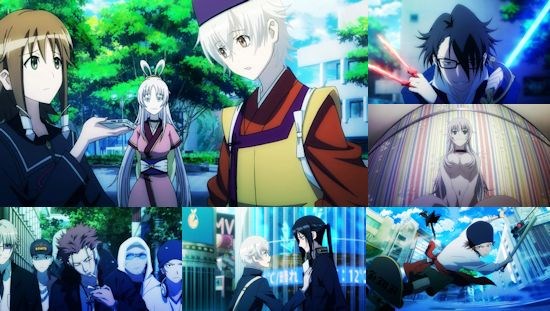 A raid on an apartment and office complex; a unit of sword-wielding, uniformed individuals; a near-future Japanese setting depicted against an eclectic and insistent soundtrack - if K's opening scenes are trying to do one thing, it's to scream "watch me" to the viewer.  Something that, given the involvement of Gohands on production duties and an aesthetic reminiscent of Mardock Scramble as a result, it succeeds in conveying without a doubt.

There needs to be more to an anime series than some cool characters and slick, music video style production values however, and perhaps surprisingly K seems to spend its first five episodes making a slow, steady and deliberate attempt to build its story.  There are virtually no fire hoses of exposition turned upon the series at this point, meaning that there's still a lot that we don't know about its world even at this juncture - what we do know however is that there are seven seemingly superpowered "clans" operating within Japan, each of which has a so-called king and a colour assigned to it.

All of this seems irrelevant to the life of Yashiro Isana ("Shiro" to his friends), a friendly free spirit of a high school student who seems to spend his days in a state of simple bliss more or less doing whatever tickles his fancy.  But is there a dark side to his cheerful exterior?  Video footage broadcast across the city seems to clearly implicate him as a brutal murder, while at least two of those aforementioned clans are taking a keen interest in the boy depicted in the video on account of both his actions and his words.

Away from this solid murder-mystery scenario in place and some other twists and turns inherent in that story during these early episodes, K as a whole proves to be a curious affair, whether it's the unexplained appearance of a naked heterochromatic cat girl or the behaviour of swordsman Kuroh Yatogami (Kuro and Shiro - do you see what they did there?) who turns from seeking vengeance against Isana to borderline best buddies.  With so many seemingly random elements thrown together, and more to the point supplemented by the show throwing out random elements of jargon which are ill-explained or not explained at all (what the Hell is a Weissman level?), this slapdash story-telling approach makes for a series that feels like its aiming to run for much longer than twelve episodes - or worse, a show that's trying too hard to tick boxes with anime fans rather than trying to build its narrative.

This line of thought also tends me towards worrying that K might turn out to be a case of style over substance - the series works really hard to be eye-catching from its character designs to its overall aesthetic and colour palette; sometimes too hard you could argue, with all of its fish-eye lens shots and filters that occasionally make it feel like someone has uploaded the video to Instagram and not Anime on Demand.  Overall though, I am a fan of the shows visuals and soundtrack, and it's certainly one of the most striking shows the autumn season has brought our way despite cutting corners when it comes to delivering action scenes.

I don't want to be too harsh on K - its built a world that evokes positive comparisons with everything from Durarara to Chaos;Head - but I do feel that it has done far too little with its five episodes to date in terms of significantly progressing its story or, more importantly, the viewer's understanding of what is going on.  No number of naked cat girls or cool special powers can make up for the fact that I have no connection or desire to care about the characters or events depicted, and that above all else leaves K feeling cold and lifeless where its scenario should be vibrant with human emotions.  Whether the second half of the series can rectify this remains to be seen, and it certainly has enough ideas to work with, but a speedier and more thorough initial piece of world-building would potentially have made K a far more engaging prospect than it has currently proved to be.

You can currently watch K in streaming form via Anime on Demand.

6
It isn't short of intriguing elements or stylish visuals, but K lacks coherence and heart to the point where it can be frustrating to watch.
LATEST REVIEWS