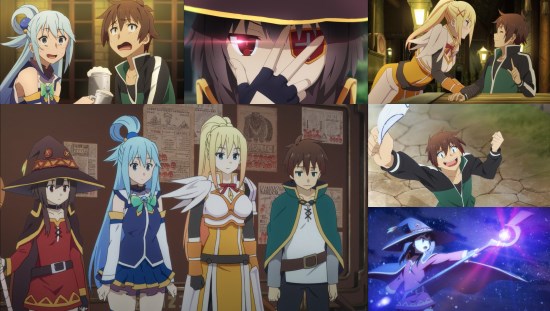 We've probably all seen or heard about enough "trapped in a fantasy world" stories to know how they typically go - a shut-in of some kind finds himself transported into a world approximating a video game RPG of some description, at which point he leverages all of his knowledge of said video games to defeat whoever needs defeating and immortalise himself as a legendary warrior. Given how dyed in the wool this setup is, it's surprising that we haven't seen more subversion of the concept up to this point, which brings us to KONOSUBA...

Kazuma Sato is, as protocol requires, a shut-in obsessed with playing RPGs, and it's a trip to buy a new game that leads to a series of life-changing events which begins when he jumps out into the street to save a girl from an onrushing juggernaut that's about to flatten here. Kazuma awakens to find that not only is he dead and currently in a kind of purgatory, but also that his death is an embarrassing mistake on his part that was all for naught.

Not helping our protagonist's mood is that this information is relayed to him by a rather smug goddess named Aqua who seems to be delighting in his misfortune. What's more, she seems hell-bent on steering him away from a place in heaven (which supposedly isn't all it's cracked up to be) and pointing him in the direction of the equivalent of hell - a world ruled over by a Demon King who has subjugated the people of an alternate world he rules over with an iron fist.

Naturally, the RPG-loving Kazuma is intrigued by the opportunity to become the hero who defeats the Demon King, especially given that the deal promises other sundry benefits and the perk that being sent there also allows him to choose one power or object to inherit and take with him. Thus, it's off to this alternate world we go, but not before Kazuma enacts his revenge upon Aqua by selecting *her* as the item he takes with him on his adventure.

If Kazuma expects an easy ride as an adventurer with his very own goddess in tow, he's about to be disappointed - life as a new adventurer is hard, with money and experience scarce and seemingly little opportunity to climb the adventuring career ladder. Even creating a party to throw some more talent at the problem backfires, as Kazuma finds himself lumbered with a girl who insists upon only using explosion magic which she can only summon once a day, and a valiant knight who is such a masochist that she's quite happy to be beaten silly rather than winning battles.

With no options other than to make do, Kazuma toils through numerous mostly disastrous scenarios while also concocting some unlikely victories along the way - no matter how you spin it, he couldn't be much further from the kind of hero he might have hoped to become in this brave new world.

If KONOSUBA's success can be attributed to any one thing, it's this series' ability to both have its cake and eat it without getting a stomach ache. The show both relies upon and subverts its "trapped in an RPG" tropes in equal measure, and the result is a heady mix - you get everything you might expect from an addition to this genre in terms of magic, mechanics and fan service, but all delivered with a cynical eye and a penchant for witty comebacks and one-liners that make the whole experience feel sufficiently fresh.

The show's entertainment value is also bolstered by its cast, whether it's the long-suffering Kazuma's exasperated one-liners or Megumin's excited attempts to use explosion magic to resolve any given scenario (which itself leads to one of the funniest encounters in the series when her magical training backfires on the group significantly). The party that we follow throughout the series slots together nicely to make a coherent hole, and it's hard not to be charmed or otherwise endeared by their efforts in the field.

Admittedly, not every episode of the show knocks it out of the park by any means - this is a show of clear, memorable highlights amidst lots of episodes that are merely "quite fun", and it doesn't do the series any harm at all that its tenth and final episode is the best of the bunch which leaves you feeling good as it confirms its forthcoming second season.

With strong voice performances across the board, the only area where KONOSUBA really comes up short is visually - yes, there are some nice CG effects on show, but the overall look of the show beyond its admittedly appealing character designs feels decidedly cheap and cheerful. Make no mistake it gets the job done (even if that job is too frequently gazing at Aqua's backside), but it's a long, long way from being a visual tour de force and comes up short compared to other similar series.

Make no mistake, KONOSUBA isn't a revolution within its genre by any means, but it is an entertaining twist on a concept that often takes itself entirely seriously. This more light-hearted and sideways look at the prospect of being trapped in an RPG-esque world is a breath of fresh air as a result, making good use of its cast and narrative to deliver a simply but amusing tale. Its entertainment value can be hit or miss when taken as a whole, but it has enough sufficiently strong moments to be a series worthy of your time, and when you look at those moments in particular it becomes easy to see the draw and popularity of the show. If it can keep its outlook and ideas flowing for a second series, one suspects that popularity will continue.

You can currently watch KONOSUBA - God's blessing on this wonderful world! in streaming form on Crunchyroll.

7
An entertaining little series that provides an amusing sideways look at its chosen genre.
LATEST REVIEWS