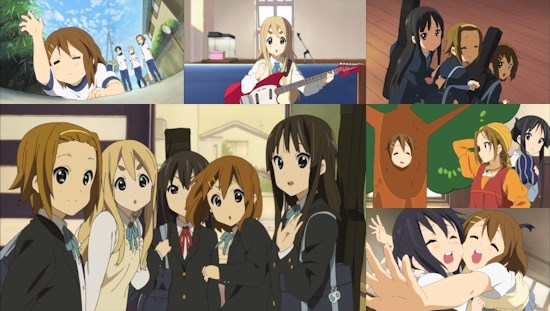 The end of an era beckons for the Light Music Club as we enter this second half of K-ON's second season on DVD, bringing with it the beginning of the end of high school life for four of its five members of the main cast.

Not that this fact hangs particularly heavy over the early episodes of this particular release, with Mugi exploring her masochistic side, a school marathon to contend with and the usual distractions to contend with, leaving Azusa more convinced than ever that her seniors are never going to find time for the band to practice.

The closer we move to the end of the series however, so the realisation that this idyllic high school life is coming to an end looms large, adding an urgency to the celebration of those final highlights of the school year, culminating in the traditional culture festival and the opportunity for one final live performance from After School Tea Time.

It's the episode which chronicles this final performance that marks K-ON out as something over and above the typical criticism levelled at it, that being that it's merely a show about "cute girls doing cute things" (as though there's somehow something inherently wrong with that). The entire instalment is directed and presented with a fantastically sharp eye for depicting the atmosphere, emotions and elation of the moment, but it's real denouement is in its closing scenes as both the club's members and the viewer are brought to the crashing reality that this is it - the end of an era. The presentation of this previously nebulous idea that "all good things must come to an end" as it becomes stark reality is perfectly delivered, and if you've followed the series through from start to finish to reach this point you'll be hard pressed to end this episode without a tear in your eye. Heck, if you've ever had to say a tearful goodbye when moving schools the recalled memories of such moments will probably be enough to impact you when repackaged for you vicariously like this.

In a way, it's a little unfortunate that the series decides to continue after this episode which would have made for a bittersweet finale, meaning that we return to light-hearted slice of life fare as the series tidies up graduation, selection exams and the future for the cast before returning to draw tears from the viewer one final time via Azusa's goodbye to the club's senior members.

I should probably hasten to point out that it isn't all tear-stained goodbyes from these episodes, and there's no shortage of light-hearted gags and merry-making to be found to keep the entertainment value of this second season high - it's just that the raw, emotional moments are so unexpected and cutting that, brief though they might be, they define this second season. These are the points that make you realise that you haven't just been laughing along at the antics of the cast as they sit eating cakes - you've been on the "journey" (as reality TV shows would have you call it) and you've learned to care about these characters.

Containing both the second half of the series and the OVA episode which serves as a lead-in to the movie, coming to the UK later this year, there's no shortage of content to be enjoyed here, and much as we'd still have loved a Blu-Ray release of the series to really showcase Kyoto Animation's craft this DVD release still looks the part. The English dub of the series remains an acquired taste (one which, like Marmite, I have still not acquired), but the show's subtitles are fully functional with only a few of those minor of grammatical errors or typos. Oh, and for some reason the DVD menus sport the opening theme from the first season of K-ON not the second, but does anyone really care about that?

If you're still unconvinced by the charms or merit of K-ON, then these episodes probably won't convince you - even its emotional crux is lost unless you've come to care about its characters - but assuming you are on-board with fun and hijinks of this group then there's no shortage of entertainment to be found here, coupled with some laser-precise stabs of considered and well-timed emotion. In other words, it's arguably a demonstration of everything the series can do best.

8
More fun and laughter is set against a surprisingly heartfelt and moving soft centre to the end of the light music club's high school days.
LATEST REVIEWS