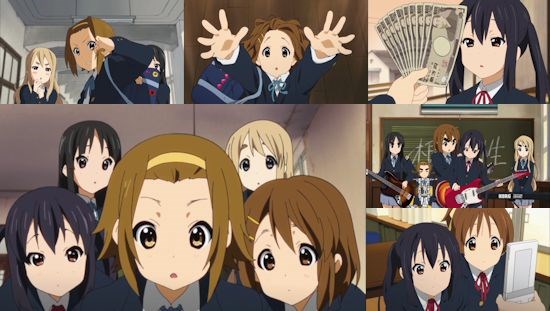 It's been around a year since we last checked in on the girls of the light music club, but now this high school quintet return to the UK as the second season of K-ON arrives on DVD. Can Houkago Tea Time navigate the pitfalls of this difficult second album?

As this series rolls around, little has changed for our cast of characters - in fact, although four of the five light music club members have now become seniors, it's very much a case of "as you were", with another round of recruitment drives to see in the new school year falling flat and leaving the group stuck with just five members. This actually leads in to a recurring theme throughout the first half of the series - yes, that's right, K-ON can do narrative themes too - that being Azusa's future when her club seniors and friends all depart for the next step in their lives, and the prospect of her being left alone as the sole remaining member of the light music club.

This offers some brief moments of contemplative melancholy that adds a little extra frisson to the light-hearted fun and frolics that make up the main body of the series as the light music club girls go on a class trip (to Kyoto, of course), deal with rainy days and the return of Mio's fan club, and have a minor crisis when Ritsu decides that she doesn't want to be the drummer any more. All of this is delivered in that typical K-ON style, with the personalities of the cast bouncing off one another pleasingly and offering up enough good humour to make the whole thing a fun viewing experience. Even where the series is re-treading old ground, it manages to mix things up sufficiently to be forgiven for doing so, and although this is by no means a laugh a minute comedy it exudes more than enough fun to avoid boredom setting in.

There really isn't too much more to say about the series at this juncture beyond that - if you enjoyed the first series of K-ON, you'll find a similar amount of pleasure from these episodes, but if you're new to the show then you'll probably want to pick up the first season to fully enjoy the second.

Looking more closely at this DVD release specifically, it can't be denied that the aesthetics of the show lose some of their vibrancy and detail without a High Definition release, but with the exception of some scenes here and there the overall image quality is pretty decent. The English dub for these episodes feels a little more restrained and practiced than that of the first season, which makes for an improved listening experience if that's you preferred flavour of language. This also brings us to our sole issue of note with these discs - if you're watching the series with Japanese audio, episode eleven has a notable several decibel increase in volume for some reason which distorts and muddies the audio as a result. It's a weird issue that thankfully doesn't occur in a music-heavy episode (as it doesn't impinge upon the audio quality of dialogue particularly), but it's another one to add to the list of "weird authoring errors that should have been caught in quality control".

While some may scoff at K-ON, and refer to it as "cute girls doing cute things" in a reductive fashion, this is perhaps to miss the point of the show's popularity - it's fun, and more importantly it's funny; just because it manages to roll these elements into a series that sets out not to be challenging or steeped in far-reaching story-telling doesn't somehow make it a trifle. Much like a trifle, it certainly isn't for everyone, but for anyone looking to sit down after a hard day of work, put their feet up and have a giggle without taxing their brain, this second season of K-ON is just as accomplished at the first.

7
More light-hearted fun and laughs are just what you'd expect from this series, and it certainly delivers exactly that.
LATEST REVIEWS