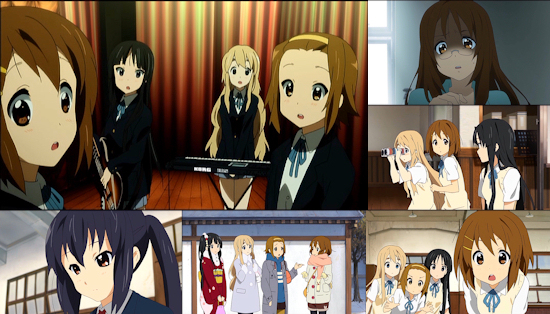 Having very much succeeded in delivering unto us a light and fluffy time with its first volume, K-ON returns for another four episodes of slice of life frolics to keep us entertaining courtesy of the members of its light music club as the nights draw in.

Then again, that's assuming that the light music club's existence will be officially recognised at all, as this second volume begins with a realisation that the club still isn't on the books thanks to someone failing to hand in the requisite paperwork (mentioning no names, Ritsu).  What's more, the club still doesn't even have the official advisor required of any after-school club, and with nobody available to take this role there's only one thing for it - resort to a touch of blackmail.

With these hurdles overcome, there's still plenty to capture the attentions of our quartet of cake-munching, tea-sipping wannabe musicians, with their first ever live performance taking place at the obligatory culture festival soon followed by the opportunity to unwind and have some fun as Christmas and the New Year fast approaches.  No sooner is this done with, we find ourselves back at school for the beginning of another year, and the chance to coax some new recruits to join the light music club.  Is anybody really going to want to join this band of larger than life friends?  Even Yui's sister doesn't seem convinced, but there might just be one potential application for a position within the group...

K-ON may not be the stuff of high drama or crazy abstract comedy, but it knows what it wants to do and sets out to carry out that remit with unerring accuracy.  Even when it isn't shooting for outright comedy there's a sense of simple fun which pervades every episode, and when it does come to getting a laugh there's plenty of sharp comic timing and snappy lines to help deliver those moments - abilities helped by a group of lovable characters that carry these episodes along admirably in their own right.

On top of it all, there's no denying the production values on show here - the Japanese voice cast fits their roles perfectly and the animation is occasionally breath-taking... well, at least as much as any slice of life anime can have breath-taking animation.  With its cute yet detailed character designs with plenty of focus on facial expressions and body language, this is another element which helps to define the show's comedy even before resorting to super-deformed character depictions and the like.

In terms of the UK release of this volume on DVD, picture quality is acceptable but not the sharpest - indeed, it seems to have taken a step down from volume one to my eyes.  Audio is perfectly acceptable however, and the English dub cast do a reasonable job here even if some of their voices threaten to grate on you occasionally.  Subtitles are solid, with the exception of one mistake where Mio and Mugi get mixed up, although luckily it doesn't have a catastrophic impact upon the scene in question.

We already know that K-ON won't be winning any awards for delivering hard-hitting plots or character development, so it goes without saying that if you're looking for any kind of depth in your anime then this series really isn't for you.  If you're quite happy to sit back, relax and enjoy something utterly innocent, frivolous and light-hearted however, few series can boast quite the wave of cheerfulness which this show succeeds in washing over you.  With its visual beauty and a decent vein of comedy, this second volume is the epitome of a Fuwa Fuwa Time.

English and Japanese 2.0 audio with English subtitles.  Extras consist of a Fuwa Fuwa Time music video (with English lyrics sung by the US voice cast) and an interview with the English voice actress for Mio, Cristina Vee.

8
A beautifully produced, light-hearted and fun handful of episodes that exhibit everything that makes the series so enjoyable to watch.
COMMENT AND DISCUSS
blog comments powered by Disqus