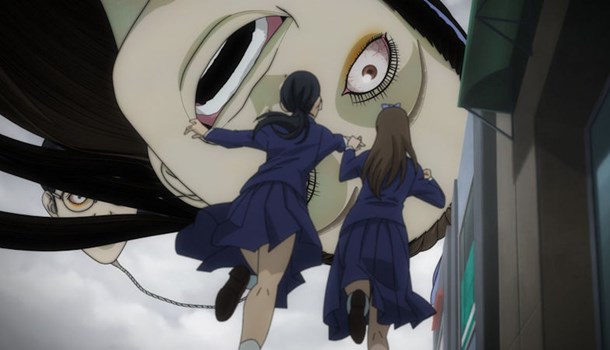 Episode one of Junji Ito Maniac, Netflix’s newest original anime series, in is the strange position of being a double edged sword. For the casual viewer it acts as an excellent taster to the weird world of the legendary horror writer. But for those who are well-versed in works like Uzumaki and Tomie, the first episode feels underwhelming.

Episode one of this 12 episode anthology interprets the story ‘The Bizarre Hikizuri Siblings’ and draws on elements from ‘The Second Daughter’s Lover’.

Following the Hikizuri family, a household of layabouts who live off their parents’ inheritance, this mildly unsettling tale kicks off when the eldest sibling, Kazuya, tries to impress a woman by throwing a séance. The siblings slowly spiral (see what I did there) into disorder when the spirit of their father ‘possesses’ Shigoro, the younger brother and family glutton. Through Shigoro, the spirit of their father berates Kazuya for pretending to go to work and not providing for his family, and names Shigoro the new head of the household.

While nothing about a Junji Ito story is meant to be enjoyable to experience, the coarse tonality of the voice acting ends up feeling more grating than unsettling. The youngest sister Misako truly makes this a challenging watch, not because of any perturbing behaviour, but because of her constant shrieking and crying, her screentime makes the episode feel like a chore to get through at times.

Much like Crunchyroll’s 2018 Junji Ito Collection, the animation and character design perfectly capture Ito’s signature art style. The soundtrack and added background noise also help to drive the tension and macabre aesthetic. Surprisingly, the opening track recorded by MADKID, does well to set up the psychological horror that ensues. The track features a blend of Denzel Curry style ‘hardcore, punk rap’ and heavily distorted synth and cuts to and from a more melodic pop song. By opening with these unconventional, off-tempo sounds (assisted by heavily distorted graphics), the audience is never given the chance to settle into the rhythm of the song, simultaneously making the viewer feel uncomfortable and preparing them to expect the unexpected.

The sparing moments of horror that show their face in this episode are mild on the Junji Ito scale. One scene features Misako slashing the face of her youngest brother Hitoshi with her fingernails. The way the camera holds on Misako as the gashes slowly appear across his face, each second feeling uncomfortably excruciating as the camera refuses to cut away. While this is an example of excellent filmmaking technique, compared to the levels of body horror often found in Ito’s work, it is underwhelming for hardcore readers.

Sadly, the level of dread and trepidation fans have come to expect from Junji Ito projects is yet to be found in the opening episode of the series. Instead, audiences have been given a rushed retelling of a story that had the potential to be so much more.

One thing to remember is that this is an anthology. While this first episode didn’t quite hit the psychologically tormenting mark a lot of fans were hoping for, each episode is a standalone story, so there is potential for greater frights to be found deeper in the series. Although, it appears that Netflix appear to targeting this show towards the casual viewer, potentially leaving admirers of Ito’s manga behind.

5
While it may be unsettling for the uninitiated, the horror elements are lacklustre for long-time fans.

Archie is a freelance writer from South London. He spends most of his free time (and his work hours) watching and writing about cowboys in space and hip-hop samurai. His parents are very proud of him. You can learn more at archiefenn.com