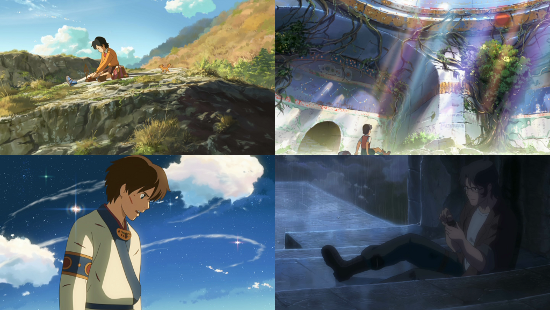 This review marks my fourth time watching Journey to Agartha and, truth be told, my thoughts on it are still much the same as when I saw it for the first time at Otakon 2011. (Go and read that review first if you have never heard of the film!)

To quickly catch you up (and paraphrase/self-plagarise my previous introduction), Journey to Agartha centres around Asuna, a curious and independent young girl who spends her time relaxing on a hillside with a crystal radio her late father left behind while listening to beautiful yet mysterious melodies with no identifiable source. One day she meets a strangely-dressed young lad named Shun at her favorite spot on the hill and this meeting starts a chain reaction of events that will take her on a long, arduous journey to the forgotten underground land of Agartha.

Time and repeated viewings have not dulled the film for me to any massive degree, while it has exacerbated some of its minor flaws. It still looks visually resplendent, the world and characters are well-realised and engrossing to watch and the soundtrack acts to back up the rest of the film and help it deliver a strong emotional punch. The film still feels a little too long, with the last third in particular suffering from a breakdown in pacing that causes the tension to loosen and make events feel forced at times as all the characters are shuffled around in preparation for the final act. This last item has in particular has grated more and more with each subsequent viewing to the point that I wish that the film was twenty minutes shorter than it actually is. Barring this, my thoughts are the same as my previous review linked above, and I would encourage you to take that a look if you have never heard of the film before. For the rest of this text I will focus on this physical release.

It is important to mention here that I received the DVD version of the film to review - supplied (as is normal) as discs alone so I cannot comment on the packaging. At the time of writing I believe Manga Entertainment are planning to do some unboxing reviews in short order, so you should be good on that front if you are curious. I am keen to highlight that I recieved the DVD version as, while it still looks great at a glance, the visuals do suffer in the format. The lush backgrounds look muddy and indistinct, as if someone had slapped a thin layer of vaseline over your screen. At the same time, characters and foreground objects tend to look harsh and aliased, thin lines appearing jagged and pixelated due to the lack of resolution. To make sure it was not just my TV acting up, I also checked these on my PC monitor where the same issues were apparent. While this is not a deal-breaker and you can get used to it after a while, it does diminish the impact of the film by a noticeable degree, robbing the visual presentation of its normal “pop” and impact. To be honest, a lot of the issues outlined would probably look fine to a first time viewer of the film, especially if you have not watched much High Definition anime content, but I would still say that if you are able to play it then you definately want to get the Blu-Ray version.

Also present on this release is an English dub of the film, which is pretty damn good. I honestly don’t watch many dubs so I can’t really place it on any grand scale of quality, but I felt it was eminently watchable and as accomplished as the original Japanese voice track. Most of this comes from some sensible adaptation and adjustment of the script to remove or rephrase some lines to give for a better flow in English. That being said it is not without issue, with a lot of the single-line background characters having bizarre tempo, and the cast as a whole sometimes stumble over japanese names, but none of this is a deal breaker.

There were some other audio oddities however - I was listening to the movie on a pair of surround headphones and several times throughout the movie the audio jumped around between each side. This may have been the result of a sweet 5.1 audio pan that my equipment could not keep up with, but I wanted to note it here as it took me out of the film (and made me worry that my month-old headphones were breaking!)

Bundled in with the Collector's Edition of the film is a dedicated disc of extras - alongside the normal standby content of trailers for the film there are a few nice surprises. The first of these is the “Actors interview” feature - a series of intercut interviews with the Japanese voice cast was well as Makoto Shinkai himself. While fine to watch, this extended piece feels like filler due to the softball questions being asked and the over-production of the footage. That being said, there are some interesting tidbits hidden within. A more meaty morsel is “behind the scenes of Agartha”, a miniature documentary about the production of the film through various stages including storyboarding, animation, sound work, and leading up to the film's premiere. It’s a very nice and at times surprisingly frank look at how the many different creative people involved made their contributions to the film, and something fans of Shinkai would do well to check out. On the more bitesize side of things there is a music video for the movie’s ending theme “Hello, Goodbye and Hello”, combining animation from the film itself along with some new cuts - it certainly looks nice but the song doesn’t have as much power outside of the film itself. It also contains mad spoilers so watch the film first! Lastly there is a short “the Journey of Makoto Shinkai”, a retrospective of the creator’s works which feels more like a marketing vehicle than anything informative.

Journey to Agartha, aside from a few niggles, is still the same enchanting film I saw on the big screen back in 2011. Probably the biggest compliment I can give it (or the biggest indictment of myself as a massive wuss) is that I still teared up when the ending song started up. Some of the extras included in this release are well worth a look, and the dub is also a very nice addition to the package. While this DVD release is perfectly competent, I would definately say to pick up the Blu-Ray if at all possible to get the full impact of the visual splendour on show.

English and Japanese audio with English subtitles.  The extras disc bundled with the Collector's Edition set contains trailers, an interview with the actors/director, a behind the scenes documentary about the making of the film, a retrospective on the director and a music video of the film's ending song "Hello, Goodbye and Hello". All extras are subtitle only.

8
While it still has its flaws this is a wonderful, visually stunning film well worth the price of admission. This release is pretty good as well!
LATEST REVIEWS