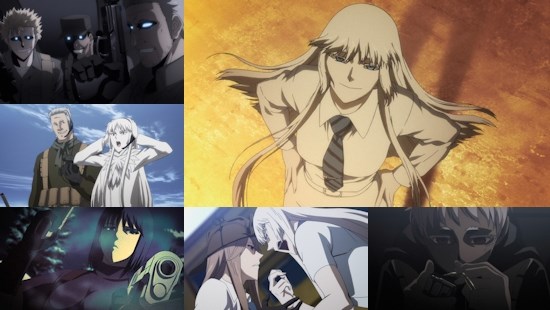 No matter where in the world you look, the entertainment industry has always tried to walk a very fine, and often hypocritical, line when it comes to armed conflict. On the one-hand, it can't help but gawp in wonder at the machines and weapons of destruction created by human hands, and stare excitedly at the effects and aftermath of their destructive power. At the same time, the creators of this entertainment also tend to take a very definite anti-war stance, abhorring the very elements they use to draw in the crowds when it breaks out in reality.

This contradiction between the "awe of war" and disgust at the human costs of such conflicts is both something which naturally hangs over Jormungand at times, but that is also an issue it actively addresses - after all, at the heart of this manga adaptation provided by White Fox sits an arms dealer, surely the centre of any such whirlwind of hypocrisy.

The arms dealer in question is Koko Hekmatyar, an enigmatic and unpredictable young woman who works for her father's firm HCLI, a company which (amongst other things) sells arms around the world and profiting from the numerous wars, rebellions and infractions which serve as quickly-forgotten headlines across the globe. We're introduced to Koko's dangerous world via a child soldier named Jonah - a boy who hates war, weapons and above all else those who peddle them, yet someone who circumstances has ordained now serves as part of Koko's crack private military unit of assistants and bodyguards.

As you might expect, working in the field of war (both literally and figuratively) is a dangerous business - selling arms to one faction in a conflict will quickly make you an enemy of their opponents, and even those who you are dealing with can happily look to stab you in the back or double-cross you in the name of profit or simply keeping their plans silent. It's this constant danger which sits at the heart of Jormungand's story, as she and her crew find themselves in sticky situations in the middle of war zones, or being pursued by larger-than-life assassins thanks to the plethora of bounties placed upon Koko's young head.

There is, of course, plenty of action which springs from these storylines, and given the arsenal of weaponry at Koko and company's disposal there's no holding back once the bullets start flying - whether its attack helicopters or insanely powerful handguns, Koko's crew have no qualms about using the offensive power available to them to its fullest extent. The execution of the ensuing action in this animated adaptation is decidedly variable, to be honest - at times it's thrilling, frenetic and well-directed, but at others it's clumsy to the point of being unbelievable. The series begins with an excellent realised car chase which shows what the series can do when it gets things right, but a later shoot-out in Monaco leaves characters shooting at one another from point-blank range and missing over and over, which seems ludicrous given that its pitching two groups of well-trained killers against one another. Thankfully, these scenes work well more often than they fall flat, and although Jormungand won't win any prizes for animation quality its overall level of animation is consistently good enough not to be distracting.

Jormungand isn't the best all-out action series we've ever seen then, but thankfully it has other strings to its bow. The most notable of these is its cast of characters, personified by Koko Hekmatyar herself as a wonderful leading lady who proves to be more and more fascinating at the series goes on and the constant smile beneath her mask begins to slip. As happy as she outwardly seems to be dishing out guns and missiles to the highest bidder, there's clearly another side to her personality which is hunted at throughout the series, although this in turn contradicts her own acknowledgment that what she does for a living is evil - Koko is a young woman who has no qualms about shooting someone in cold blood herself, it seems. The way that the series, and Koko's character, handles these contradictions is truly fascinating, accepting that people's actions and words can clash against one another and similarly having both Koko and Jonah accept that what they say, what they do and what they wish for may often be in direct opposition.

The same can be said for the show's wider cast, a menagerie of characters with cartoonish, over-the-top personalities that nonetheless carry a sufficient sense of place and humanity to them to remain believable even at their most extreme. It's perhaps here where the obvious comparisons to Black Lagoon begin to crop up - both series manage to humanise characters that are barely recognisable as such in real-world terms, whilst also somehow manipulating the viewer to cheer on its anti-heroes largely out of the realisation that they are the least evil individuals in an evil world. It's a tough task to pull off all things considered, and although Jormungand can't boast quite the intensity of Black Lagoon in any sense it certainly does a great job in its own right to ensure that every story arc is gripping and emotionally satisfying in some shape or form.

With a second series, Perfect Order, still to come (and on the way from Manga Entertainment) we're left hanging cruelly at the end of this series, as forces arguably more powerful than Koko and HCLI begin to coalesce while Koko's own plans remain shrouded in mystery - not that being left hungry for more is a bad thing in this case.

Although its animation style and quality arguably isn't the best advertisement for anime on Blu-Ray, it still looks clean and without issue in this High Definition format, and there's something to be said for the joys of the show's stellar soundtrack from Taku Iwasaki (of Gurren Lagann fame) in a lossless format. Speaking of audio, the Japanese language track is definitely the best way to enjoy this series - it's pitch-perfect in its delivery throughout, which is more than can be said for the English dub which misses its mark far more often than it hits, particularly in the case of both Koko and Jonah who feel like different characters and sound twenty years older than either of them should to boot! With no complaints about the English subtitles employed here, our viewing preferences are simple on this occasion.

As much as we want to resist going too far with any Black Lagoon comparisons, it's hard not to - heck, the two manga publications shared a magazine, and Koko Hekmatyar turns up in a story in an official Black Lagoon art book! Beyond this, both series delve into the darker side of human endeavour in some truly interesting ways, and Jormungand certainly doesn't shirk in its depiction of child soldiers and other damaged individuals born out of a world of greed, violence and conflict. It's a heady blend that won't shock you with quite the same power that Black Lagoon can be capable of, but it's an accomplished piece nonetheless that makes full use of a great cast of characters to tell a compelling story.

Jormungand might want to have its cake and eat it by depicting the horrors of armed conflict while excitedly shouting out the precise names of weapons and attack helicopters, but its willingness to tackle those contradictions head-on as part of its narrative is admirable, and the fact that it's woven into a series of gripping stories makes for a very entertaining series that you won't have to be a military aficionado to appreciate and enjoy.

English and Japanese stereo audio with English subtitles. Extras consist of US cast commentary tracks for episodes 1 and 12, an interview with the English dub's casting director, trailers and textless opening/closing credits.

8
Fascinating characters and strong story-telling makes for a series that stands proud in its own right, marred only by an occasionally clunky depiction of action scenes.
LATEST REVIEWS