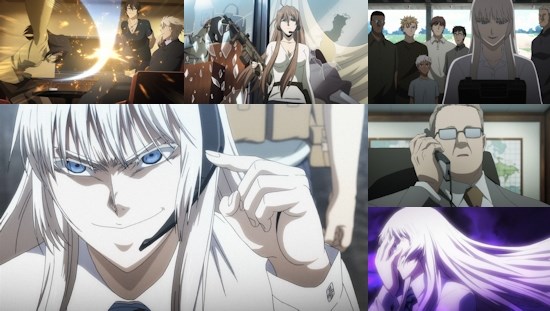 The first season of Jormungand ultimately succeeded in every it set out to do - entertaining, intriguing and occasionally thrilling us, all while introducing a fascinating cast of characters in an equally interesting and murky world of arms dealers and theatres of conflict. More importantly perhaps, that first season of the show also set things up for some even more grandiose storytelling in its second series - now, that series is here in the form of Perfect Order, so can it deliver a satisfying resolution to everything that it has built up so far?

There's certainly plenty to take in as the first series blends into the second, with the realisation that Koko has an undercover CIA agent working on her staff as she ramps up going about preparing for whatever ultimate plan she is hell-bent upon executing. To that end, one of our earliest views within the series is yet another rocket launching into space to deliver a payload, joining umpteen other similar launches that have set many a tongue wagging amongst both Koko's rivals and those who seek to put her under their leash.

Leading the way in the latter category is "Bookman", one of the CIA's top men who has taken more than a passing interest in Koko Hekmatyar and her top secret scheme - not only is he the man responsible for the spy in Koko's midst, but he's also more than willing to use and manipulate some of the other loose cannons in his organisation in the hope of discovering more about his ultimate target; an attempt which almost goes horribly wrong as professional intentions are cast by the wayside in favour of personal vendettas.

Although Koko's plans are a key part of Perfect Order's broad story, much of this second season is still taken up with delving into the personalities, history and motivations of the crew she's surrounded herself in, filling in these character's back stories in enjoyable ways that leave you wishing that there was a third season that simply allowed them all to continue to work together now that these gaps have been filled in - a series that will most likely never happen given that Perfect Order's ending coincides with the climax of the manga upon which it is based.

Eventually, though, these broadly stand-alone arcs give way to us finally getting to the crux of Koko's motivations, as her mask is peeled away to allow us to see what has truly been driving her forward in the world of violence, death and insanity she's immersed herself in. It is, quite honestly, a great revelation that poses a remarkably simple yet thought-provoking question about war, the prevention of such conflicts and the acceptable price to pay to bring these conflicts to a permanent end, and it's an idea that is sufficiently steeped in our current reality (whilst also taking liberties elsewhere as the concept demands of it) to be believable, right the way down to mentions of Julian Assange and Guantanamo Bay.

The only major negative that can be levelled at Perfect Order's final story arc is that it almost entirely wastes the fascinating idea it proposes - after leaving you hungry to see the results of Koko's ambitious (and naive) master plan, you're instead left robbed of any such opportunity in an ending that leaves it open to the viewer to discern what may or may not happen next. As endings go, it feels as rushed as it does inconsequential, and it's a frustrating blip on a series that never shies from examining the results of its cast's actions throughout the rest of the show.

Provided you aren't overly allergic to weak endings (and given anime's propensity to struggle with closing out a series, you should be immune at this point!), there's more than enough delving into the motivations of Koko in particular to make up for it - just as the first half of the series took great joy in setting her up as an enigma, Perfect Order's strongest moments come from seeing that mask crack in the wake of events which unfold around her. At times the strong, confident woman who can laugh in the face of gunfire and death breaks down into a girl scared of the loss of both her own life and (more importantly) those around her, and even the prospect that some of her charges have lost faith in her fills her with terror. This human side to the "monster" of sorts which Koko is previously portrayed as serves as a great lead-in to the show's climactic tale, which again makes its inability to deliver on the potential of that final story all the more galling.

Elsewhere, the rest of Perfect Order feels like a small but noticeable upgrade over the first series, perhaps accentuated by the time that it has to deal with the emotional side of its characters - its action scenes feel sharper, tighter and better planned than Jormungand's first series, its visuals more confident, and its stories resonate more strongly. In other words, if Jormungand impressed you then Perfect Order will only succeed in further doing so.

The presentation of this second series on home video, much like the first, gives us no cause for complaint - the English dub is solid even if we do prefer the Japanese language treatment, as are the English subtitles. Video quality is good on the show's Blu-Ray edition, even if its over-reliance on film grain as a post-processing effect isn't to the liking of some - it can indeed be a little over-bearing in places, and although it has its uses it certainly wasn't the smartest production decision White Fox made from the point of view of Jormungand's visual treatment.

The first season of Jormungand might have needed to make a place for itself in the midst of a sea of Black Lagoon comparisons, but in comparison Perfect Order has enough strengths to strike out in its own right with a well-realised story and some superb character development that mixes entertainment value with more thoughtful and introspective fare wonderfully. If it weren't for such a weak ending to the show's story we'd be raving about Jormungand: Perfect Order from the rooftops as one of 2014's must-buy series, but considering that disappointing finale we'll just recommend that everyone consider giving it a watch as a very strong series instead.

English and Japanese stereo audio with English subtitles. Extras consist of US cast commentary tracks for episodes 15 and 24, an interview with the English dub's director and cast, trailers and textless opening/closing credits

8
Perfect Order takes the formula of Jormungand's excellent first season and improves upon it in every area, let down only by a weak ending.
LATEST REVIEWS