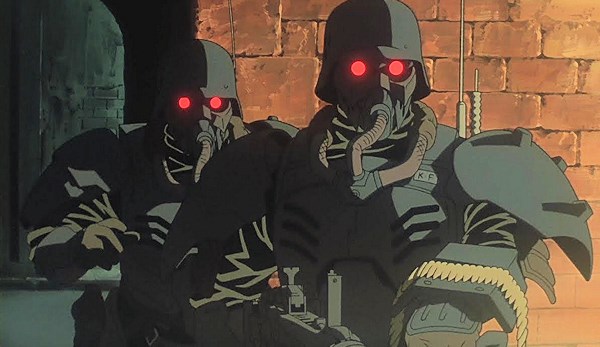 Jin-Roh is a bit of a strange beast, but one I'd say is well worth a viewers time. Mamoru Oshii (Ghost in the Shell, Patlabor 2), produced the film and wrote the script based on his Kerberos Panzer Corps manga series (partly serialised in the UK over a haunting pair of issues of Manga Mania), whilst Hiroyuki Okiura (A Letter to Momo) directs with almost the entirety of the Production I.G.’s Ghost in the Shell team on animation duties.

The result is a film that is incredibly smooth with animation that could easily have been live-action, telling a haunting story of damaged souls set in an alternate 1950’s Japan (strongly hinted to be one where WWII did not have the same factional breakdowns and Japan found itself occupied not by the United States but Germany) where a push for advanced manufacturing & industrialisation has created tensions that have overspilled into open violence on the streets. This results in the creation of a paramilitary police unit to deal with insurgent groups, covering for an ill-equipped police force and illegal military intervention.

This is where we first meet Kazuki Fuse, a rookie member of the unit who can’t bring himself to shoot a young female suicide bomber before she detonates her package. Court-martialled and sent back to training, Fuze’s difficulty in coming to terms with his actions lead him to Kei, the young woman’s older sister. The two strike up a somewhat melancholic romance that plays out amongst the changing landscape of Tokyo and the factions at work making power plays around them.

Even if you’ve never seen Jin-Roh, or heard of Kerebros Panzer Corps, odds on (if you are a fan of anime or manga) then you will be struck by familiarity once the film begins: the design of the Kerberus powered armour remains an iconic one – evocative of WWII-era German stylings (primarily  the distinctive helmet and what appear to be evolved versions of the legendary MG-42 light machine gun), with heavy armour plates and the glowing red eye-lenses giving the unit individually and en-masse a demonic visage. Overall the whole package is uniquely recognisable, inspiring designers to this day (for example the Chasseur & Veteran Kazak units from the Infinity skirmish game).

Equally the way the film plays out against the background of a divided and changing Tokyo will be familiar if you have ever seen Patlabor 2 or Ghost in the Shell, and is haunting to say the least. The script plays up the wolf angle with repeated readings of lines from Little Red Riding Hood (and not the more sanitised version most are familiar with), as well as use of wolf imagery and red as a spot colour.

Fuze & Kei’s story has a certain inevitability to its outcome, but how it all plays out is very well done. Of course, coming from the talented folks at Production I.G. as it does, when the action kicks in, it is something of a showcase. This is a bloody tale and the animators don't shy away from showing the gruesome details, so be warned.

Perhaps not essential viewing, but Jin-roh is worth your time, forming an intriguing companion piece to the aforementioned Patlabor 2 and Ghost in the Shell as examples of mature but wildly differing projects from the same production team.