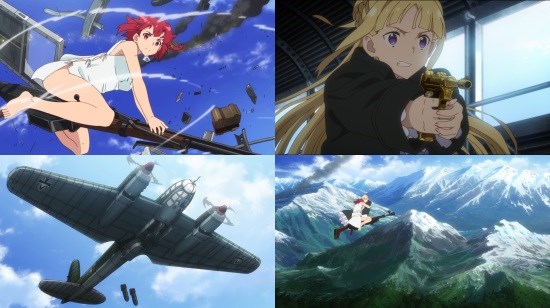 Its magic season in anime this autumn - with at least four magical girl series and two shows about actual witches (both set in alternate World War II!) there’s so much magic going on that you’ll be seeing broomsticks in your sleep. So without further ado, a wave of UKA’s magic wand let's dive right into Izetta: The Last Witch and see if we can see stars!

The Second World War is about to break out across the world as Germania begins to flex its military muscle and annexes several small countries. As the conflict threatens to engulf the small country of Elystadt, Princess Fine sets out to negotiate a political marriage to bring Britain into the war. Instead though she discovers an old friend, the witch Izetta, and with her power comes the possibility that Elystadt could be saved. Unfortunately, the bombs have already started to fall as the Germanian tanks and infantry begin their advance.

Stop me if you’ve heard this one before – alternate version of a real war where a witch intervenes and stops the battling armies with her incredible magic? Yes it really hasn’t been all that long since Maria the Virgin Witch, has it, but fear not as we’re now in a much more modern setting with more tanks, more girls (though sadly not girls in tanks just yet) and a much more serious plot line. All jokes aside, whilst there are some surface similarities between Izetta and Maria this is a very different show, and frankly it’s brilliant. These opening episodes carefully set up the geography and politics of the situation along with how Izetta’s powers work and how she and Fine know each other, and the result is an incredibly strong setting interspersed with character beats and incredible action sequences. What action sequences they are too! Whilst the second episode kicks things off ‘simply’ with Izetta using an anti-tank rifle as a broom in a dog fight against fighter,s the third episode is like the insanely cool reimagining of the climax of Bedknobs and Broomsticks you never knew you wanted until now!

Masaya Fujimori’s direction is spectacularly good across these four episodes, with only a few moments where it’s clear his vision had to be restrained by the budget and schedule of the series, but by and large everything just works exactly as you want it to. The setting allows him to indulge in some brilliantly detailed work too – one sequence shows a soldier in the trenches as bullets and bombs fly with confusion reigning as officers and friends drop and the whole thing is pitch-perfect in both pacing, visuals and sound design. He’s only had a few turns in the big seat before but if he can finish off the series as well as he’s started it then he’ll clearly be someone to keep an eye on.

The music and visuals are both fittingly great here, with May'n turning in the ending theme and Aija-Do Animation Works handling the production, all ably supported by a cast who are really doing a great job, with relative newcomer Himika Akaneya as Izetta putting in a great performance alongside industry veteran Saori Hayami as Fine.

This is easily one of the best shows this season has to offer and its going to be great fun to see how the rest of the story unfolds. Whilst magic is the name of the game for this season, Izetta: The Last Witch is going to be the show to make the crowd pay attention.

9
A magical beginning to an enchanting series.