Isao Takahata and His Tale of the Princess Kaguya 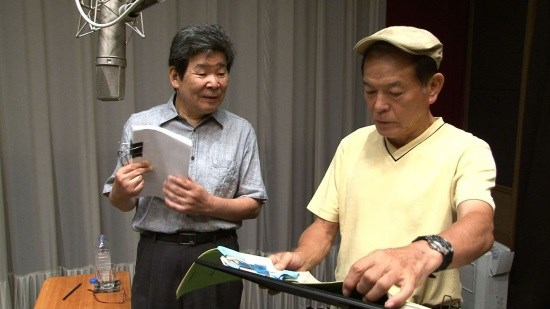 Isao Takahata and His Tale of the Princess Kaguya

At 78, Isao Takahata looks drained. As he searches for a location to do an interview at some time during the later stages of production on his latest and sadly final work, The Tale of Princess Kaguya, it’s quite clear that, for now at least, the lengthy production of the film is taking its toll on him.

After declaring one room far too hot and finding himself locked out of a hopefully cooler screening room, Isao Takahata leads the interviewer to a sofa in a corner and settles himself down. The film's production which has been in full swing for a colossal amount of time (933 days is mentioned early in the film which is the likely time spent in full-on production, the planning having begun several years prior) has been both rewarding and troubled. When asked “what kind of movie are you making?” the director simply replies “How should I know?”

The Tale of Princess Kaguya’s production, as it turns out, is one huge experiment as Isao Takahata sought to push the limits of his chosen medium. It’s not the first time of course that he has attempted such an experiment. His previous feature, Meet the Yamadas, was also a big step away from the normal conventions of anime production. Like The Tale of Princess Kaguya it also caused many problems during production. In fact, Meet the Yamadas reportedly caused so much disruption to Ghibli that when Miyazaki began production of Spirited Away he declared that Ghibli would never make a film that way again!

Whilst Isao Takahata himself certainly appeared to have no desire to return to film-making, he was eventually lured back after eighteen months of meetings with producer Yoshiaki Nishimura who very much wanted to see a new work by the veteran director.

Unlike Hayao Miyazaki who tends to work on the visuals first sometimes without any script at all, Isao Takahata elects to create The Tale of Princess Kaguya in a way much closer to the way American animation is produced. Not being an artist himself he writes the script and chooses to record the dialogue with the cast first then animate to their voices and expressions. As a director, he clearly loves working with the cast, discussing character motivations and then allowing the cast to bring life to their characters, only stepping in if they stray too far from the film’s vision. Sitting in the booth with the crew (along with famous Ghibli producer Toshio Suzuki) Isao Takahata happily munches through an enormous crate of blueberries whilst giggling away as Takeo Chii (playing the Bamboo-cutter) method-acts his way through a song – dancing around and blowing raspberries into his elbows.

With the cast recorded the dialogue, it was then time produce the animation. But for his new film Isao Takahata’s vision had moved beyond Ghibli’s original scope. A new studio, Ghibli Studio 7, was created for the production and a whole crop of new staff are employed, many of whom are veterans eager to work with the legendary director on his greatest project to date.

Isao Takahata stated that “You can draw pictures in different styles, but with cel animation you’re stuck in one style. I want to break through that”. In order to achieve this vision he decided that, rather than using the clean, finished artwork of a normal production, The Tale of Princess Kaguya will instead use rougher sketches, almost like you’d see in an artist’s sketch book. This change from a ‘clean’ style is so different to the norm that the artists working on the project had to be almost retrained to produce the ‘high energy, quick and dirty lines’, whilst resisting the urge to clean the art up too much. The backgrounds were also painstakingly rendered in watercolours which meant that unlike normal productions, mistakes cannot simply be painted over and the works cannot be properly evaluated until they’ve dried, due to the nature of the medium.

Isao Takahata used computer editing and visualisation to direct the film on a frame-by-frame basis requesting retakes to make minute-but-necessary changes in the flow of the scene and sometimes adding or removing single frames at a time to adjust the scene. When it’s all arranged to his satisfaction, the film is processed for colour. The work is painstaking and controlled on the most detailed level possible right down to subtle changes of colour inside a characters mouth. The film makers spend up to 6 hours for each of the film’s 1423 cuts during this process. Achieving Isao Takahata’s dream was a truly painstaking process!

The results of all this meticulous production, is a film that is breathtakingly beautiful and visually unique. As Isao Takahata met with Joe Hisaishi, who agreed to work on the score for the production and is very eager to finally work directly with the man who first picked him to work with Hayao Miyazaki on Nausicaa, the look of the film has truly stared to come together in a very special way.

Unfortunately all this has not come without cost and it starts to become apparent that the film is starting to come dangerously close to its release date with the production unfinished and the storyboards still incomplete. There are distinct echoes of Shirobako here as the difficult decision is made to stop all production other than work on the storyboards and the film's planned dual release with Miyazaki’s The Wind Rises is scrapped with the release pushed back to allow production to be completed.

The story of the production is fascinating, but Isao Takahata himself is also a fascinating individual. He’s so full of life and so clearly happy to be realising his vision for the project. Whether he’s riding his bicycle or gleefully confessing to fellow staff members that he has no idea what they should do, the documentary portrays him as an impish rogue. The glimpses of his life outside the film are wonderful too. His Princess Kaguya-themed birthday party is a treat to watch as he puts on a hat and addresses the staff through a megaphone covered in flowers. There are also glimpses of some incredible archive photographs showing Isao Takahata and Hayao Miyazaki working together as young men.

Whilst obviously never intended as such, Isao Takahata and His Tale of the Princess Kaguya, is now a chronicle of the final film of one of Studio Ghibli’s founders who sadly passed away in April this year. Seen now in this light there's an undeniable sense of melancholy particularly in the latter half of the film. As Isao Takahata, Hayao Miyazaki and Toshio Suzuki meet together in Miyazaki’s home after he has held a press conference announcing his retirement (for now), Miyazaki jokes “if we died now no-one would say we died young. Suzuki’s at the most risk with that belly on him”. More poignant is Takahata himself backstage after the premiere of the film – “I wish I still smoked”.

Isao Takahata was one of the founding members of Studio Ghibli and the director of some of its most classic works such as Grave of the Fireflies and Pom Poko. He sadly passed away from cancer in April this year at age 82.

10
A must-see work for fans of anime production and of Isao Takahata.