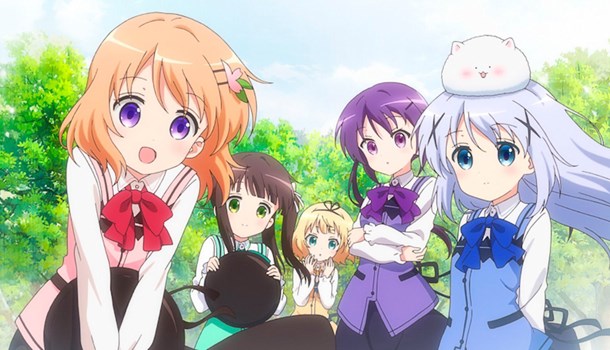 Is the Order a Rabbit? is a slice of Life show revolving around cute girls working part-time in a coffee shop. We see the main cast of characters balance school life, working and socialising with one another in a rather relaxed way. The show also introduces a talking rabbit by the name of Tippy that appears to be the master of the coffee shop – The Rabbit House – where most of the series takes place. Tippy is an Angora Rabbit, a little white fluffy ball who sits on the head of the daughter of the coffee shop's owner, who happens to be the rabbit's granddaughter and one of the few people who know about the rabbit's situation. With this surreal and fantastical element you'd expect the show to delve into more supernatural or fantasy style comedy, surprisingly however, it bases all of the comedy and episodes on the everyday lives of its main characters. The rabbit element only appears occasionally as short little jokes here and there. The main focus of the show is cute girls just living out their everyday lives working in the various coffee shops in their charming town whilst going to school and hanging out.

In the past I reviewed the series' first three episodes when the show started streaming seven years ago. At the time I was not a coffee drinker, so the various references to coffee and the culture around drinking it flew a bit over my head. Since then I have become quite the avid coffee drinker especially within the last year of lockdown giving me incentive to try out various brewing methods, grinding fresh beans and making coffee to fit my tastes. When the show talks about coffee I have quite the new-found appreciation for what they are conveying. That being said, a knowledge or enjoyment of coffee isn't necessary to fully enjoy the show. There are plenty of other things to pull you in, mainly all the rabbits in the show and how the small little town they live in seems to have a wild rabbit population that lives in the park and allows people to walk up and pet them. As mentioned previously, the odd circumstance of an old man turning into a rabbit is barely addressed. The show could have used this to convey a much deeper plot, and at times it feels like it'll take the plunge with the introduction of a character in the show who knew the former master of the Rabbit house before his transformation. Yet this aspect of the show is mainly played for comedy and the occasional running gag.

The show makes use of several of these, ranging from misunderstandings about a character's circumstance to characters wanting their relationship to be a certain way. The obvious examples of these are that all the characters thinks one girl is a rich refined lady based on how she carries herself and the school she attends. An example of relationships is one of the girls wanting to be seen as another’s big sister and wants to get closer to her in a platonic sense. The characters of the show themselves first appear as your standard stereotypical cute girl cast to round out the show and bounce off each other. But as things progress we see character development and that each girl has a bit of depth to them.

For the most part the show is rather laid back with nothing of huge significance happening. While some may find this approach to be a bit strange, it's the perfect relaxing sort of slice-of-life that works as antidote to the current state of affairs in the real world.

Rather than binging the whole show in order to get it watched and ready to review, I took my time with it, electing to watch one to three episodes an evening after work. This is where the magic of the show shines. There is a phrase I've seen used quite often in anime -  "Healing show". Something to watch after a stressful day at work. This show fits that bill very well. You get to know the cast and it feels like you're watching a group of friends just hang out and not really worry about anything. It's a laid back coffee shop setting with a cast of fun characters and the perfect blend to help relax and mend a tired heart.