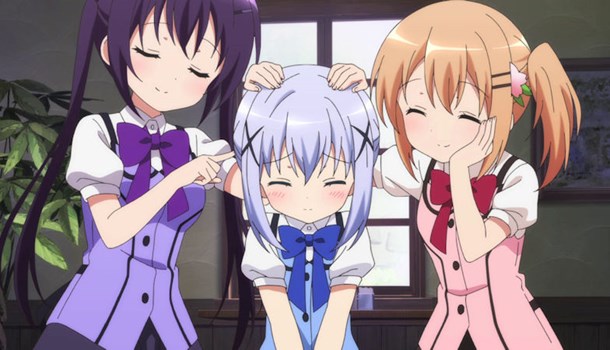 Following directly from previous seasons, Is the Order a Rabbit? Bloom marks the start of the third season. This slice of life comedy revolves around cute middle-school aged girls working in the coffee shops of their town. The title of this season, "bloom",  is a pun on the phase of coffee brewing when hot water first makes contact with the coffee grounds, releasing carbon dioxide and "flowers". This is symbolic of the underlying theme of this season, the transition period facing several of the characters and their preparations for coming change. These decisions include which high school to enrol in for the younger characters, and the oldest high school student of the cast deciding on further education and the eventual job they'll have as an adult.

While the series focuses on certain characters preparing for high school or college, this aspect doesn't affect any of the overall plot in any way. Things continue with the girls working in the coffee shops, participating in school events and enjoying holidays together. We see events throughout the year in chronological order, ranging from summer markets to Halloween and even Christmas/New Years events. This gives the girls opportunities to dress up and decorate the town/shops in a rather festive manner. Like the previous seasons the show is focused on cute girls doing cute things in a coffee shop with a bit of an influence from Rabbits. The main running joke this time around is the popularity of a new TV show called Phantom Thief Lapin. That is a parody and amalgamation of Phantom Thief Kaito and Lupin the third.

Many of the characters cosplay and act like this character throughout the season as the character was written in-universe by one of the side characters and based her design on one of the core cast. Along with this we have rather episodic and stand out episodes where the side characters get a bit more focus and depth in place of the core cast. Bloom is expanding on the characters, giving them more to do and fleshing them out. There are times when characters will notice and comment on how they have been influenced by everything that has happened so far and how they have all changed somewhat. Even though barely a year passes and noting much in the way of plot develops we do see a few genuine heart-warming character moments.

This gentle pace and charm is the main draw of the show, a slice of desirable life which concentrates not on plot progression but instead the small character moments, the jokes and the overall heart-warming atmosphere to bask in and enjoy. We get glimpses of back-story for certain characters and see them slowly grow and mature throughout, but despite this, nothing really progresses. It doesn't feel like it needs to push things forward all that much. The series has really hit its stride and realises it's at its best when things are comfy with the characters just participating in an event where they all get to enjoy each others company. The show is nothing more or less than a light-hearted, heart-warming comedy that focuses on coffee and rabbits.

While others may be a bit annoyed that there is no overall plot and that this season is just more of the same; it is thankfully saved with how endearing the characters are, the way the jokes land and how heart-warming some of the more emotional beats are. This is the kind of anime to watch after a stressful day at work or to enjoy on a Sunday morning with a fresh cup of coffee to forget about all the troubles of the world. Like previous seasons, the art is clean and bright. With beautiful background art. The music is gentle and relaxing, while the characters have truly settled into their roles.

Is the Order a Rabbit remains a perfect blend of cute relaxing comedy, a show that knows exactly what it is and executes its brief perfectly. If you've invested in the previous two seasons then you can rest assured that this is more of the same.

8
More of the same. A familiar blend of comfy slice of life comedy