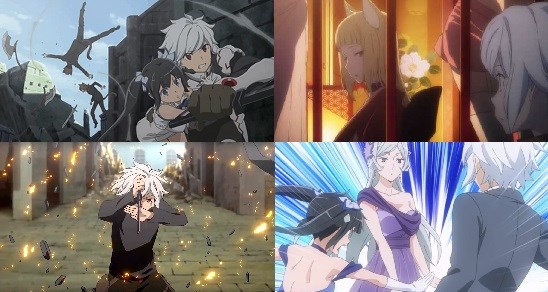 Among all the Familia adventurer bands which explore the fantasy land of Orario, the Hestia Familia is the tiniest. The titchy goddess Hestia only has one hero serving her, and whereas the other gods and goddesses playing around in the mortal realm have big estates to house their Familia, Hestia is still living in a tumbledown squat. Nonetheless, even if Hestia might be a dinky little pipsqueak of a divine avatar, her expansive bust is a physical reflection of her great ambitions that are far larger than her current circumstances. Even if she only has one hero in her roster, the young boy Bell has a faithfulness and belief that makes him worth ten. Bell is continuing to carve his way through Orario’s endless Dungeon, determined to raise his level and win loot by defeating monsters to improve the Hestia Familia. With the support of the firm friends that he’s made on the way the good-natured and diligent Bell is making fine progress and looks set to impress Orario’s adventurers by achieving Level Three in record time. There are still plenty of obnoxious senior adventurers that want to put young upstarts back in their place though, and Bell’s celebration after a successful dungeon crawl is soured by the sneering and sniping of another group, starting a row which escalates into a full-on tavern brawl. Unfortunately, those adventurers were members of the Apollo Familia, one of largest in Orario with a power matched only by its patron god Apollo’s swaggering arrogance. Inflated with hauteur, Apollo has now made it his mission to crush the measly bug of the Hestia Familia – how can Bell and Hestia possibly hope to fight back?

Is It Wrong To Try To Pick Up Girls In A Dungeon?!: Familia Myth II – to save my impacted knuckle joints from being worn down to nubs by excessive typing, I will be shortening to its common abbreviation Danmachi after its full Japanese title, Danjon ni Deai o Motomeru no wa Machigatteiru Darō ka – is not only wilfully otaku with its textbook Over-Long Light Novel Title, the show equally doesn’t make any accommodation for newcomers. Danmachi assumes that you’re already along for the ride from the first season and leaps straight back into the action with no recaps or retrospective references that provide any opportunity to get back up to speed. Nonetheless, I would still say this anime is perfectly accessible for new viewers and it’s not necessary to have bought into the previous editions of the story to enjoy this one; you can buy it confident that you’re not being excluded. This Season 2 of the anime is actually my very first Danmachi experience - I’ve not read any of the manga or light novels, nor have I watched season one of the anime – but the setting is straightforward and I found it quite easy to pick up things as I went along. The only minor stumbling block in understanding I encountered was reminding myself that Danmachi is a straight fantasy and not an isekai, as even if Bell did not drop into the story after an intimate encounter with Truck-kun his references to coming to Orario from a far-off place, along with all the levelling-up and a videogamey Dungeon Master-style labyrinth to grind through, sometimes make you think that he did. Once you’ve made that adjustment though you’re happily off and away.

The first episode is actually quite a fun one – following the pub fight Hestia and Bell get invited to a fancy ball at the Apollo Familia mansion where Apollo announces his intention to destroy them (after all, the Devil is a gentleman of wealth and taste) and seeing the cast dolled up in their glad rags for a night out is actually pretty cute and a colourful way to start off the series.

Pretty outfits segue into pretty girls. Out in the wider world Danmachi is perhaps most (in)famous for the… disproportionate bosom of the “oppai loli” Hestia – on the broadcast of the first season of the Danmachi anime Hestia’s peculiar method of pushing-up her bust by looping a ribbon underneath it became a brief viral sensation with lots of girls treating us to attempts to replicate it in real life, sort of like the brasserie equivalent to the Bubble Tea Challenge.  It’s true that Danmachi boasts a bevy of beautiful babes – and the girls strut their stuff for a swimsuit contest in the end-of-season bonus OVA – but for all the toned midriffs and long legs it’s interesting that the anime actually goes to considerable lengths to avoid nudity. When the cast strip off for a collective bath scene, strategically-placed bucket handles and rubber duckies (not dissimilar from another meme-worthy scene from the French fantasy cartoon Wakfu) ensure that there is not too much hanging out to distract you from the emotion of Bell’s heart to heart on companions and comradeship. The anime even teases you about it, with some shots showing a whole quackin’ flock of duckies appearing out of nowhere.

The majority of the second half of the season is given over to the “Haruhime Arc” of Danmachi featuring a storyline where Bell seeks to rescue a Renard (the in-universe term for a fox-girl, basically), who is an old friend of one of his Familia and has fallen on hard times and been sold to a brothel in Orario’s red-light district. Of course, “red light district” immediately makes everyone’s fanservice detectors start bleeping (the collection of Japanese commercials included in the on-disc bonus content even refer to the Haruhime arc being here “at last”, a cheeky reference to what the audience really wants). Again, though, it’s surprising for how much restraint the anime actually exerts. Even though there’s a whole Arabian harem’s-worth of chocolate prancing around in belly-dancing bikini bits, there is no on-screen sex and any nudity is again strictly masked by silhouettes and discretionary camera angles. There are only two very brief instances which stray beyond PG-13, one instance of “symmetrical docking” which flashes past in literally one second, and the only actual nudity we see is actually male, involving a brief flash of a guy’s backside while locked up in a BDSM dungeon. Suffice to say, it ain't exactly Interspecies Reviewers! This is another feature where Danmachi is entertainingly self-aware – Haruhime, the Renard, works in a Japanese Floating World-style establishment and so she’s dressed practically like a nun in a heavy multi-layered kimono – one of the harem girls who’s barely dressed in diaphanous wisps tells her to go home “before she catches a cold”.

The way Danmachi keeps itself on the lighter side of ecchi indicates its confidence that it has a proper story to tell and isn’t just a fanservice vehicle – is that belief warranted? Bell does have to square off against a bunch of interesting villains. While this season’s first antagonist Apollo is a fairly common-or-garden over-arrogant aristocrat, all the sultry svelte sinuous sirens of the Haruhime arc do have a snaking venom bite, too. The red-light district of Orario is run by the Ishtar Familia, and while Danmachi is more than a little loose with its pagan cosmology this is one instance where it successfully pulls off a more sinister undercurrent. These days Ishtar is sometimes regarded as a love goddess like Aphrodite with some references in the historical record suggesting that her temples performed sacred prostitution, but properly Ishtar was never a lover, she was a maneater – The Epic of Gilgamesh denounces her as a succubus who cruelly saps the vitality of her paramours – and that’s something that does successfully come across in her plot, the ultimate goal of which has nothing to do with sex at all. The season is rounded off with a couple of episodes brushing off the god Ares, and Danmachi manages to do something quite interesting with him as well. War god Ares would seem to be a fairly one-note rip’n’tear concept, but Danmachi quite skilfully and with some originality turns him into comic relief – energetic and enthusiastic more than raging and wrathful, and someone whose devotion to commanding vast armies actually only sets him up for constant failure, as the power-levelled adventurers of Orario easily brush off the mobs and barely even realise that there’s a war on, apparently. He shows up all too briefly and I hope he’ll get more attention in season three.

Action in Danmachi is fairly scattered, with Bell’s swordfights being short but intense – you do feel the impact of each clash. Although he is the star of the show, he’s not overpowered and his wider group of friends and allies do demonstrate their worth in supporting him so there is decent variety to the action. The fact that he has so many friends and allies though can present something of a problem if you think about it – while the Hestia Familia only initially only consists of Hestia and Bell, within a very short while they have suddenly acquired a whole host of fresh recruits who join the Hestia Familia after they beg their own gods to let them transfer out – and they let them go with a nod, just like that? I don’t know, I just feel that when your backs are inscribed with magical tattoos and you swear solemn oaths of submission and obedience to actual deities in literal blood rituals, changing your allegiance should be a more involved process than switching between bibs and skins in a game of football in the park. One other feature where Danmachi quite eye-rollingly reverts to trope is the discovery that Haruhime, despite working in a brothel, is actually completely virginal and never did the deed. I know why this is quickly inserted into the script – so that otaku can enjoy their pure waifu – and in fairness the script doesn’t pull the face-turn out of nowhere and it is anticipated with scenes such as Haruhime fainting when she sees as little as Bell’s collarbone, but it does undermine all the tearful heroic dialogues from Bell that he won’t abandon his new friend regardless of what she thinks she thinks should be shameful.

8
Games of the gods don’t have to be cosmic and apocalyptic, they can also just be fun.