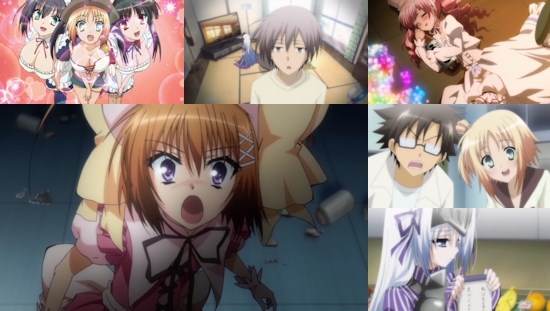 Is This a Zombie? Of The Dead - Season 2 Collection

It may not have been the kind of series to set the world alight, but Is This a Zombie's first series was nothing if not fun to watch - a light-hearted show with a ludicrous premise that was best served while playing its scenarios for laughs rather than the kind of deeper, darker fare that it attempted on occasion with less success.

Regardless, 2014 has granted us a chance to re-join Ayumu Aikawa and his motley household containing his zombified self, a "Magical Garment Girl", a necromancer and a vampire ninja, while Aikawa also finds himself (or in one particular case, his pert rear end) the object of attention for a number of other girls, only one of which can really be considered as anything approaching normal.

After the somewhat fraught ending to the first season, this second series on DVD opens with another OVA episode, providing a trip to the pool with all the trimmings (a staple part of any anime series of course), and some birthday celebrations for Eu. I would say that the story begins properly at this point, but to be honest there isn't really much of a story to speak of - the only real overarching plot to speak of is the introduction of an (admittedly rather marvellous) new character in the form of an alcoholic gothic lolita who most of the cast assume exists as nothing more than a fantasy of Aikawa's. However, exist she does, and she has a part to play in proceedings that also reintroduces an old enemy from the first series into the bargain.

For the most part however, Is This a Zombie? Of The Dead simply wallows in the joys of following Aikawa around, bringing him the lows of having his existence as a substitute Magical Garment Girl revealed to all and sundry, and the highs of the surprising celebrity value this in turn grants him, all while his growing harem of doting girls eye him from afar for no particular reason other than the fact that he's kind of a nice guy.

Given that its wider narrative was never one of its strong points, this makes Is This a Zombie's second season something of an occasional joy to behold - it isn't wall to wall funny, but every episode guarantees at least one laugh out loud moment, and when it puts its mind to it the series can be truly hilarious. Admittedly, some of this humour is purely referential (a discussion suddenly revolves around Full Metal Panic at some point, and a wonderfully timed throwaway reference to Street Fighter II also tickled me greatly), but other aspects of the series make full use of both its lovable cast and the absurdity of its setting to good effect.

Needless to say, a lot of this enjoyment is predicated upon how much you liked the cast and concept the first time around - if you were amused by series one, Of The Dead will likely entertain you even more thanks to its comedy focus, but if it left you as cold as Aikawa's necrotised flesh then there's nothing to change your mind here. Well, unless Haruna wearing cat ears prancing around in a bikini is enough to alter your opinion...

Outside of its comedy and what semblance of a plot it can scrape together, Is This a Zombie's presentation is acceptable and achieves everything that it sets out to without being mind-blowing - it has the chops to bring about its visual comedy (and fan service, of which there is no shortage) in a sufficiently pleasing manner, and the voice cast's enthusiasm is infectious. Anyone with an investment in following their favourite voice actresses will also doubtless enjoy the continuing gag where the normally mute Eu is voiced by a different actress in each episode when she appears within Aikawa's fantasies, with star turns in this series including Yui Horie and Yu Kobayashi - a gag which extends to vignettes that close out each episode. Alongside this, the English dub continues to match the Japanese treatment well, equalling that enthusiasm to make for an enjoyable experience in its own right.

Much like its predecessor, Is This a Zombie? Of The Dead isn't likely to live long in the memory or be a fixture in "best of" lists come the end of 2014 - but that really isn't what it aims to be. If you want to wash away any post-Christmas depression with a colourful and silly slice of entertaining humour that is as undemanding as it is mischievous, this certainly isn't a bad way to kick off 2014 with a few giggles.

7
It ditches any major attempts at story-telling in service of its comedy and general silliness - a decision that works in the show's favour to provide a decent slice of light-hearted entertainment.
LATEST REVIEWS