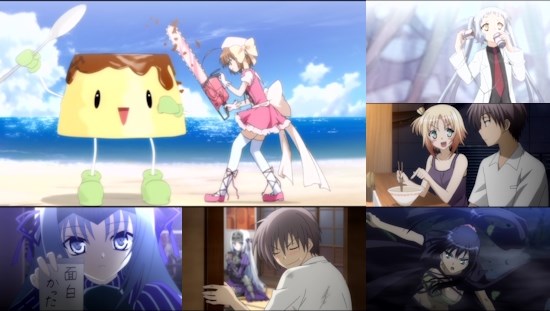 Is This a Zombie? - Season 1 Collection

If you're anything like me, you're probably tiring of the use (and overuse, indeed) of zombies as a story-telling device - the novelty of the undead has well and truly worn off by this point, and there's little more left to be done with the tired old tropes left in the wake of the zombie media invasion.

However, one thing we haven't explored to any great degree is life from a zombie's point of view - enter Is This a Zombie, a comedy light novel adaptation that quickly answers the question which underpins its title. Yes, protagonist Ayumu Aikawa is a zombie, having been brought back from the dead after a rather unfortunate encounter with a serial killer. As a result, he now has an immortal, self-healing body which proves invaluable throughout the series, albeit offset by a complete inability to tolerate direct sunlight. Still, at least his palate is interested in more than just brains. Oh, and he now lives with the necromancer that saved his life by resurrecting him in this zombified state, a mute yet cute armour-clad girl named Eu.

Away from his normal (well, relatively speaking at least) high school life, Ayumu is understandably determined to track down his killer and thus spends his life wandering the streets in the hope of stumbling across them. Instead, his nocturnal exploration lands him in even more bother, and before he knows it our unlikely hero is teaming up with a chainsaw-wielding Magical Garment Girl and vampire ninjas as his situation gets weirder and weirder. When the only way to defend yourself from the strange and menacing "Megalo" which keep appearing around you is to transform into a cross-dressing magical girl... well, a zombie's gotta do what a zombie's gotta do.

If you haven't guessed from this synopsis, Is This a Zombie does everything that it can to be as zany and off-the-wall as possible - beyond its sitcom-esque roots are all manner of wacky enemies to be disposed of in equally wacky ways. This all-out approach to the show's craziness actually works in its favour - even when the series threatens to get bogged down in situations or details, it remains entertaining on account of its sheer energy and enthusiasm alone, with every scene drizzled with just the right amount of comedy to offset some of the more serious undertones that surface now and then.

Although I wouldn't want to categorise the series as a laugh riot, it certainly generates enough laughs to be classed as funny while also ensuring that there's sufficient amusement pervading every episode to also be labelled as fun. A lot of this entertainment value comes from its cast of characters - yes, it drifts unapologetically into harem territory very early on and continues in that vein throughout, but the interactions between the cast never gets tiresome and the sitcom styling provides plenty of moments of light-hearted entertainment. Even the show's fan service is of the "light" variety - nudity is still censored, but you may find yourself getting fed up of all the panty shots by the end of the series, especially given that it closes out with some particularly overt fan service staples once its main story arcs are done and dusted.

Speaking of those story arcs, this first season of Is This A Zombie has a couple of major plots to work through - neither of these stories will blow you mind, but again the strong cast of characters and the pleasing interactions between them gives these tales legs and even manages to provide some quite touching moments into the bargain. This isn't the kind of narrative tour de force that you'll be talking about for years, and from time to time it threatens to get in the way of what the series does best, but taken as a whole it gives a satisfying backbone to all of the madcap nonsense on the show's surface.

Visually, the show does a good job of matching its story-telling insanity, with strong character designs that are obviously carefully targeted at an otaku audience yet satisfying nonetheless, and in spite of being a relatively low-budget affair the animation quality holds up pretty well for the most part. The presentation on this UK DVD release also can't be faulted, with a good transfer and virtually no subtitle errors to speak of. The show's English dub is largely solid, although Ayumu's English voice is a little too droll for my liking, leaving me scarpering for the original Japanese audio at the earliest opportunity.

There really isn't a whole lot to say about Is This a Zombie beyond our assertions that it's a whole lot of fun to watch - even if you're fed up of the constant stream of supernatural anime of late this tongue-in-cheek take on all of those tropes is enjoyable in its own right, and the show knows how to get a laugh and put a smile on your face. Provided you don't find its fan service elements over-bearing, there's no shortage of entertainment to be found here in a series that can also surprise via moments of well-placed emotion. If you're looking for an excuse to stay indoors out of the summer sun, then this series is certainly preferable to becoming part of an undead horde.

7
Is this a good series? Yes, for the most part it really is.
LATEST REVIEWS