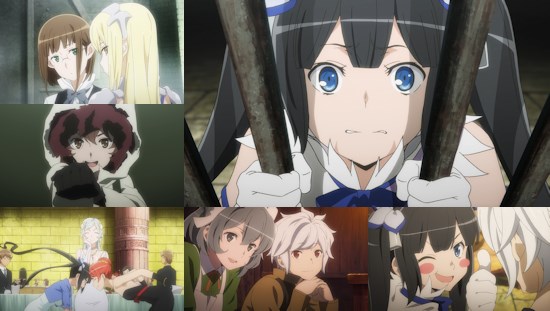 Is It Wrong to Try to Pick Up Girls in a Dungeon? Complete Season 1 Collection

While villains and the misguided might want to discover and harness the powers of the gods, it turns out that the gods themselves find the career path of a deity decidedly boring. With little to do rather than look down upon the world, the gods of this story have instead chosen to forgo most of their powers in lieu of tethering themselves to the earth to find entertainment living amongst the populace in the hope of living a more exciting existence.

While the world's rules prevent these grounded gods from venturing forth to find adventures of their own, these individuals have instead become the lynchpin of support for the various brave souls of various stripes who have chosen to take on the role of fighting their way through the immense dungeon which also exists here - thus creating a system of "Familia" presided over by a god who take under their wing any adventurers who catch their eye.

Is It Wrong to Try to Pick Up Girls in a Dungeon sees us follow one particular fledgling adventurer - Bell - who is dead set on following in this grandfather's footsteps and becoming a worth dungeon-crawler... not just in the name of slaying monsters and earning a living wage, but also in the hope of finding the girl of his dreams just as his grandfather urged him to. Ironically, if Bell wasn't so clueless he'd find no shortage of girls outside of the dungeon that he could pick up, not least his own Familia head - the goddess Hestia, who has (to put it mildly) taken quite the shine to the enthusiastic but clumsy young Bell.

As is so often the way with these stories, there is more to Bell than meets the eye, and as his dungeon-bound quests escalate and progress, so signs begin to point towards his powers being decidedly more remarkable than the lad himself, and this figure of fun quickly grows towards being a notable adventurer in his own right.

If I'm honest, it's difficult to know what to focus on within this series, and it's a question that the show itself doesn't seem to have a particular answer to either. I was initially fascinated by the idea of gods making themselves earthbound to hang out with humans - I wanted to know why, and drill into the stories of the characters in question - yet the series itself has nothing to say about this and just shrugs it off as a normal occurrence. Similarly, I was hungry to dig into the world of Is It Wrong to Try to Pick Up Girls in a Dungeon - to see how it functions and why. Yet again I came up with nothing however - the dungeon is just there, and why it's a valuable career path for anyone to traverse it seems entirely unclear. When compared and contrasted to other stories, be it Grimgar, Log Horizon or even comedy hit Konosuba, this simply isn't up to par and ultimately there's no reason for me to be invested in this world when it seems to exist simply as a canvas for its characters rather than a living, breathing entity in its own right.

At least those characters are a little more likeable - Bell is a pretty typical anime protagonist but works well enough as a lead, while Hestia is a far more engaging character than just the blue piece of string that has come to define her character and gave birth to a slew of fan art. In fact, the relationship between Hestia and Bell is the clear highlight of this series - in the midst of the unlikely harem that builds up around Bell, Hestia's doting love for her charge has a real tangible sense of love and caring devotion to it, and it's hard not to join Hestia in cheering Bell on as a result. The rest of the cast that orbits this pair are decent enough, but rarely manage to break beyond the stereotypical constructs which define them.

The story that swirls around these characters never really surprises - as we mentioned, there's more to Bell than first impressions suggest, but even this is hinted at right from the very first episode, and his adventures from this point forth at all pretty rote fare and exactly what you'd expect from this kind of series. Sure, the show looks good and has some great stand-out action scenes as well as some strong character moments, but I could never find it in myself to particularly care about what was going on and why. Even when the show's story does introduce what could be a juicy narrative arc to delve into, it all unfolds in a predictable fashion which ultimately allows it to fizzle out.

The more I think about it, the more the major issue with Is It Wrong to Try to Pick Up Girls in a Dungeon rears its head - this feels like a story in a very literal sense, and one that has been very deliberately written to achieve very particular things. This is in stark contrast to most successful anime - sure, it can be self-aware, but ultimately it sets out to build a world that stands on its own as a three-dimensional space which its characters inhabit, whereas the world provided here never feels like anything more than a cardboard cut-out. Without the suspension of disbelief that any good story requires of you, it becomes very hard to engage with the narrative itself, and the whole illusion shatters in short order.

In terms of the presentation of this UK release, we have no complaints - the show boasts a solid English dub which brings across its cast as well as you'd hope, subtitles are good throughout, and the series looks the part on Blu-ray especially when things get busy and the value of its HD presentation become far more apparent. Its UK Collector's Edition may be low-key, but it certainly gets the job done in terms of its on-disc content (and we can't comment on the broader package as we're yet to see it at the time of writing).

While there's no doubt that Is It Wrong to Try to Pick Up Girls in a Dungeon has managed to secure a substantial fan base in both Japan and the west, it's hard to find anything that allows it to stand out in a crowded market that has no shortage of better realised and more engaging stories than you'll find here. If a likeable cast and some decent action is enough for you then there's certainly some fun to be had from watching this series, but peer beyond that surface layer and there's little more than a shell of a story underneath.

5
This series boasts an enjoyable cast and appealing presentation, but look beyond these elements and there's little to see here.
LATEST REVIEWS