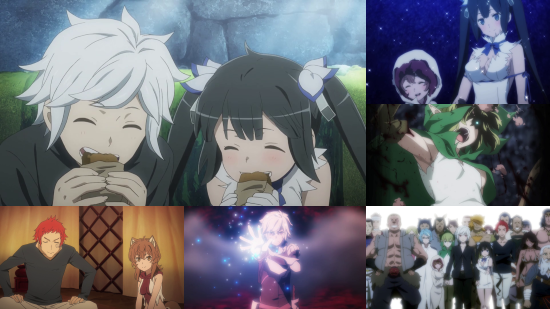 Over the course of this season I have learned a few highly valuable life lessons thanks to Is It Wrong to Try to Pick Up Girls in a Dungeon:

Is It Wrong to Try to Pick Up Girls in a Dungeon has been one of those series that I expected to be filled with parody and fluff but little actual substance, although the first four episodes introduced the world and lead me to actually feel something for the terminal underdog, Bell. The kid was improving and I had to hand it to him, he had some serious guts and some skill. He clearly had an ace up his sleeve and, of course, the undying support of his goddess and familia (however small it was).

Then the series decided to get a bit more serious. It was obvious from the moment they met that Bell was going to have some issue with his supporter; from the moment she tried to steal his beloved Hephaestus knife and steal his gear and gold, it was clear that she was going to be trouble. But Bell, being the sympathetic and heroic type, forgave her and this led to further troubles when her former familia, who she owed all of the money to, trapped Bell in the dungeon and tried to get him killed. That wasn’t very nice. But through this, Bell finally came into his own and his secret ability, unbeknownst to him all this time, became obvious - he was an Argonaut; a Hero. And what do heroes not do? Lose. Hell, when your abilities grow so quickly that they literally appear in a flash of fire, and when your special move is to deliver a killing blow, you do have to question whether Bell is actually an underdog anymore. The “Little Rookie” can do no wrong it seems.

Perhaps I shouldn’t be so hard on him. When Bell has people going up against him he manages, with the help of his newly formed party of the blonde bombshell Sword Princess and the goddess of the tit ribbons, there is actually no way he could lose.

As for his aim of picking up girls... well, the little bugger is actually highly successful. Considering I originally thought this anime might keep the harem side a bit more subdued, the swine managed to get himself a lot of female (and some male) love interests. Okay, so in true anime fashion, he has absolutely no idea what to do with any of them - even when he is getting heavenly-born breasts pressed against his face all he can do is look embarrassed rather than embracing his situation like a true... “Hero”. However, for the viewer, this does mean that there is plenty of eye candy to appreciate. We could play the time honoured game of “Who is the best girl?” but I think doing so would probably just start a fight between those who lust after the elven maid turned warrior Ryu, the sword princess Aiz, and the busty lolita Hesita. I was hoping for more of that lovely catgirl maid in this series, but alas it wasn’t meant to be.

What did irritate me a little as the series progressed was the pacing. Is It Wrong to Try to Pick Up Girls in a Dungeon is a single cour series, meaning thirteen episodes is all we get, yet the writers introduced all kinds of stories in the background to threaten Bell. They wasted a lot of time on scenes which seem drawn out (the colossus in the final few episodes), and then there is the whole matter of Zeus and the other interfering gods, with no progression within those elements of the story at all before the end of the final episode.

After all this potential we are stuck with just thirteen episodes, and no more at the time of writing. I was also a bit disappointed in the lack of the development of Hestia and some of the other secondary characters. I had expected them to be more fleshed out. All this aside, I shall continue to live in hope that we get more Danmachi and that Hestia finally gets herself a decent brassiere, as having those melons dangle like that can’t be good for her back.

Overall though, this series has been a surprise for me this season. I had expected it to be either a big disappointment, or just another comedy harem series. It isn’t. I have been touched by the characters and I am left with a bit of of sadness that the series didn’t continue. Roll on a second series.

My predictions should the series continue however: Bell turns out to be Hercules. I can almost hear the Disney TV series theme tune in my head… “Zero to hero…”

You can currently watch Is It Wrong to Try to Pick Up Girls in a Dungeon in streaming form on Crunchyroll.

7
The series gets a lot better, but the pacing and story are issues.