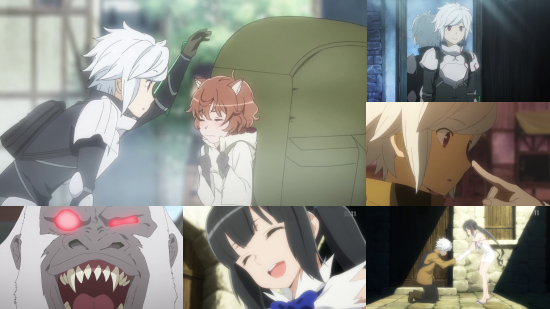 And the winner for longest name for an anime goes to...

To save time, effort and sanity, DanMachi is the shortened version of the show's Japanese title which seems to be going around the community. Also, and this amuses me greatly as I have seen it a few times now - and not just on our forum (you know who you are!) - it's been suggested that the title is “Is It Wrong to Try to Pick Up Catgirls in a Dungeon?”.

The answer to this question is of course no, it’s never wrong.

If the name wasn’t obvious enough, DanMachi at first glance seems like your run-of-the-mill fantasy/comedy harem show and in a lot of ways it is. Bell, our male protagonist, starts off as a newbie dropped into a dungeon way above his ability. A minotaur threatens to dice him and slice him into little boy pieces, until he is saved by a gorgeous and skilful blonde lass with a just as beautiful a sword. It's love at first sight. But it’s not as if Bell is alone on his adventures. In the world of DanMachi, the ancient gods and goddesses exist, and due to boredom, they have chosen to come down to our plane of existence to live life through different eyes. Obviously, they are no longer omnipotent, but they do have some ability, namely to give blessings and to provide the power to “level up” the adventurers as they battle and gather resources for their gods and the gods’ familia (think guilds in an MMORPG).

As is to be expected from an underdog character, Bell isn’t exactly in an elite familia. Quite the opposite in fact - he is a member of the Hestia familia, consisting of himself and the goddess Hestia, who blesses and gifts the familia with her presence. As Bell is still very new in terms of his level and ability, the level of creatures that he can harvest and make money from doesn’t exactly supply a lot of wealth for the familia. Add to this the fact that Hestia doesn’t seem to have any form of innate power or skills to capitalise on (which I find interesting, considering she is the goddess of family, the state and architecture), the only assets which Bell and Hestia can really rely on is Bell’s unwavering focus on getting stronger; oh, and let’s not forget the blue ribbons which support Hestia’s bosom. Boing...

Bell is also completely oblivious to much of what's going on around him, but that is pretty much standard for a harem anime. What is also pretty bog-standard is that he has a crush on a gorgeous and powerful blonde, Aiz, the one who rescued him, but cannot see that actually Hestia, and as the series progresses more of the girls around him, fancy him. Ah bless. Instead he continues being nice to everyone, while ignoring specific advances and gathering more adoring female fans from all walks of life.

DanMachi isn’t all about Bell’s ineptitude though, and I actually find the goddesses to be a little bit more interesting. Freya and Loki are themselves a very interesting little pair - obviously both are up to no good, which suits their role in Norse mythology, and in true fashion for this series, they have been gender-swapped just to provide the series with its quotient of mature-looking women. What I really find engrossing is the Hestia and Hephestus combination. In Greek mythology, Hephestus is the god of the forge, and in a world full of beasts and adventurers, having a bloody good sword and armour makes the adventurer. Needless to say, Hephestus’ familia is one of the biggest and wealthiest, and yet she has a soft spot for Hestia, not only making a magnificent weapon for Hestia to give to Bell (although obviously not for free), but also defending her. It’s rather, cute. It also helps that Hephestus is quite stunning, and excellent with a hammer.

I suppose it was fate that after watching four episodes, I have found myself talking about nothing but the girls. Yes, they are universally pretty, and one of the draws of this series this season is the quite imaginative character design. It’s no secret that I tend to be a fan of most fantasy series, generally due to their liberal use of girls with cat ears to punctuate the story and dialogue, and DanMachi delivers... well, everything except for a story.

The plot is razor thin - you can see something building in the background, but there isn’t really much to get absorbed into except for the cute and catty girls. This is the reason why I have found it so difficult to write this review - I am torn. I have loved every minute of DanMachi. I have laughed and there have been times when I have had to question what my brain tells me. Just because I have enjoyed it doesn’t make it good. Beyond the cute girls there isn’t much left, but it is a harem anime afterall. Perhaps this will change and I really hope it will. Freya and Loki are up to something but let’s hope this proves to have some substance.

You can currently watch Is It Wrong to Try to Pick Up Girls in a Dungeon in streaming form on Crunchyroll.