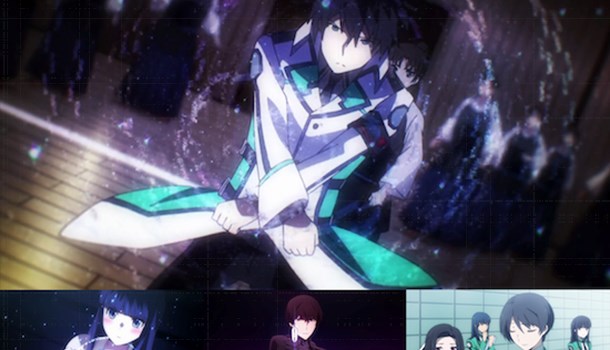 Science and magic are two things that have often gone head to head in the world of anime, but are rarely combined in a manner that properly utilises the strengths of both. But, in the world of The Irregular at Magic High School, the two have been used in tandem for nearly a century - with mages casting spells via a Casting Assisting Device (or CAD) rather than via the traditional magical methods. Injecting their CAD with psions, the machine is able to rapidly produce a complex formula to unleash the magic. Who needs a wand when you can summon a lightning bolt or shards of ice with the flick of a switch?

In the year 2095, Tatsuya Shiba and his sister Miyuki enroll as first years at the Private Magic University Affiliated High School (mostly shortened to just “First High School”). At schools such as this, those that score well on their entry tests are enrolled in the Course One curriculum while those with poorer scores go on to do Course Two. Magical ability has led to a rather harsh divide among  the students, with the two classes nicknamed “Blooms” and “Weeds” by Course One students.

While Tatsuya scored the highest in the written/theory part of the exams, his low practical test scores lead him to being placed on Course 2. But despite initial ridiculing from his Course One peers, it isn’t long before Tatsuya proves himself to be more skilled at magic than most of them could dream of. As both he and his new friends at First High become entangled in conspiracies that go far beyond simply high school life, Tatsuya’s dark past begins to emerge as the full extent of his powers are revealed.

When an anime adaptation of a light novel or manga series is announced, what usually follows is crushing disappointment when the source material is poorly condensed to fit a one or two cour slot. Unfortunately The Irregular at Magic High School is not only one of the many victims of this, but it’s been made in such a way that some things feel almost impossible to follow properly. The show opens with an extremely important event that shapes the Shiba siblings, but this is glossed over in five to ten minutes and the viewer is then left to fill in the blanks as the show goes along. The 26 episodes are then broken up into three 7-11 episode arcs, which all take the format of “relatively normal school thing becomes an extremely dangerous conspiracy”. The show plays silly ideas like the mafia targeting an inter-school magic tournament completely straight, dumping an impossible amount of information on the viewer every episode. Events, place names, people, magical terminology - these are just some of the things that will fly past you with little to no explanation whatsoever. It’s a huge shame because the idea of a world where magic is practically a science is one that’s rife with good story potential. Whether the light novels are able to tell things any better is another matter, but judging by the show alone the cuts that have been made to fit the episode count couldn’t be any clearer.

The worst thing is that this feels like a minor complaint compared to the horrible mishandling of the show’s lead character. When we’re first introduced to Tatsuya Shiba, it feels like The Irregular at Magic High School is going to be a real underdog story. Despite his aptitude for magical theory he’s been enrolled into Course Two, leading to more than a few run-ins with Course One students with obvious superiority complexes. But, in less than a handful of episodes, its evidently clear that Tatsuya isn’t really lacking in anything at all, as he repeatedly bests every single character he faces in the entire series - from classmates and rival schools to trained soldiers and terrorists. He’s super smart, a loving brother, a considerate friend, a trained killer and can actually utilise some of the most powerful magic in existence. So much for being an underdog then.

Usually, overpowered protagonists such as this come with some sort of Achilles Heel (such as overconfidence or a god complex) but Tatsuya is completely flawless. There’s no arrogance, no short-temper, no anything. The character is a fixed point, receiving absolutely no development other than having him pull out a new god-like ability when the story dictates it. It’s (poorly) established that for some reason Tatsuya’s only remaining emotion is his love for his sister, which mostly just presents itself as awkward fan service. Admittedly most of that blame should be placed on Miyuki rather than Tatsuya, with her love going far beyond the boundaries of what should be considered normal.

Of course being set in a school there’s also a whole host of other (and often far more interesting) characters, but they are all sidelined to further amplify just how perfect Tatsuya is. It’s only in the very last arc do we begin to see the other students of First High manage to step out of his overwhelming presence, but at that point it really feels all too futile.

The animation is not of particularly bad quality, but for a production by a big name such as Madhouse is certainly comes off as rather underwhelming. Little visual cues as to what magic each student specialises in (such as a snowflake hair clip) are a nice touch, but other than that the character designs border on the generic. The spell activation and casting do offer a little bit of wonder, but again is nothing that hasn’t already been bested elsewhere. For a show that has such a unique outlook on magic it’s a pity that a better way of visualising it couldn't have been thought of.

The Irregular at Magic High School is not just proof that one good idea does not instantly make a good show, but also the perfect example of how not to write a likeable and/or relatable main character. If the Shiba siblings weren’t around this would have been a very different show, but I sincerely doubt it could have been any worse.

You can currently watch The Irregular at Magic High School in streaming form on Netflix.

3
An interesting premise severely let down by an insufferable protagonist and failure to properly capitalise on any of its good ideas.