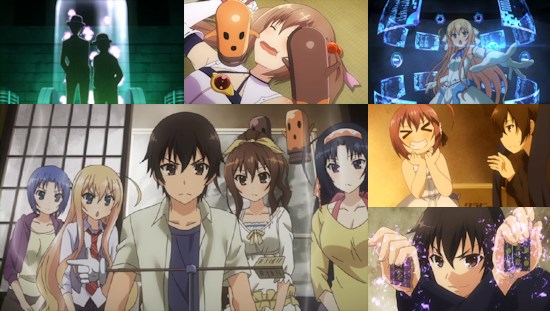 Whether you've been struggling with it yourself or simply reading the news headlines, you'll know that the dearth of affordable housing is a nightmare for anyone not already on that particular ladder. With that in mind, you can hardly blame the protagonist of Invaders of the Rokujyoma, Koutarou Satomi, from being desperate to keep hold of the cheap 5,000 Yen a month rent apartment he's gotten his hands on at any cost. Indeed, even when this young man finds himself assailed by a ghost, a magical girl, an alien and a subterranean ruler hell-bent on conquest, nothing is going to get him to part with his precious new property.

After an initial skirmish is stopped out of fear of obliterating the apartment they're all squabbling over (not to mention the fear of a rabid landlady who is somehow more terrifying than all of them put together), the lines are drawn in the form of a game wherein the floor space of the six tatami mat room can be one or lost until a final victor is declared. To start with, this simply takes the form of nightly card games, but when this becomes boring for the residents it's extended out to various other tasks which arise as the entire group find themselves to be classmates as well as flatmates once the motley crew inevitably become school transfer students in Koutarou's class.

As the group get to know one another and the game for control of the apartment increasingly fades into the distance, so we get to spend some more time with the show's collection of "invaders" - each girl gets her own story arc, which reveals a little more about her and offers some time for her relationship with Koutarou and the rest of the group to develop. As for Koutarou himself, he's more interested in the solitary girl who runs the school's knitting club, although even she perhaps isn't quite all that she first seems.

Although I've seen this series pigeon-holed in a number of places as a harem romantic comedy, to call Invaders of the Rokujyoma as such actually misses the fact that the series is rather more nuanced than that. Yes, all of the girls which surround our protagonist have a soft spot for him, and perhaps even begin to foster a romantic attachment to him, but ultimately friendship is the power that wins the day in this series as its group of rivals all-but settle their differences as they get to know one another and find common enemies to fight against (such as the Blues Brothers, who seem to be amongst the antagonists here!)

There's actually something refreshing about this outlook - I was expecting the series to become all about who'd get to jump Koutarou first in the midsts of increasingly antagonistic cat-fighting, but instead most of the relationships in the series are built around mutual respect for themselves and others. This leaves the show largely bereft of any major drama and arguably even blunts its comedy, but the behaviour of the cast feels more mature than other similar series and the grounded nature of their relationships is appealing and downright pleasant to watch.

All of this is surrounded by a fun wrapping that's unlikely to get too many full-blown laughs out of you but should raise a fair few smiles, while the show's visuals and voice acting are also competent rather than spectacular but do everything required of them and even break out into a couple of truly impressive action scenes that set the show's high bar in terms of its animated accomplishments. There's no English dub here, but the subtitle track for the series is solid and without any major faults that we could spot.

To call Invaders of the Rokujyoma a "nice" series sounds awfully like damning it with faint praise, but I do mean it in a positive sense here - this could have been a series filled with overblown misunderstandings and back-biting, and with its comedy and drama derived from that. In comparison, this show could be seen as taking the high road, letting its characters stand on their own two feet (and watching them learn how to do so at times) and find their own place in the world without clambering over others to do so. Its outlook might leave it bereft of standout moments, but if you find yourself liking its cast of characters (and they are all eminently likeable at their core) then you should find yourself to be sufficiently entertained by Invaders of the Rokujyoma to make it a worthwhile viewing experience.

7
More a tale of friendship than love rivalries, Invaders of the Rokujyoma is a sweet and simple tale that is relatively entertaining to boot.
LATEST REVIEWS