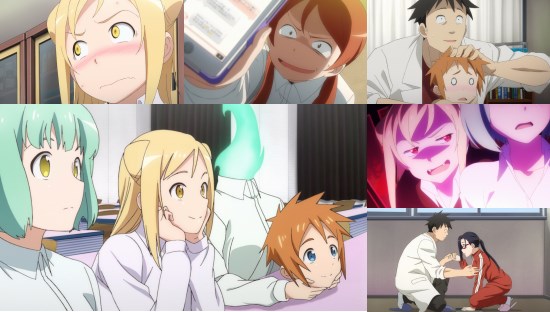 It's probably fair to say that the monster girl phenomenon in manga, and slowly but surely anime, has passed me by. Yes, I sat and watched Monster Musume based on the hype and excitement around it, but I really didn't get it. Or rather, I did get it and can see the appeal, but it wasn't for me.

Since that point, I've largely avoided anything monster girl-related with a dismissive shrug, but that proved impossible when the anime adaptation of Interviews with Monster Girls rolled around - I'd already had its source material recommended to me, and watching people's glee at the debut of this adaptation convinced me that I should dip my toe into these waters again. So, here I am, having watched the first three episodes of this series, and let me drop my voice to a whisper to tell you... I really like it.

Tetsuo Takahashi is a biology teacher who has one desire which overwhelms much of his thoughts - he really wants to meet and talk to a demi-human. This is a world where these blends of human and monster (simply "demi" as they prefer to be known) aren't exactly commonplace but do very much exist in reality as part of the fabric of society. Indeed, the Japanese government has even put legislation into place to help demi-humans transition as seamlessly as possible into everyday life without stress or prejudice, and it seems to have worked as a small triumph of multi-culturalism.

However, for Takahashi simply running into a demi-human seems like an impossible dream - until he meets one amongst his school's teaching staff. Then another... and another... and yet more. Our protagonist has hit the jackpot, and for various reasons all of these "demi" ultimately find themselves willing to talk to him to share their life experiences and a little insight into what makes them unique.

This is normally the point where I roll my eyes at the descriptions of most "monster girl" series, as in most other shows these so-called interviews would start with a question about said monster girl's sexual characteristics while drooling and giggling. Not here however. Sure, sex does gets mentioned, but is usually met with a mortified response by the teacher's student interviewees and is quickly dropped, and any such line of questioning is decidedly innocent in nature. Instead, the discussion focuses more around the relatively mundane aspects of these girl's lifestyles: How does vampire Hikari get through life without sinking her fangs into people? What are the everyday difficulties of a Dullahan? Why does the succubus teacher always get into work so early?

It's the answers to these questions that make Interviews with Monster Girls such a sweet, enjoyable watch, for the answer more often than not involves just doing whatever works to get by. Rather than focusing on how weird and unusual the show's demi-humans are, the real story here is that they aren't all that unusual at all save for the physical traits that outwardly define them but inwardly do nothing of the sort. This allows the relationships between the characters, and all of the girls' relationships with Takahashi, to concentrate on their enjoyable interactions without any of the icky awkwardness that defines other similar shows. In that sense you could call Interviews with Monster Girls a slice of life series with a twist, although that would be unfairly reductive on a show that is thus far full of heart and humanity above and beyond the simple pleasures that come from watching its cast goof around.

This adaptation has also proven successful thus far in fleshing out its source material - while some elements of the manga seem to have been skipped (or are being held back to slot in later), others are fleshed out significantly in decidedly pleasing ways. All too often watching an adaptation of a work can see it slavishly follow the material upon which it is based, but on this occasion there's clearly some real care and thought put into making the anime viewing experience work in its own right, while also offering something for the existing fans to get their teeth into. If it can continue to traverse down this path wisely, things are looking very bright indeed.

From a visual standpoint, the series has somewhat softened the edges of its character designs, but otherwise captures everything that fans will be looking for from this adaptation - lots of great expressions and well-handled moments of comedy, and characters that walk the line between being absolutely human but still somewhat "otherly" perfectly in terms of their looks. The subject matter of the show never really stretches its requirements from an animation standpoint, but what is here is all effective and pleasant to look at in equal measure - as, indeed, is the show's music and voice performances to leave us with a decidedly enjoyable overall experience.

At this point then, if you're looking for a series that digs deep into the world of monster girls - be it a focus on their biology or otherwise - then Interviews with Monster Girls isn't likely to be the series that will scratch that itch. However, if you're interested in the core conceit of characters who are simultaneously very different and very similar to ourselves without that kind of relentless focus on such things, then this series is a heck of a lot of fun. With charming characters, wonderful interactions and a keen sense of humour, this is most certainly one of the winter season's simple pleasures that will keep you coming back for more.

You can watch Interviews with Monster Girls in streaming form on Crunchyroll.

8
Even if other monster girl series have turned you away, the lightness of touch and endearing subject matter of this series is sure to charm you.
LATEST REVIEWS