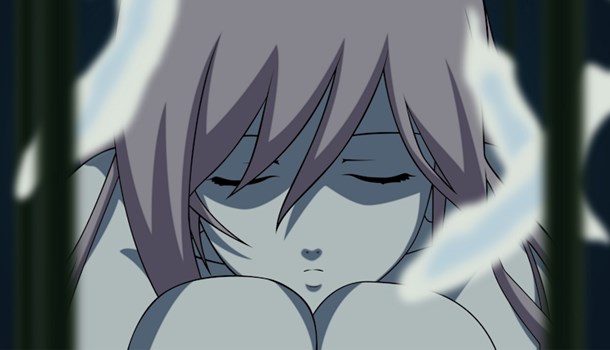 As the heat intensifies on fugitives, as Jin and Jo try to keep young Sana from the clutches of Phantom. But as the 4 episodes play out, there are some rather nasty and surprising revelations along the way, and the disc ends with a very nasty cliff-hanger that genuinely leaves you wanting more.

Sadly, with ADV's release schedules a little lopsided since their repositioning we may have to wait a while longer to see how it ends, but for now lets take a closer look at what's on offer here.

The quartet (that's right, annoying little git Gora is back) find refuge with a group of rebels, but after some rather unfortunate timing, their cover is blown and soon everyone's safety is rather questionable - the body count mounts disturbingly fast, and even though our heroes make it on to relative safety, there's not much left of the rebels by the end of episode 6.

The Pirate's make a welcome return, especially since they're by far the most interesting characters in the series. Political wheels are set in motion, and by the end of episode 8, everything has changed, with both loyalties and lives lost.

Given all the action, you'd expect the series to gain ground on its previous score (8/10) but to be honest, I wasn't really buying into it until the last episode. Gora is a real irritant, moreso in the English dub, and given the loss of life in this volume, coupled with the fact that honourable men die and this cretin is miraculously running about screaming and dodging the reaper is nothing short of infuriating. For the love of God, kill him.

The English dub also suffers from incredibly tinny recording. It comes and goes, but most of the time the cast sound like they're trapped in a small metal box, and it's very distracting.

Finally, right up until the last minute, the main cast aren't interesting enough to keep you rooting for them. The events around them are intriguing, but the lifeless response to what's happening around Jin and Jo makes the series feel flat.

So it's flawed, but arguably it's still watchable. Many of the problems above are solved by the superior Japanese dub, and coupled with that cliff-hanger ending (which I hope they run with rather than make it a ruse) is enough to make me hold out hope for volume 3.

7
Watchable and only a solid supporting cast and edge-of-the-seat cliff hanger save this from a 6.