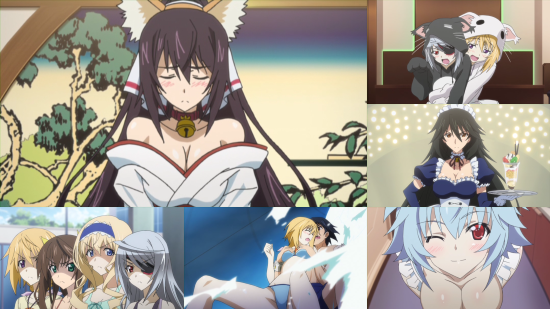 One of my many joys - other than catgirls, foxgirls, monster girls, and let’s be honest, girls - is being able to mix my pleasures. With Infinite Stratos I have the joys of getting my girls, in many ample forms, and mixing them with another joy: good, enjoyable and utterly ludicrous mecha action. It is a formula that many series have tried (my thoughts come back to Muv Luv Alternative at how not to get it right) but a formula whose excellent execution returns a result such as Infinite Stratos.

I will admit that this isn’t my first or even second time watching Infinite Stratos' second season - however whereas the previous times were watched streaming in its original Japanese form, I am not afraid to admit that I am actually a bit of a fan of the English dub. In the first series, to which the second series is a direct continuation, the actors gave a quite hilarious performance, especially when it came to the voices lent to the more foreign of the IS representatives; Charlotte Dunois and Laura Bodewig immediately spring to mind as truly memorable performances, if also the most stereotypical. In some series a comedic performance isn’t necessarily what you are after when it comes to the accurate portrayal of your 2D waifu, but I honestly don’t mind it. Afterall, the same use of stereotypes worked well for Strike Witches and Girls und Panzer, more examples of how the girls plus fighting tech formula makes for truly excellent anime.

So, this accent lusting over (Celine’s posh English accent is still my favourite) it’s time to get down to the meat of Infinite Stratos 2. Actually, maybe that’s the wrong word to use given the subject matter. At the end of series one it was widespread knowledge that the eternal dunce Ichika, although capable, wasn’t actually very good at piloting the IS units. Well, nothing has changed - he is still crap, but at least now the girls of the IS Academy know this and he is finally accepting help from people other than Houki to get better. After getting the attention of the quite perverted but incredibly skilful student body president Tatenashi, Ichika finally learns the basics of strafing and how to actually use a gun, whilst simultaneously adding both Tatenashi and her younger sister to his pseudo-harem. In amongst the usual Infinite Stratos fare of school medicals, where the staff choose the only bloke in the school to administer the measurements, a class trip to the hot spring, and Laura and Charlotte's perverted shopping trip and maid café experience, Infinite Stratos manages to squeeze in the smallest of small portions of story in the form of the “evil” organisation who are stealing IS units the world over, Phantom Task. I wish that name could be applied for all of the items on my never-ending to-do list at work...

Phantom Task is an organisation led by a psychotic lady by the name of Squall and her henchwomen: Autumn, an equally psychotic woman with a fetish for arachnids, and Madoka Orimura, sister of Chifuyu and Ichika, whose motives for hating her siblings are completely unknown and unfortunately unexplored in the series. They attack IS academy repeatedly, trying to steal the IS of the students and generally causing trouble. They find themselves supported by Houki’s sister Tabane later on - again, for some completely unknown reason - and their only actual result, other than irritating Cecilia for stealing her IS, is to make the students at the IS Academy better at piloting.

Now, this is where the formula fails. Infinite Stratos is based on a series of light novels (eight so far I think), and as far as I can tell from the various Wiki and fan forums, the series is not deviating all that much. Your series is only as good as your source material, but once you have used it, it’s hard to get a good plot going. Whilst the light novels may actually explain Madoka’s hatred, the story behind Tatenashi and her sister Kanzashi, and Tabane’s weird dreams of chaos, none of these have been translated into the animation. In other words, besides light character development, some perverse plot devices and a few quite heroic action scenes against Madoka and Autumn, Infinite Stratos 2 is very light on the content.

But then it’s not as if any of us truly watched Infinite Stratos for the story now, is it? I know - as long as the series has cool mecha and cute exciting girls, who cares? Well... I kinda do. I wanted to find more to pull me in on this third viewing of the series, but other than the massively extended first episode on this DVD release, the antics of Laura and Charlotte and Ceclia’s terrifying attempts at cooking, I am finally forced to admit that, like Muv-Luv Alternative, Infinite Stratos doesn’t actually deliver all that much. Yes, the fights are cool and completely mental and I love the characters to bits, but as a story, it sucks. If there had been some actual development behind Phantom Task, I think the series might have been saved, but unfortunately as it is, Infinite Stratos is just a well-acted, pretty but nonsensical mecha series, with a bunch of infinitely good-looking girls who all act stupid for the dunce that is Ichika. And to top it off, Ichika is still completely blind and dumb to what's transpiring around him. Seriously man, grow a pair of testicles, get out of this anime and do something.

English and Japanese stereo audio with English subtitles. Extras consist of an extended first episode with 15 minutes of additional footage, and clean opening and closing animations.

6
Fast pacing, fun girls and furious mecha, but there's no sign of a good story.