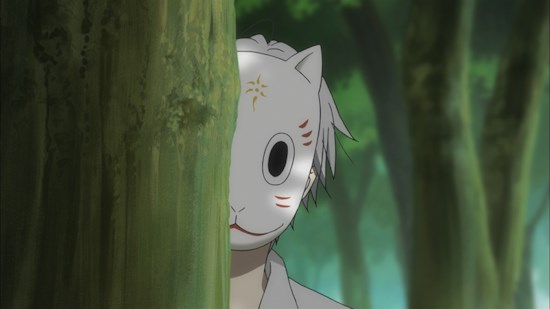 With a successful manga and four seasons of its anime adaptation commissioned, to call Yuki Midorikawa's series Natsume's Book of Friends a success would be an understatement in the extreme.  Given this knowledge, perhaps the only question which springs to mind is "why has it taken so long for some of her other works to be animated?"

In the case of Hotarubi no Mori e, known as In the Forest of the Fireflies Light as its current English title, the answer to the question is simple - although production studio Brain's Base (who also animate Natsume's Book of Friends) have wanted to adapt this work in anime form for some time, the short length of its story seemed prohibitive until it finally got the go-ahead, going on to become a big hit amongst anime fans during screenings in Tokyo as people flocked to see it month after month following its release.

Essentially, In the Forest of the Fireflies Light feels very much like an episode of Natsume's Book of Friends, albeit one shorn of both Natsume himself and the book in his possession.  Instead, we're introduced to a "youkai" or spirit of sorts named Gin, who becomes known to a young, six year-old girl named Hotaru Takegawa when she becomes lost in a forest during her summer vacation with her grandparents one day.  Upon finding this lost, bawling child, Gin helps her to find her way out of the forest, and in return Hotaru returns the next day bearing a thank you gift of ice lollies, bringing with it an on-going friendship that renews itself each and every summer when Hotaru visits her grandparents' home.

There are, however, a couple of catches to this otherwise simply tale.  Firstly, Gin can never be touched by a human, lest he simply disappear and cease to be.  Secondly, while Hotaru grows and develops like any normal human, Gin's age stays relatively static; meaning that as the years go by Hotaru comes closer and closer to the age of her spirit friend.  Couple Hotaru's growth in both body and mind with the close friendship struck up with a spirit boy who has never have a human friend, and there can only ever be one result - romance.  But can a girl really love someone she can never touch, or who never grows old as she will?

In many ways, In the Forest of the Fireflies Light could almost be a Makoto Shinkai film, as ostensibly it's a story about distance - not, in this case, hundreds of miles or even light years, but rather mere feet or inches.  From the intensely funny first minute between a young Hotaru and Gin (where the latter literally has to beat away the former with a stick to stop her touching him), we closely follow the two and watch their love for another grow without that romance ever being explicitly spelled out to us until its final denouement - a love tinged with pain and longing for the physical contact the pair of them can seemingly never have.

For such a simple story with equally simple animation much of the time, there's a quiet, dignified beauty to this short film - it doesn't employ cheap tricks to bring an ache to your heart or a tear in your eye, it simply allows you to see through your own eyes what its two main characters want to the point where you wish for it too.  This feeling grows and amplifies all the way through to the movie's bittersweet ending - a climax which is perhaps a little too sudden and rushed, but one which nonetheless brought an audible gasp from some members of the screening's audience before leaving us shocked; disappointed; unable to really neatly organise our feelings about what we'd just seen as it fades to darkness.

This finale to proceedings really leavers the viewer to make of it what they will - is it really better to have loved and lost, if only for a fleeting moment, rather than continue forever with an unspoken infatuation in your heart?  That's a question well beyond the depth and scope of any review, but it is a great example of the power In the Forest of the Fireflies Light's story exerts, in much the same way that Natsume's Book of Friends has so often achieved.

So intangible is this film from Yuki Midorikawa's best known work that if nothing else it makes for an easy recommendation - if you've ever enjoyed Natsume's Book of Friends, then In the Forest of the Fireflies Light is a must-watch and vice versa.  Given that I don't know anyone who has watched Natsume's Book of Friends and hasn't enjoyed it to some degree, that makes this particular film a highly recommended one indeed.

8
This film is beautiful in its simplicity - a tale of love and the pain of not being able to express that love in a nutshell.
LATEST REVIEWS