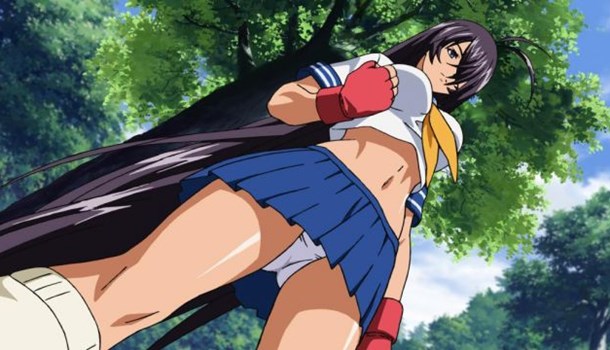 A while back, I happened upon a copy of Battle Vixens, which was released by MVM. I later learned that this series was actually called Ikki Tousen. Later still, thanks to some friends, I discovered the PSP game and courtesy of a cheap second-hand game shop in Akihabara I now have a copy of the most recent game in the series with which to pass the time. I enjoyed Battle Vixens, even with its questionable English dub, and I am enjoying the game, even though I cannot understand a single word of it.

Unfortunately this time around, even though the Ikki Tousen formula hasn’t changed from the first series, I couldn’t help but feel... well, you'll see.

The second season of Ikki Tousen or Battle Vixens (depending on how pedantic you are) is a very loose adaptation of the “Romance of the Three Kingdoms” novel by Luo Guanzhong. Having never actually read the novel, I can only assume that the original material did not involve schoolgirls with an overabundance of chest flesh. Ikki Tousen: Dragon Destiny brings this story into the modern and clichéd world of high school battling, with the wars between the Kyosho Academy, Nanyo Academy and Seito High School heat up as they each vie for dominance in true shogun style.

This second series reprises the characters Hakufu Sonsaku (the reddish haired girl with the bangs and the big boobs who excels at close range martial arts) as the leader of the Nanyo Academy and Shimei Ryomou (the girl who looks like a large breasted Rei Ayanami with an eyepatch and who is almost impossible to kill) as the former Kyosho Academy leader turned artefact hunter. The passage of time and the progression of the battles from the first series has brought forth new characters such as the sociopathic and conquest mad leader of Kyosho Academy, Moutoku Sousou, and the Yomiko Readman clone Gentoku Ryuubi, who despite having zero martial arts skills whatsoever is the leader of Seito High School. Ryuubi is a bit of a strange one as her status is maintained thanks to the unshakable skills of her companions Unchou Kan'u and Ekitoku Chouhi and the strange Koumei Shokatsuryou. Each of these three leaders has within them a dragon, a spirit of a historic general or great leader, with the ability to manifest great power. The objective of these dragon spirits is simple: victory over the others. With the promise of victory comes conflict, which is exactly what Ikki Tousen is best known for.

The tradition of gravity-defying character design and explosive garments is kept fully alive and well in this recent revival of the franchise. If anything, there are actually more panty shots, up-skirts and gratuitous jiggling than there was before. However, as with the first series, the fights are as ludicrous as they were previously, as regardless of the beating both the girls and their clothes take they just don’t ever seem to die.  As a case in point, Shimei Ryomou is stabbed through the chest, walks out of that fight and into bed, and is fine a day later.

The story is unfortunately hard to follow and the myriad of characters, combined with the shortness of the series, means that Dragon Destiny is not the easiest series to pick up even without the sometimes painful over-reliance on naked flesh to maintain viewer interest. When you combine this with the unfortunate dubbing of several of the characters (Ryuubi’s English voice actually causes feedback on my speakers!), it means that merely viewing the series can sometimes be a harrowing experience.

All this aside, Ikki Tousen is indeed a popular franchise (four series and still counting) although it seems to me that similar recent releases from our friends at Manga Entertainment (Master of Martial Hearts, Sekirei and the up and coming Samurai Girls) offer more. It is no secret that when I see a series which meets my, tastes, I dive right in. For each of the reviews of these series I have mentally held the first series of Ikki Tousen as the benchmark to be beaten (the specific elements which each series are assessed against are strictly confidential of course...). However, even though Dragon Destiny is the sequel of that first series, it doesn't meet this benchmark - my fill of melon-sporting, physics-defying anime has been filled by other series since I first laid eyes on Battle Vixens all those years ago, and given that nothing has changed since the first series I don’t think I want to go back.

However, for those stalwart fans (and we know you're out there) Ikki Tousen: Dragon Destiny is the second instalment of a popular franchise offering a different take on the inter-school warring introduced by the first series for those fans who want more of the same, but with new and revisited characters - for these individuals, the complete collection of Dragon Destiny should be on your to-buy list.

As a final footnote, the best bits of this release for me were actually the Red Cliffs OVA episodes in the extras - Even though they are cut a bit (a lot in one case! - Ed.), they are still quite appealing, and well worth viewing in my opinion.

English 2.0 and Japanese 2.0 audio with English subtitles.  Extras are made up of the six Big Battle At Red Cliffs Hot Spring OVA episodes, textless opening & closing credits, a promotional video, TV spots and trailers and a line art gallery.

6
More of the same, but with none of the genre-defining originality of the first series.