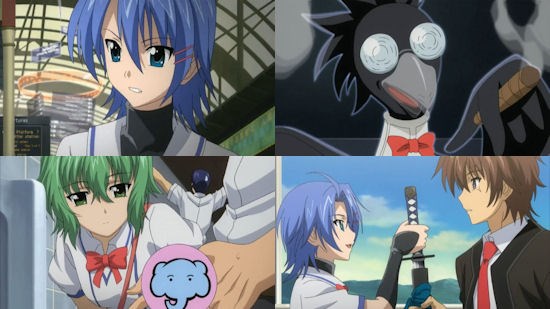 If you've ever mused that there's nothing worse than being sent to a careers advisor only to be told that all of your dreams should be thrown out of the window and abandoned forthwith, then spare a thought for the star of Crunchyroll's new streaming series Ichiban Ushiro no Daimou - A guy who dreams of becoming a high priest of magic so that he can help make the world a better place, only to be told that his only true destiny is to become an evil demon lord.

The protagonist in question, Sai Akuto, heads out to join as a transfer student at the illustrious Constant Academy of Magical Arts to learn his trade, on the way meeting a feisty but seemingly friendly girl named Hattori Junko and forging what proves to be a short-lived initial friendship, as understandably nobody really wants to associate themselves with a future demon lord after this revelation is made to all and sundry by some magical creature which can flawlessly divine future careers.

With so much attention attracted to him, it's inevitable that both disaster and adventure will follow thanks to a mixture of misunderstandings with his fellow students (most notably Junko) and the interest of certain parties who seem to hold more than a passing interest in his powers; abilities which even Akuto himself cannot quite understand or comprehend.

However, if you're imagining some kind of Harry Potter-esque saga from this particular series - Forget it.  Ichiban Ushiro no Daimao's primary focus is on one thing and one thing only, and that is (perhaps predictably) fan service.  It takes very little time at all for skirts to be peeked under and clothes ripped off by magical explosions, while the show also features an android which can only be deactivated by pulling her tail (don't ask me why she has one, I don't know either) and a magical girl who can make herself invisible but has to get naked to do so.  Add to that the fact that a lot of conversations seem to take place in changing rooms, baths and bedrooms and the stage is well and truly set for a feast of female underwear and nudity... except the series as streamed on Crunchyroll is censored.  Badly.  On more than one occasion I feared I'd actually lost the eyesight in one eye, only to realise that a large percentage of the screen had been blacked out to spare my virgin eyes from the horrors beneath; a state of affairs that rather defeats the point of a fan service vehicle in all honesty once you remove the knowledge that it's largely being done to promote sales of the uncensored Blu-Ray releases in Japan.

Thankfully there are at least some glimmers of entertainment to be garnered from this series beyond peeking at female undergarments, and most of these come from that aforementioned android - A girl named Korone who is tasked with following Sai Akuto at all times, which actually allows her to function effectively at times as comic relief, with some great deadpan one-liners that raised a laugh with me on a few occasions during these opening episodes.  Beyond those quotable moments, the series carries a reasonably solid story and predictable yet vaguely interesting characters, which might carry enough interest for some to allow Ichiban Ushiro no Daimao to operate beyond a simple fan service vehicle.

"Might" is the operative word here however, and at the end of the day we have to call a spade a spade and say that Ichiban Ushiro no Daimao is only really going to be of interest to those who fancy watching it for its harem sex comedy qualities, particularly once the censorship has successfully removed almost any sense of titillation from the show's visuals.  It might turn into some magnum opus of the fantasy magic genre, but if that happens I'll happily indulge in the consumption of any available headwear.

At the time of writing, Ichiban Ushiro no Daimao can be viewed in streaming format from Crunchyroll - The first three episodes are currently available to be viewed on the site, with a new episode released every Friday.