I want to Eat Your Pancreas (Home video release) 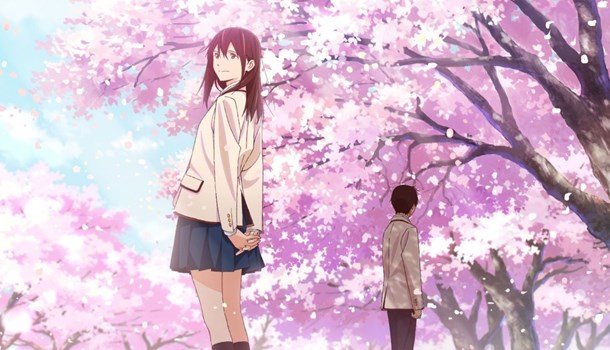 I want to Eat Your Pancreas (Home video release)

In the early days of traditional medicine it was believed that eating a certain body part would help alleviate the problems someone was experiencing with said body part. Such as eating liver would help with live problems or eating stomach would help with stomach pains. I want to Eat your Pancreas deals with the tragic friendship/burgeoning romance between a girl with a Pancreatic illness and a boy who usually keeps to himself.

The film follows two high school aged students with the point of view following the male protagonist, whose name is unknown throughout most of the film. He is a typical shy, reserved loner types who prefers reading books than interacting with people. His reservedness is so advanced that he exclaims that his hobby is imaging what others think of him rather than letting people get to know him. Things change when a chance encounter with a girl in his class leads into finding out her secret. That she has a terminal pancreatic illness. Being the sole person outside her family to know of this leads the way into a rather awkward and unconventional relationship between the two; where they aim to cross off as many things from her bucket list before she passes away.

I want to Eat your Pancreas wastes no time in foreshadowing that the viewer is in for a tragic and dramatic film. The main theme of the film is reaching out to people and living through difficult circumstances. We see this demonstrated in the relationship between the two main characters of the film through their various discussions about how they choose to live their lives. The contrast between the characters and they interact with the world around them helps to highlight the main tragedy of the film as well as provide some comedic moments. The male main character is serious to a fault, cares mainly about reading and doesn't really want to interact with people or let them get to know him. Whilst the girl is open, honest, impulsive. A person that wants to make friends with everyone and live the most of her life. However her having an illness that doesn't give her much time left. This leads to her taking charge in the relationship with the things that they do. We see the female character always energetic, happy and willing to live life to its fullest.

While this leads to rather comedic moments and fun exchanges; there are moments that do highlight the big dramatic point of the film. That the female character is sick and that the male character has been sworn to secrecy about it. This leads the way into some awkward and tense conversations between the male characters and the friends of the female character who are curious why they have suddenly started hanging out with each other. The male character being his typical self really doesn't want to interact with them or explain himself falling back on his habit of letting people think what they want about him. As the film progresses we do see the male character open up more and start to interact with others. Certain events cause major shifts in his thinking and outlook on life. The film has a rather steady pace that feels like a natural progression of two people getting to know each other, with one of the characters trying to break out of their shell. But whilst all this is going on there is the lingering concern about one of the characters health.

The way the characters interact with each other throughout the film feel rather genuine. You get the sense that the characters are confused teenagers trying to life out their lives and make sense of an odd situation. With regards to performances both the Japanese audio and English dub handle things remarkably well. The English dub has great natural performances that work really well in both the comedic and tragic scenes. If there were any criticisms to make about the film it would be the lack of development of the supporting cast. One person is jealous boyfriend who thankfully is barely in it to matter, a guy who is one running joke about gum and the angry confused best friend who wonders why the girl is not spending more time with her. Also the ending or lead up to it feels like it just comes out of nowhere blind siding the viewer for shock value more than anything. Thankfully the scenes that follow this and the way everything resolves redeems the overall story.

Overall; I want to eat your pancreas is a great film for those who enjoy tragic romances. A bitter-sweet film about living with illness and about one chooses to live their life.