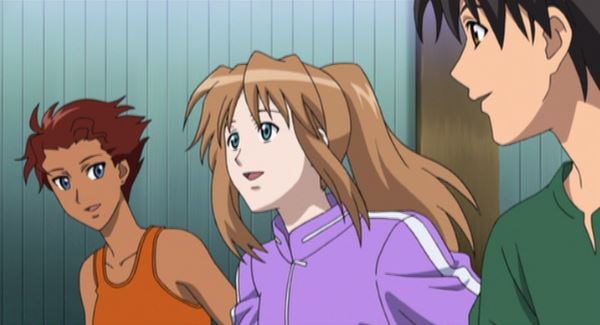 IGPX returns in two new volumes, and it's come on leaps and bounds from the first disc.

Team Satomi continue to climb the leagues, recovering from their recent defeat and coming together to form an unstoppable force in the world of IGPX. But between the hi-octane races and macho team posturing, there's some nicely crafted character-driven moments which helps to flesh out the team members behind the scenes as well as those pushing it to the limit on the track.

Recently news broke that the new Transformers cartoon was to be produced by Cartoon Network, and not in Japan by Gonzo. (I'm going somewhere with this...) My first reaction wasn't to headbutt my monitor (like most TF fans) but instead, I found myself hoping for something on par IGPX - a mix of traditional animation against a CG backdrop. Okay, what we've ended up with is a bizarre cross between Transformers and Teen Titans, but the point is that IGPX had lodged itself suffuciently into my grey matter to be the first thing that came to mind when thinking about American financed cartoons. It really is that good.

Production I.G's production values are very high, and although the static shots really can't do this justice, take my word for it - it's gorgeous on-screen.

On top of the eye-candy, there's a decent script here too. With the shelves heaving with apocalyptic world-shattering epics, it's refreshing to watch something where you care as much (if not more) about what happens to an underdog team as you do about the planet. The cast are all engaging (thanks largely to find performances from a stellar voice cast) and the direction is spot-on, leaving you hankering for more when the cliffhangers arrive.

All of which begs the question: why isn't this selling? According to Beez this is a tough sell, and it really shouldn't be. If you like action, decent animation and a dash of excitement, you really should try this. Trust me - I know a great show when I see it! Forget the "it's not proper anime" movement and treat yourself.

Interviews with the cast, and episodes 2 ad 3 of the original pilot series, which bears almost no relation to the final IGPX worldview. Fascinating stuff ^^
9
Fast, intense and brilliantly constructed.