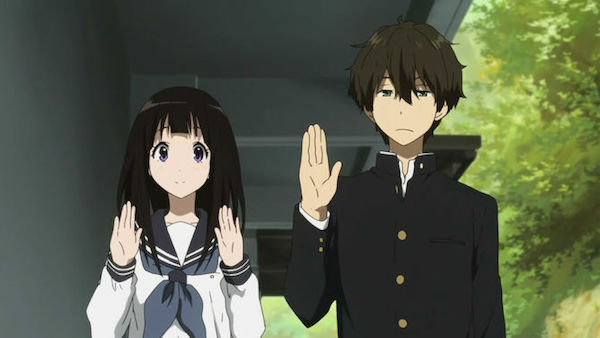 It is not often that I take a blind punt at an anime series. For a series to scream out “buy me!” without any kind of prior research, there are several key things which the series needs to have: it must be pretty, it must be interesting, and it must have good character designs. Hyouka, at first glance, seems to meet all of these requirements…

Houtarou Oreki is a bit of an odd bloke. He seems to be highly apathetic yet very observant and intelligent. He lives his life following a rule of energy conservation, if it doesn’t need to be done, he won’t do it. And everything he does is done in a highly efficient manner, a man after my own heart really. His sister - a highly energetic woman of worldly travels and experience - decides that perhaps his life needs a bit of variety. She pleads with him to join her former club, which is at risk of being disbanded due to a lack of members. Next thing he knows, Houtarou finds himself signed up for the Classic Literature Club.

What Houtarou didn’t realise is that the club is steeped in history. When he first meets the enigmatic and prismatic Eru Chitanda, he finds himself dragged into a mystery surrounding her uncle encompassing 45 years of club history.

To help Houtarou keep the club alive - and solve the mysteries cropping up around the school, and most importantly keep his energy use to an absolute minimum - he enrols his knowledgeable best friend Satoshi and the abrasive librarian Mayaka into the club. Together, they create an unstoppable, anthology writing, mystery solving team! Kind of.

The Classic Literature Club are not really a Scooby Gang, and there is no mystery machine in sight. They do have their super powers though. Houtarou has the power of insight and deduction. Mayaka is super intelligent as well as being small and bitey. Satoshi is a walking encyclopaedia and a Sherlockian of the highest calibre. And there is Eru, she is just a sparkle of persuasive joy. Her eyes and curiosity have the power to motivate even the stubborn Houtarou into taking action. I honestly think that her eyes should be looped as an animated gif on mobile phone screens for those, like me, who suffer from a lack of energy and apathy.

Hyouka is a very easy to digest series: the stories aren’t overly dramatic, there isn’t any violence. I would best describe Hyouka as mental chewing gum. It isn’t hard to enjoy, it isn’t mentally taxing yet it’s quite satisfying to watch. It is not necessarily a series that I would self-prescribe as an anti-depressant, but it’s getting there. The film club arc especially put a smile on my face while I was quite low this past week.

Hyouka is one of those series which really benefits from high definition which the bluray delivers. Kyoto Animation (known for The Melancholy of Haruhi Suzumiya, K-On, Beyond the Boundary and, most recently, A Slient Voice) have worked their magic to produce a show which is a true feast for the eyes, in more ways than one. The backgrounds, environments, and set designs are dynamic and varied, with an incredible attention to detail. Then, there are the character designs. I am not quite sure where the inspiration for Eru came from, but her design is simply exquisite. A few moments that caught me: her first curiosity moment where her eyes dig into Houtarou’s soul with her thorns and tentacles, the moment when her curiosity manifests as hundreds of little Eru fairies, and finally Eru and the whisky filled chocolates. All of these moments made me cry as they were cute, funny and beautifully animated.

I can’t really comment on the English dub as I couldn’t bear to listen to it once I got two episodes in on the Japanese dub. I kind of wish that I had stuck to watching in English to begin with, but once I got used to the character’s sounding a certain way, I found that the difference in their enunciation and emotion was too different and it bothered me. It is worth giving it a chance though as the acting is fine, it just wasn’t to my personal taste.
I think that in the end, my curiosity with Hyouka really paid off. I didn’t know what to expect, other than a very pretty series. However, it is safe to say that Hyouka is more than just a beautiful series. It is a high school slice of life series that focusses on small, easily digestible mysteries with some truly lovable characters. It is a series to enjoy with a nice glass of wine in a quiet evening after a stressful day at work. Hyouka is fun, enjoyable, and easy to watch. It’s definitely a series to add to your collection.

Episode 11.5 OVA episode, with both the English dub and the original Japanese track with English subtitles.

In addition the Blu-ray version is presented in a collector's rigid box, with space for Part 2, and a set of six art cards.

8
Hyouka is a beautiful and easy to enjoy slice of life anime.
COMMENT AND DISCUSS
blog comments powered by Disqus