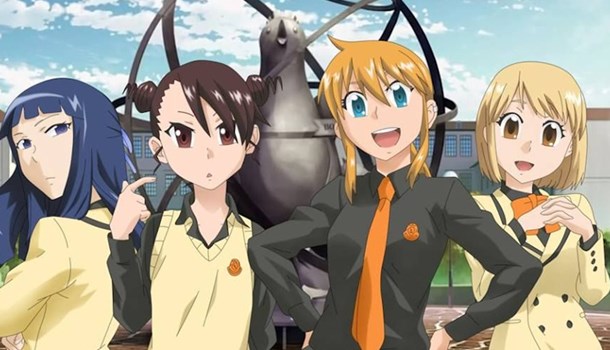 A bunch of high school girls sharing their daily lives and adventures with the viewer is hardly breaking new ground in the field of anime, but it is however a rich furrow for comic anime writers to plough, and a genre that has brought us the likes of the wonderful Azumanga Daioh and Lucky Star.  Indeed, much like the former of those two examples, the subject of today's review began its life in manga form (albeit using the more traditional manga layout rather than the four-panel quick-fire tomfoolery of Azumanga Daioh) before transferring to the small screen in late 2008.  Now, Hyakko is available for UK viewers to enjoy in its entirety on Crunchyroll, so can it make a name for itself alongside some of those slice of life luminaries?

The focus of the series is upon four high school girls - Torako Kageyama, Suzume Saotome, Ayumi Nonomura and Tatsuki Iizuka.  While the quiet and perpetually hungry Suzume and Torako have been friends since middle school, none of the other characters know one another come their first day at high school, but they soon meet and become friends (albeit reluctantly in some cases) courtesy of meeting one another in circumstances which register from the mundane (getting lost in the massive school grounds) to the bizarre (Torako jumping out of a first floor window).

Once these characters are introduced and friendship blossoms, the rest of the series is of course free to allow them to meet various other side characters, who fit neatly into typical slice of life categories from the rebellious girl with an inner heart of gold through to the seemingly scary but actually shy girl who looks more than a little like Sadako from The Ring (a concept in itself blatantly stolen from manga recently turned anime Kimi ni Todoke).

While it has to be said that the character designs employed by this series are great, and all of the main characters themselves are pretty likeable, there is one rather large problem with Hyakko as a whole - It really isn't funny.  At times you can almost feel the episodes straining desperately to pick up something and run with it in the hope of creating something amusing, but aside from rare moments where it hits the mark this almost universally ends in failure - A far cry from the effortless humour of certain other slice of life shows.

Ironically, it's only when Hyakko chooses to jettison its attempts at humour almost entirely for an episode that it actually succeeds in creating something compelling, with its penultimate instalment giving us an insight into the troubled family life of the normally irrepressible Torako.  In comparison to everything that has gone before, this makes for a brilliant story that brings us closer to the girl who arguably holds this entire series together in a genuinely touching manner, with what proves to be an intense yet poignant study of the importance of both family and friendship.  It doesn't really fit in with the rest of the series on any wider scale, but it's almost worthy of recommendation as a single episode of anime in its own right.

Having to pick out only one episode of this series as worthy of your time is actually a rather depressing climax to this review - Hyakko was a show that I genuinely and fiercely wanted to like from beginning to end, but no matter how hard I tried to find reasons to praise it there was nothing of note provided to me in return.  For all its pretty character designs and potential, and in spite of characters who you couldn't help but like all in all, Hyakko ends up being a rather vacuous slice of life series, devoid of either the comedy or the camaraderie that underpins so much of this genre, and on that note I can only really point at Hyakko as a failure in its primary goals.

At the time of writing, Hyakko can be viewed in streaming format from Crunchyroll - The entire series is now available to be viewed on the site by premium members, with 12 episodes available free to all members.

6
Hyakko has so much potential, but ultimately fails to deliver much in the way of laughs.
LATEST REVIEWS