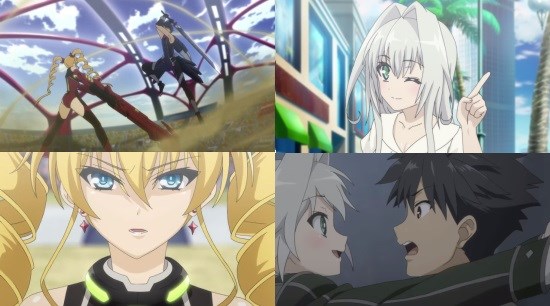 Hundred was one of the shows I was quite looking forward to this season. The promotional materials looked great - the strong female lead in some kind of futuristic armour with her drill hair looked awesome and the show had a decent stand at AnimeJapan this year. Sadly the one thing I didn't do is read the synopsis properly...

See if you can connect the dots along with me here. Hayato Kisaragi is a new student at Little Garden, a school training people to use items called 'hundred' to fight against invading monsters (and also each other). Almost immediately on arrival Hayato finds himself at odds with Claire, the school council president and the school's best fighter, whom he must fight in a duel (erm...) which he wins using his previously unknown yet amazing powers to beat her (riiiight....) by hitting her with his big black magic sword (oh dear). He also encounters his childhood friend and his sister, both of whom are in love with him (sigh) and he has to share a room with one of the girls.

Yes it's Asterisk War/Absolute Duo/whatever version of this show you’ve seen before. As a series the main thing Hundred adds to this is... well, nothing. What it does is highlight just how dull, boring, tired and nonsensical the vast majority of the plot devices these shows use are (and it's not like they were particularly great the first time around). Presumably the target audience of young men is supposed to find Hayato’s super abilities thrilling and his seemingly instant and infallible ability to charm any woman cool, but frankly he's a bland cipher with too little personality to even be unlikable. The action sequences are okay, but Hayato’s special abilities don't really serve any purpose other than to undermine the other characters and the fact that the girls fall for him is baffling especially in light of the other information we're given about them.

Similarly the other aspect of the show that were supposed to latch onto, the heavy fan service element, doesn't really work either as it doesn't go for full nudity and doesn't really understand how to make anything even vaguely titillating. Heck the live action Wakakozake is more of a turn-on and that was mostly glamour shots of food.

On the technical side Hundred does okay and manages to be average in the visual and sound departments, though bar the drill hair of its leading lady the character and creature design doesn't really do anything to stand out and the music is so forgettable you won't be able to hum it within five minutes of hearing it.

Frankly, you get the feeling that this genre has run it’s course and Hundred is the final scraping of the barrel, not even managing the bare minimum of new ideas. Whatever you’re planning on seeing this season don’t watch Hundred. You could watch something interesting with more well written characters instead, or if all else fails you could watch some paint dry.

You can currently watch Hundred in streaming form on Crunchyroll.

2
A hundred times worse than you think it is.