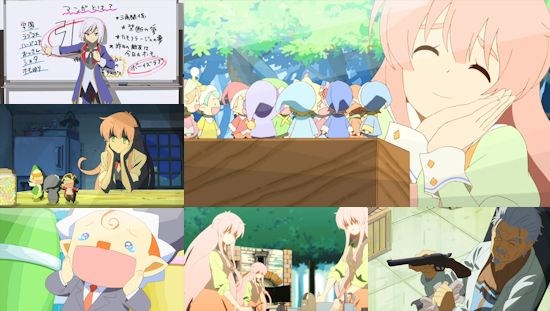 In a summer season that was largely bereft of truly outstanding comedy, the early episodes of Humanity Has Declined really caught our collective eye - it was funny, sassy and so cynical about every aspect of the world it commented on that it makes The Thick Of It look like a sappy and positive series.

As it continues to go about its business, Humanity Has Declined and its nameless female protagonist stick to a strictly arc-based configuration - what's more, its story arcs aren't even in order, happily jumping around all over the place and even going as far as finishing the series with a story that is actually the start of the whole affair chronologically speaking.  Thankfully, the order in which events occur isn't necessarily all that important in the show's grand plan - a plan which is richly laced in social commentary as it tries its best to hold a mirror up to the conventions of the modern world and mankind set against its backdrop of an imagined Earth where humanity has made a sufficiently poor fist of living that it's merely eking out its final days.

However melancholy that all sounds (and at times its relentlessly cynical worldview can threaten to wear you down), there's still a sense of fun that reverberates through the series.  Quite a lot of this comes from the fairies which share this world with the remaining humans - however sinister their fixed grins might seem, watching these little critters vacillate between dejection and hyper-active exuberance as they relentlessly build their own worlds and scenarios to the point where they collapse spectacularly (see what I mean about social commentary on human behaviour?), while at times there are some great moments of straight-forward humour to be enjoyed.  Ever wanted to see a fairy get high on its own supply until it wets itself?  Now you can!

The source of Humanity Has Declined's fun factor is broader than this however, stretching into even some of the core stories of the show itself.  Can you think of any other anime that would build an entire story arc around a couple of dumb plays on words?  I certainly can't, and despite feeling that I should have groaned at the unveiling of such stupid jokes I instead found myself laughing along - not just at the wordplay gags, but also the self-referential humour of having just sat through over forty minutes of anime just so that it could line up those gags.  Some of this humour might not sit well with everybody, and some of its arcs head off in such bizarre directions that they practically lose their way entirely, but it still feels like a brave and admirable effort that we don't get to see all that often.

Visually, the show remains a strange affair - not so much in its overall aesthetic and colour palette, but more in its lighting.  See a torch or candle light up in a dark room in this show, and it'll give off an odd polygonal light source that, well, just looks weird - not in a bad way necessarily, but it takes some getting used to, as do other elements which are clearly more deliberate in feeling a little at odds with the depiction of a waning world.

For all of that praise, we do have to hold our hands up and confess - Humanity Has Declined as a whole doesn't quite live up to the potential of those early episodes.  Given its non-chronological episode order, it's almost as if the source material's strongest works were used to "front-load" the series with the best it could offer, leaving everything that comes after to falter to varying degrees, rather like listening to an album which puts all of its number one hits at the start of the disc.  Still, even though one or two of its story arcs feel a little unsatisfying, and it never hits those dizzy heights of its opening gambit, Humanity Has Declined still occupies a fascinating and unique space that mixes comedy with some real depths hidden beneath its sugar-sweet exterior - it's a series that you could sit and discuss or tear-down to its core concepts with like-minded friends for hours.  It isn't very often that you can say that about anime comedy, and that depth is most welcome to our weary eyes and ears.

7
It never quite matches its early potential, but Humanity Has Declined is both brave and entertaining as it goes about its bizarre yet intriguing business.
LATEST REVIEWS