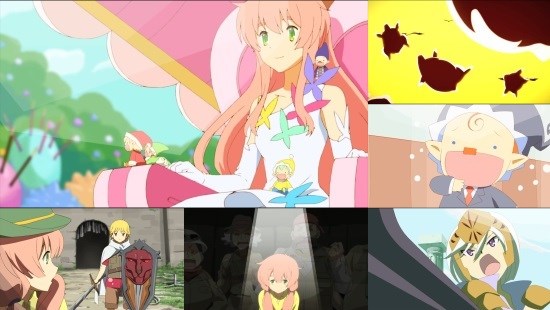 Humanity has Declined takes a post-apocalyptic world where the human population has decreased to a rather small percentage of the current numbers we have now, and where technological advancement has come to a complete standstill. Although with humanity's decline, the birth of a new type of human has transpired - ten inch tall fairies that speak with cute voices while sporting faces with permanent smiles transfixed upon them. However, this appearance is rather misleading as the fairies have not only have access to a new type of magical technology, but also the the intelligence to use it in order to make some rather strange things happen. In order to keep control of this situation the UN have appointed people to act as intermediaries between people and fairies. Enter the heroine, whose name is unknown so is addressed by various monikers the people give her based on the situation. For most purposes it is mainly accepted to refer to her as “watashi”, which we'll be doing for the purpose of the review. Watashi works as a mediator and, due to being one of the few humans that knows how to make sweets, can get the attention of the fairies as they are drawn to sweet tasting food. Thus Watashi gets involved in the strange goings-on caused by the fairies.

At first glance you'd think the series was a whimsical comedy filled with copious amounts of slapstick humour due to the colourful aesthetic and cute character designs. Whilst this may be the case for some aspects of the show as situations get really outlandish and the imagery is fantastical at times, it's not entirely the case. The comedy in the series is far more nuanced than that as it broaches some rather complex themes revolving around society and culture, and many of the story arcs take an aspect of human society and culture and take it far past it's logical extreme. These tend to follow aspects of human society such as popular trends, social hierarchy and even complex theories regarding time paradoxes. The range of themes presented in the series itself is rather fascinating, but tied into this is not only the charming imagery and comedy around it but the whole approach to each situation from Watashi. Whilst Watashi seems unphased by the circumstances she encounters and adapts quickly to each given situation, her inner monologue provides a rather cynical and deadpan outlook on the given situation.

This makes Watashi the perfect character to guide the viewer through the crazy world that has been established. She's a character who goes with the flow, provides a very cynical and clever commentary on proceedings and is smart enough to adapt to the situation and work out what is going on. Her provision of a rather logical approach to events can at times really contrast with what is going on, which somehow makes things funnier. It's refreshing to see a character who in the face of extremely bizarre situations keeps a cool head and thinks things through.

In a similar vein, the fairies also say some rather extreme things with regards that hint at a far greater intelligence than their cute voices and choice of words would suggest. The main point of the comedy which springs from this is how the fairies end up using this intelligence for very trivial things that suddenly pique their interest, mainly to get sweets as a reward due to their inability to actually make any themselves. Whilst the series is set in a post-apocalyptic world it never actually states what actually happened to cause things to reach the point we see before us; instead, the show simply subtly references that human numbers have dwindled and the declining birth rate meant the numbers never went back up. There doesn't seem to be any drama surrounding this or characters dwelling on the past, and instead the focus is firmly on the future and doing whatever is needed to get by.

This ultimately gives Humanity has Declined a really odd tone. Even though it's post-apocalyptic and has some sci-fi elements in a few of its episodes, it feels more akin to a fantasy series. Since the technology used is either remnants of the past or the magically created inventions of the fairies it doesn't feel like it's set in the future at all, which in turn makes it easier for the viewer to relate to what’s going on since the items used don't seem that far-fetched.

What may confuse the viewer however is how the series is structured. With each arc split into stories that last for two episodes each (except for two of them which last a single episode), the story is also shown in a reverse chronological order - the latest things to happen are shown at the beginning of the show. The episode that introduces Watashi into her job role takes place in the tenth episode, with the first set effectively in the show's present. Whilst this may seem a bit odd to the viewer at first, the series does a good job with its explanations in order to enjoy the series in this episodic way. This also allows for also be another way to watch the series on a second viewing to see the order of events in a chronological sense. Also included on this set is an OVA episode, split into six small parts which takes place during the events of episode ten. It is a slightly different take on the show - cuter for sure, but focusing on Darwinism and animals rather than humans. It's a rather humorous episode that makes quite a nice refresher after finishing the main series.

Humanity has Declined is a rather thought-provoking comedy with pleasant visuals set in a crazy world narrated by a rather cynical and deadpan character who is able to take things at face value and go with the flow. This blend of themes and comedy styles works surprisingly well, to craft a series that is away with the fairies but still sufficiently grounded to provide a humorous and engaging comedy that will leave the viewer thinking for quite a while.

8
A charming and thought-provoking comedy.