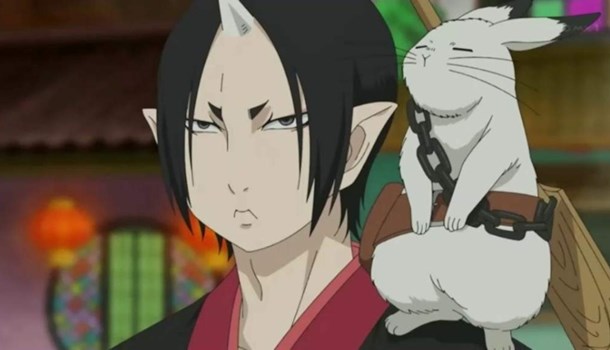 As someone raised in the western world - you know, the part of the world where most religions are based around the children of Abraham and with a strong footing in and around the Middle East - you'll be aware that those who believe in Christianity understand that there is a place called Hell. It is a place full of fire, brimstone, demons and eternal torment. You are poked, prodded and violated by horned people, some with parts of a goat's anatomy, to pay for your sins in life. There are a couple of slightly different flavours of torment, but for the most part you are thrown into the pit and left to rot while the demon lord Satan laughs at you and whatnot. There are the multitude of levels to Hell as described in Dante’s Inferno, but they are all much the same. Fire, more fire, a bit of brimstone and a poker now and again.

The eastern concept of Hell however is somewhat different, as the opening song to Hozuki no Reitetsu will inform you. This particular Hell has many different sections, 272 to be exact, catering to a wide range of sinners. If you are a soul who has been cruel to animals, your hell will involve internal torment and devourment by pets. If you are a panty thief who delights themselves in the removal of used panties, then your hell will involve wearing 99 year-old used underwear worn by the smelliest of demons. The punishments get more elaborate the more perverse the sin committed. Other torments include being boiled alive in the great cauldron, being sung to by the screams of the goldfish flower and being locked up in an Iron Maiden. The eastern Hell is run like a business, ruled in name by the lazy if insightful King Yama and managed by the ruthlessly dry and intelligent demon Lord Hozuki.

Hozuki is, to put it bluntly, a role model for would be middle managers. As the Demon Lord it is his responsibility to ensure that each department balances their books correctly, are properly resourced and that equipment is being fully utilised. He is there to manage the needs of his personnel while delivering a truly horrible experience to those sinners damned to his particular brand of hell. Hozuki, is quite literally, the manager from Hell.

So what actually is Hozuki no Reitetsu about? Well, it is a slice of life comedy anime about the running of Hell. Based on a manga of the same name, each episode is split into two halves, each telling a different story while revealing a little bit more about how this Japanese Hell operates - the woes of dealing with an incompetent leader; managing visiting dignitaries; Oceanian animal life and how to lose bets with Chinese mystical animals on "how big are the tits of the next person to come out of the changing room" (a bet which almost ends in murder due to the androgynous nature of the subject matter). There isn’t really any plot to speak of, and the strength of the series merely lies on the peculiarity of the individual situations and its dialogue.

I suppose if I was to compare the series to any other, it would be a hellish Polar Bear Café, with the penguin angst replaced by the eternal screams of sinners. The format is identical, the humour on both is dry, sarcastic and hilarious, and the stories are so weird at times (demon pants for example) that I found it impossible not to smile. This is especially true when Hozuki met with the spiritual partners of one “Peach boy” and then decided to lay into a small shiba puppy with a slew of insults. Although only a short scene, I found myself in stitches - harsh words indeed, but deserved.

Hozuki no Reitetsu is one of those series this season which I believe will slip under the radar a bit as it doesn't contain breasts, godrobes, nekomimi, bigger breasts or magic, but for its situational comedy, the quality of its writing and its deadpan acting I personally think that Hozuki no Reitetsu is up there with one of the better shows this winter season. How well it fares after a full complement of episodes, we shall see.

You can currently watch Hozuki no Reitetsu in streaming form via Crunchyroll.

7
Hozuki is my new management role model, and he should be yours too!