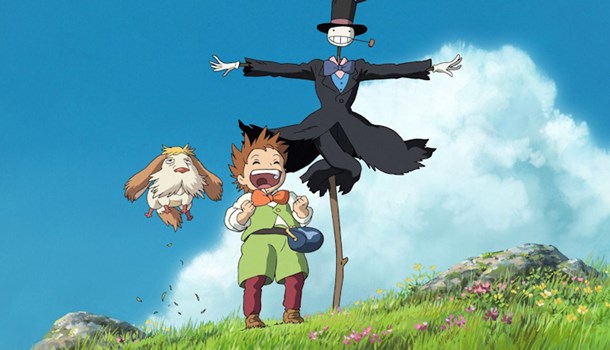 Spirited Away has really paved the way for anime in the British cinema. With the public reputation that Hayao Miyazaki has gained, Howl's Moving Castle picks up the baton from it's predecessor in the push for awareness and acceptance of anime and animation as a story telling medium, not just another kids' cartoon.

Sophie is a young woman working as a hat maker in a little town. The country is at war and while Sophie is being hit on by a couple of over enthusiastic soldiers, Howl the wizard appears out of nowhere. He thanks the soldiers for finding her, then, using his magic, he comically marches them off with a wave of his finger. Here our adventure begins and Howl must escape from his monstrous pursuers.

The art is clean, bright and friendly. Even the bad guys have a softened appearance, without the stereotypical jagged edges. The blob men are reminiscent of the demons from Princess Mononoke, with globules of black goo bubbling, flailing and pouring around street corners and through cracks in doors and buildings.
Whilst maintaining the soft style of Spirited Away and Princes Mononoke, there is a strong sense of urgency and fear that forces you to the front of your seat. The fact that they begin as man-like shapes gives them a deeper eeriness, especially when the regular townsfolk are blissfully unaware of the monsters walking among them.

Once Howl escapes from his pursuers, the Wicked Witch of the Waste places a curse upon Sophie, transforming her into an old woman. In spite of the rumours of Howl taking the hearts of young girls, Sophie makes her way up into the hills where Howl's castle is rumoured to be in search of a cure. She lets herself in and persuades Markl (presumably Howl's young apprentice) and Howl to let her stay as a cleaner.
Oddly, Sophie never inquires about a cure to the spell cast upon her.

The story is shown from Sophie's viewpoint and Howl doesn't make quite as many appearances as might be expected, although when he breezes in (literally) the focus is entirely upon him. Those new to anime could easily mistake Howl for a girl, although I doubt that they would be put off by his feminine appearance. Howl is very charismatic, even when he's having a tantrum about his hair, or is in one of his more monstrous forms. His voice dispels any notion of being female of course.

There are plenty of laughs and small chuckles to lighten the tension, from Sophie's embarrassment when Howl loses the towel from around his waist, or when she has to carry an overweight dog up countless steps. It's good to see that even a sensible anime can stop and not take itself quite so seriously.

The musical score is reminiscent of the Monkey Island games, which isn't necessarily a bad thing. It's a soft summery sound with an oriental tinge that mingles with the narrative and the visuals flawlessly. It's not the kind of soundtrack that people would rush out and buy, but it serves its purpose and that is to engross the audience in this romantic world. Not once does it feel out of place, nor distract from the action. It enhances the entire movie. You want Sophie to save Howl and for their world to be a happy one. The musical score makes this happen and pulls at your emotional strings.

The movie is bursting with views of sunny towns, hilly landscapes, sunsets and sky; all lovingly painted in traditional watercolour. A number of scenes show how art has surpassed reality by creating something that live action could never depict. The detail and colour totally engrosses. You could view Howl's Moving Castle a dozen times and still be picking out little details.

The moving castle is very impressive and well animated in stop-motion style. It works very well in some scenes and looked awful in others. At one point I expected the Monty Python foot to squash it with a big "Blrrp" sound.

The plot was tied up very quickly at the end and felt a little short-changed as a result, but the overall impression left by the experience is largely refreshing and enjoyable.

This is a film the whole family can enjoy, subsequently I'd recommend it with very few reservations.

8
Good, wholesome viewing for all ages. Nicely animated, with loveable characters and beautifully told. There is nothing new to see here, but when this movie is so enjoyable, does it really matter?
LATEST REVIEWS