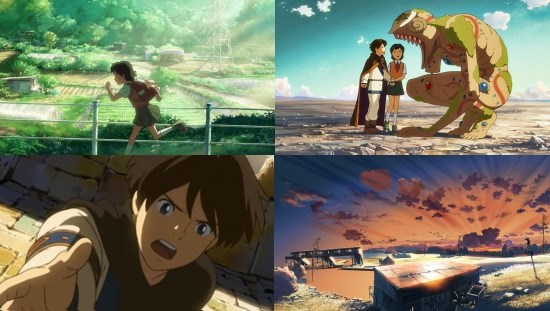 During my recent trip to Otakon 2011 I had the opportunity to see Hoshi o Ou Kodomo, the newest effort from rising director Makoto Shinkai. I am no stranger to his work, having previously reviewed the UK DVD of his previous film 5cm per Second for this very site. As such I jumped at the chance to see his new work (and on the big screen!) and present my thoughts here.

The film centres around Asuna, a curious and independent young girl who will feel instantly familiar if you are acquainted with any of the female protagonists in Studio Ghibli works. Asuna spends her time relaxing on a hillside with a crystal radio her late father left behind, listening to beautiful yet mysterious melodies with no identifiable source. One day she meets a strangely-dressed young lad, Shun, at her favorite spot on the hill and this meeting starts a chain reaction of events that will take her on a long, arduous journey to the forgotten underground land of Agharta. I will divulge no more plot details here as it would be cruel to spoil the film, but suffice to say that an awful lot happens to Asuna and those she meets on her journey.

With some caveats that I will get into later, the central plot of the film works well, taking you on a complete journey from beginning to an end where things are tied up just enough to leave you with something to think about when the credits roll. All of the characters presented are complex, multi-faceted people who visibly struggle with their own motivations and emotions throughout the course of the film, making them a lot more compelling to not just watch but also to understand and empathise with. Shinkai's previous films have previously been very good at tugging the old heartstrings, and in that regard I feel this new effort is a step above those works. I came away from the film with a real sense of catharsis, feeling enriched from having accompanied the characters trough their personal arcs and the whole journey that unfolds over the course of the film. I may even have shed a tear or two, but that’s to the be expected as I’m a massive wuss.
Hoshi o Ou Kodomo (as I will call it from here on out to save having to type the full title each and every time) is without a doubt Shinkai's most ambitious work to date, clocking in at just over two hours long. It's scope is also much broader than previous works, including many more characters, settings, concepts and interweaving motives and plotlines into its mix. The world Shinkai has conjured is a lot broader too, incorporating many different sources and reference points and managing to seamlessly mix them into a magical and coherent whole. Nostalgia-enriched rural post-war Japan gives way to Tibetan villages and dress while meso-American mythological designs appear in the foreground, all of it in it's proper place and presented with a great degree of flair. The slow unfolding of these elements over the course of the film really help to immerse you into the film and keep you in a warm state of pleasant wonder over the whole of the film's runtime.

With this scope comes some downsides, sadly. While everything ties up nicely at the end, for the majority of the film there are just too many different plot points in the air at any one time. The sheer volume of characters, their differing motivations, interrelations and goals all crowd for space in the film and makes keeping track of everything burdensome. There simply are too many individual things vying for your attention at any one time, although not so many that some are forgotten. The pacing also suffers as a result of this and from poor management of tension within and between scenes. Hoshi o Ou Kodomo contains some surprisingly violent action scenes, a first for Shinkai, and while they are very well presented it is hard to get overly excited about them due to the uneven pacing leading into them and the lack of any real threat present - you can tell from the outset how things are going to pan out. A final complaint to make here is that while Asuna is presented as an independent young girl who is driven in her chase for answers, events in the plot dictate that she ends up as a hanger-on to a series of male characters for the majority of the film. This is only a minor conflict, but is something I became acutely aware of as I grew attached to the main character.
I believe these are the growing pains of Shinkai as a director - with experience he should be able to better edit his works to present a more effortless whole. As it stands, while Hoshi o Ou Kodomo is a fine film, you can still see the seams in the finished product.

If you have watched Shinkai's previous works, you will know that the man has a particular pedigree for beautiful background art in his films, and Hoshi does not disappoint. While it has become almost a running joke among his fans at this point, it is fair to say that the clouds in this movie look absolutely stunning. Every piece of background art looks downright opulent in its beauty, while still taking care not to become twee or outstay its welcome. One particular scene sticks foremost in my mind - a glorious vista at sunset looking out over the town and countryside below Asuna's favorite hill, with clouds hanging lazily in the sky while a flock of birds flits about in the mid-ground, long shadows being cast by their slight forms. It really stirs the heart and drops the jaw. I really can't heap enough praise on the art in this film.

The soundtrack weaves in and out of the visual splendour, giving it additional depth without ever clashing or butting in, making the presentation feel like a single, well considered whole. Another note I feel is important to make about the visual design is how well the characters interacted with the backgrounds. While the characters have much simpler designs they meld perfectly with their environment, solidifying the movie's presentation.

I feel I have spent a lot of this review pointing out flaws in this movie but a lot of the whines are born out of love - a desire to see Shinkai develop as a creator and director. Let me state plainly - I loved Hoshi o Ou Kodomo, and would recommend that anyone reading this take up any opportunity available to see it for themselves. The story is deeply enjoyable, emotionally touching, and the presentation borders on the magical. That being said, it's not perfect, and when issues arise the imperfections poke through very plainly, simply because the bulk of it is so damn good.
Again, go and see this film if the opportunity arises (and it might well do later in the year for UK anime fans! - Ed.). It's something very special and is a good indication that Makoto Shinkai has the scope to continue improving and expanding his range. While I will admit that this is a trite thing to say, I can't wait to see what he does next!

One small thing to bear in mind is that the title for English-speaking territories is not currently final. The title "Children who chase lost voices from deep below" was used as it was the english subtitle for the original Japanese release and is subject to change at a later date.
8
A beautiful, emotionally resonant gem that, while not free of flaws, manages to outshine them and provide an uplifting experience.
LATEST REVIEWS