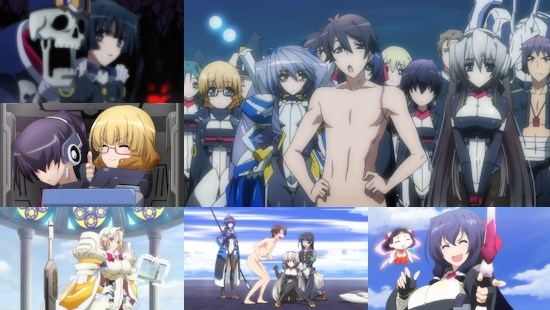 Titular character Horizon may have been saved at the end of the first season, but the mission to recreate human history in its entirety continues while Tori Aoi is faced with a decision on what the now effectively rogue Musashi Ariadust Academy should do next, in particular with regard to whether they should pursue the retrieval of the remaining Armours of Deadly Sins to return Horizon's emotional abilities to her.

As per its first series, this second season of Horizon on the Middle of Nowhere ensures that it begins with some dazzling action as Musashi seeks to make good an escape from Tres España, before turning their attentions to England as their next port of call.

Once there, they arrive to find England preparing to face the Spanish Armada in the midst of recreating an important part of their history - not that this stops them putting up a fight against Musashi in the first instance, allowing us to see what would happen if Shakespeare had the power to defeat an enemy by reciting MacBeth at them, or what Francis Drake would be like if he were a werewolf.

If the first season of Horizon on the Middle of Nowhere was bonkers (and let's be clear here, it was), then this second series is doubly so as it throws a massive cast of characters at you and ensures that they spend every single episode.... just doing... stuff, basically.  This makes for a fast-paced and visually engaging affair from beginning to end, whether it's Tori running around naked for the entire series, lots of moments of pure sex comedy that arrive apropos of nothing, or intense action scenes that encompass various different simultaneous battles filled with crazy powers up to and including deadly baseball players.

The trouble is, being fast and frenetic is great if what you're presenting actually makes any sense, but Horizon on the Middle of Nowhere's second season most certainly doesn't.  Clearly aimed at those with prior knowledge of the light novels (which are anything but light in physical size, incidentally) that comprise its source material, once stripped of that knowledge you're left with character constantly spouting what might as well be random words and phrases that really don't make any sense at you.  While the first series at least had a simple core premise that cut through all of the jargon and chatter to give you something to cheer on and focus upon - that being Tori's efforts to save Horizon, and with it the world - there no single, central premise to this second season to grab your attention and drag you along for a ride.  Instead, trying to parse this series feels like trying to make sense of an automated spam e-mail times - occasionally fun in a weird way, but ultimately frustrating.

Still, at least of all the insanity thrown our way proves to be a visual treat, packed with colour and detail as its every-growing roster of busty characters threatens to burst (with every pun intended).  As a sheer spectacle with your brain switched off, there's something to be said for what the series offers when it puts its foot to the floor in the pursuit of action, assuming you can forget about the fact that you're missing out on a lot of what the series is attempting to offer.  This is particularly true of the Blu-Ray release we received for review, which looks the part throughout.

As per its first series, this is one of the best subtitled anime releases we've ever seen here in the UK, with every sign and item of on-screen text lovingly translated, and with a fair number of translation notes appended to what's going on to boot - not enough for the series to actually make sense, but if you're still unsure what a "tsundere" is this show is happy to explain it to you amongst other things.  Meanwhile, the English dub of the series isn't bad for the most part, but it is undermined by a few performances from secondary characters that don't only sound phoned in but outright bored.

Having enjoyed the first outing of the Musashi Ariadust Academy - perhaps in spite of its high barriers to entry - I was really hoping that I could find a similar way of grounding myself in its second season to make the most of what it offers up.  Sadly, although there's still some fun to be found in its bawdy comedy and no-holds barred action, the impenetrable nature of its over-arching story really comes to the fore here.  It isn't enough to make the series unwatchable, but it is more than enough to make it hard to care about what's happening on-screen, and it's this above all else that proves to be the real thorn in the show's side.  If you really adored the show's characters and ideas in the first series of Horizon on the Middle of Nowhere then your enthusiasm might be able to carry you through these episodes, but otherwise this series simply asks too much of its viewers that they cannot possibly hope to reconcile.

5
Lots of things happen in this series - just don't expect most of them to make a whole lot of sense.
LATEST REVIEWS