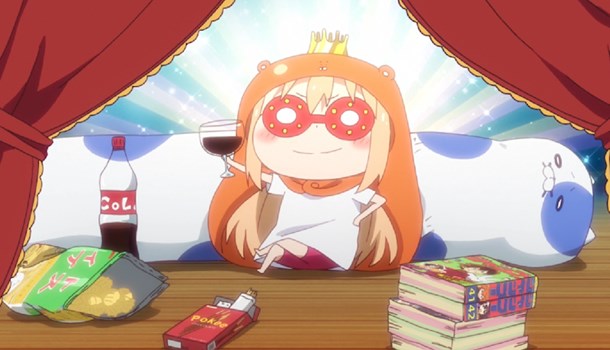 It might have taken a while to get here, but there was no way that Himouto! Umaru-chan wasn’t going to get a second season. But for us Brits arguably the timing of Himouto! Umaru-chan R couldn’t have been better – coming hot off the heels of Animatsu’s first season collection. So put on your baggiest animal hoodie (or closest approximation), grab a coke and get ready to do it all over again as anime’s currently reigning nerd queen is back for round two.

If you haven’t heard of Umaru-chan by now thankfully it won’t take long to bring you up to speed. In public Umaru Doma is the perfect highschool girl – she’s clever, attractive, athletic and everyone wants to be friends with her. But behind closed doors she’s a very different person – a lazy, layabout otaku who her co-habiting older brother Taihei constantly despairs at. This second season continues Umaru’s adventures as she grows closer to her friends Nana, Kirie and Sylphin and the lines between her personas begin to blur.

Given the vignette format of Umaru-chan it would be only natural to jump into this second season and expect that very little has changed. The first season proved to be extremely popular, so why fix what isn’t broken? However from these first four episodes alone it’s immediately clear that this season has set out to fix the one issue that would repeatedly let the first season down – character development. Five to ten minute shorts don’t really offer much time for detail when comedy is priority, which led to a lot of episodes where Umaru either didn’t properly face consequences or even learn anything at all from them. However it’s almost as if all that missed opportunity was collected together and injected into this season, because it’s a very different Umaru we’re dealing with here. There’s less of the super-deformed goblin child Umaru, and more of her out and about interacting with her now rather close-knit circle of friends. Even the sight of a normally drawn Umaru wearing the iconic hamster hoodie (a rare occurrence in the first season) feels more commonplace. We see Umaru care about her actions, and we see her properly caring about and valuing others as well. Only this time it isn’t in a “here’s a happy ending to the episode, next week the status quo will be reset” way, it’s a way that genuinely feels like Umaru is growing. It sounds like such a little change, but it’s significant enough to veer away any frustrations the viewer may have previously had with the show.

This development doesn’t just relate to Umaru herself though – even more significant is the added value the series places on its supporting cast. While viewers would have become familiar with Umaru’s friends in the previous series, arguably it was only Kirie that felt somewhat fleshed out from it. Nana was still just her timid, well-endowed friend and Sylphin her boisterous rival that unknowingly befriended her masked game tournament persona “UMR”. But to make up for that this season - so far - has pretty much belonged to both characters, with plenty of fuel being added to the Taihei/Nana shipping fire. While Sylphin comfortably establishes herself as the breakout star of the series. Her competitive streak has always been a good source of humour for the show, but the additional back story these episodes have provided (in addition to the proper introduction of her brother Alex) have made her so much more than just a comedy rival. The Christmas segment in episode four won’t just warm even the coldest hearts, it’ll show you just how valuable she’s become to the show.

Fans worried that this softer Umaru might mean that the show has lost its edge need not fret – the otaku culture parodies are just as prevalent as ever and the comedy hasn’t missed a beat. Highlights so far have included Umaru and friends having to choose between Detective Conan or Pretty Cure parodies on a cinema trip, Umaru and Taihei bonding over an addictive game that mirrors the likes of Pokemon or Yokai Watch’s takeover of Japan as well as Umaru falling victim to some rather effective advertising from the well-known fast food chain “NcDonald”. The jokes are just as good as ever, and with the supporting cast in a more significant role there’s room for wider dynamics and new scenarios to play with.

Himouto! Umaru-chan was a great show and deserved all the praise it got, however by opening up the floor to the extended cast Himouto! Umaru-chan R has turned it something into something really special. The relatable nerd-humour is still around and just as funny as ever, but with the added character development this season provides the show now has the heart it was noticeably lacking before. So sit back, enjoy the show and soon you too will come to realise that Sylphinford Tachibana is undeniably Umaru’s best girl.

You can watch Himouto! Umaru-chan R in streaming form via HIDIVE.

9
Umaru’s back and better than ever.