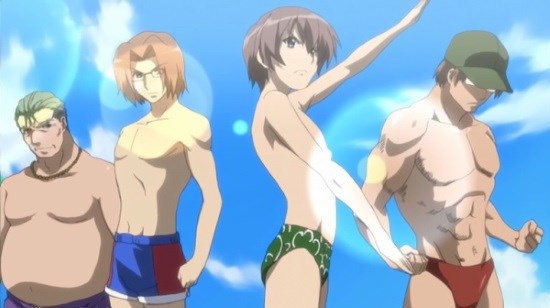 No. Nu-uh. I am not going back to that blasted village and those damned kids! What was that? I’m a professional and I have to? And there's a pool episode?….Oh alright then I’ll get my towel. Come on folks, once more we head into Himezawa for another 5 episodes in Higurashi When They Cry: Rei.

So, following on from the end of last season Rika has finally made her way to a timeline where she isn’t being brutally murdered every five minutes which is something of a good thing from her perspective. What better way to celebrate this newfound being alive-ness than to head down to the pool with the gang from some friendly fun involving a cursed pair of swimming trunks? Somewhat typically though this is more or less where the fun ends as in total defiance of all road safety laws Rika decides to ride her bike full at top speed down a steep hill and well….splat. Before you can say ‘here we go again’ Rika wakes up in yet another alternate timeline with one goal – get back to the world she just came from...and maybe learn to look before riding into traffic this time.

When a franchise opens it’s latest offering with a full-on fan-service episode it’s rarely a sign that the creative team have an amazing story to tell and sadly it’s no different here. It’s not really even as if the fan-service was all that good either as the series pretty simplistic animation and character designs don’t really lend themselves to that kind of material. Once you get into the main arc of this release things are little better. It’s difficult to have any kind of sympathy for Rika when, after all, the whole mess is her own fault and as she wanders round psyching herself up do something pretty nasty in an attempt to get back you’d be hard-pressed not to hold her as being the bad guy in all of this….

To be honest the whole of Rei feels like nothing more than a rather desperate scraping of the barrel in an attempt to keep the franchise going just a little longer despite it clearly having long-since run its course. Thanks to the brevity of the release there honestly isn’t anything else to say that hasn’t been said about the previous releases – certainly there’s no big shift on the technical side of things to warrant further discussion. If you’re an absolute die-hard fan of the franchise then this’ll no doubt give you another quick hit of everything you liked about the franchise. Otherwise….well...at least its short.

This release is also available as part of the complete collection available from MVM.