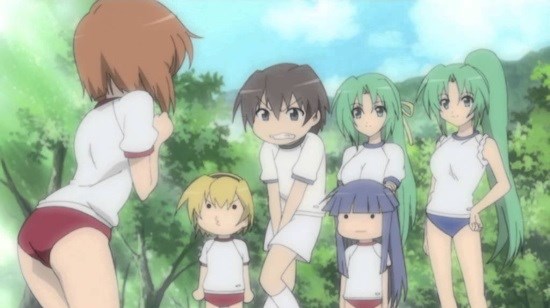 Commitment can be a funny old thing. Especially in storytelling where soften writers and directors just refuse to fully commit to what they’re doing and hold back from going the ‘full walrus’ as we say here at UKA. Chiaki Kon, the director of Higurashi and its sequel series, Higurashi: When They Cry Kai has not gone the full walrus in this sequel to her debut as a series director. She's gone and taken the whole bleeding zoo!

So if you haven’t seen season one then stop reading right here because it is, as you may have guessed, impossible to talk about season two without spoiling one of the big reveals from the final arc of season one. Everyone on board? OK then here we go.

As we learnt in season one, the seemingly endless ‘groundhog day’ repetitions of the events occurring in the village of Hinamizawa are in fact all Rika’s fault as she either jumps back through time or to an alternate dimension (depending on how you interpret things), as she seeks to find one in which she is not brutally murdered by the end of the sequence. By the time Kai rolls around she’s been going through this hundreds of times and has still yet to make much headway (yes this is all a bit Homura isn’t it? Well, I did say last time around that many modern anime owed a debt to this series…). Subtle things are changing though – Keiichi seems to have started to remember some of the alternate timelines as well, and the secrets of this mysterious little village have started to come seeping out into the light.

There was only ever going to be two ways you could go with a sequel to Higurashi – full reboot or double down on what you already had and they’ve done the latter, much harder option here. Whilst one of the big issues with season one was the constant repetition of the same pieces of information, here that story telling method has been excised almost entirely as the creative team start to push through surprise revelations at every opportunity. You can almost smell whatever it was that was being smoked in the writer’s room when they started to work on season two - “...and then after her ghost/alien friend talks to her the villages secret ninja assassins show up….”. Does this make the series more entertaining? Well, yes for the most part but at the same time the series is still very much bogged down with the more personal aspects of its characters which never quite hold the emotional weight that they need to thanks to the foreknowledge that sooner or later the whole thing is just going to reset back to the beginning again.

It makes the series pretty difficult to assess as there's nothing new here apart from the episodes – the character designs, quality of animation and so on are no different to what they were before although there's no dub for this second season, which is a bit of a disappointment.

When you look at the show purely on these merits, the cracks in the story become more apparent and (helpfully to a reviewer sigh) become more difficult to talk about without presenting massive spoilers. Ultimately your opinion of season two comes down to how much you enjoyed season one. If you thought it was great and feel like seeing more of the same but with a whole bunch of bonkers twists thrown in for good measure then you’ll be on board for this but otherwise Higurashi : When They Cry Kai isn’t really a good jumping on point for the series and whilst it is better than the first season it’s not so much so that it’s going to convert you if you weren’t a fan already.

Higurashi : When They Cry Kai is also available as part of the complete boxset coming from MVM