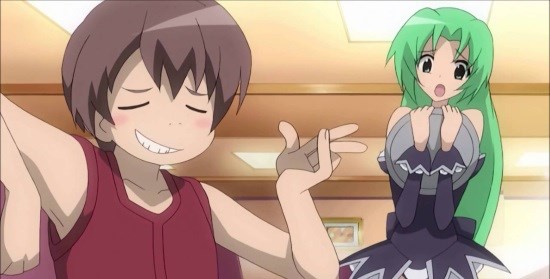 There are, believe it or not, still a few near-mythical anime titles that have yet to make it to these shores. But whilst we continue our manifesto for the liberation of Shirobako and a certain Anime Limited director probably still gets a nervous tic whenever someone mentions Scrapped Princess, we can at long last cross Higurashi: When They Cry off of the list. 12 years on from its debut in Japan this light novel adaptation has finally hit the UK thanks to MVM. But is it worth the wait?

The village of Hinamizawa is quiet, small and remote deep in the Japanese countryside and it’s into this seemingly innocuous location that Keiichi Maebara finds himself following a move from his parents. He’s not one to sulk though and he’s trying to make the best of things especially at a school which is so small that all age-groups are taught together, meaning his friends in the school games club include a pair of young children alongside members his own age. Things however are not all fun and games in this quiet mountain town. Murder most foul is about to enter Keiichi’s life and no matter what he tries he’s going to find himself embroiled in a lurking horror which seems to drag in everyone it touches. Hinamizawa is truly a place of horrors and death lurks around every corner coming from even the most unlikely hands.

The thing to know before going into Higurashi is that this is not one big 26 episode series as you might expect. Rather, this is effectively a bunch of six or so OVAs, for want of a better word. Each tells an almost totally separate story involving the same core group of characters but then resets everything and starts all over again for the next arc. Unfortunately this does cause some narrative headaches, especially if you were watching the series over a relatively short space of time (like say for a review…) because of the fact that huge hunks of exposition get regurgitated over and over at the start of each plot line. Whilst there are some differences there's more than a whiff of the Endless Eight about the proceedings here and it makes the opening episodes of each arc tiresome especially given that there are always just enough snippets of new information and action that mean you can’t skip them.

This somewhat compounds the series' other problem. Well, perhaps "problem" is too strong a term as it’s certainly not the fault of the series as much as the amount of time it took to get the series over here. This is after all a series from over a decade ago and it has not aged all that well. The visuals are very much of the time and hover awkwardly in that middle ground between being actually bad and being well-loved enough for the issues to be overlooked (there will certainly be more than a few fans of the show over here for whom that won’t be a problem though). The show also relies to a large extent on shock value in terms of how its cutesy bunch of characters act throughout the proceedings but the combination of the production not being willing to push the on-screen violence too much, preferring to mostly leave things just off camera, and the fact that modern audiences have seen the likes of Madoka, Magical Girl Raising Project and High school of the Dead means that everyone has seen this concept done a lot, though admittedly there is likely a debt owed to series like Higurashi for clearing the way.

What you’re left with then is a series that you rather guiltily have to conclude doesn’t really hold up all that well any more. Whilst there are still a few highlights (some of the slice-of-life gags are still funny, and there's a moment involving fingernails that’s not for the squeamish), the series as a whole is best viewed as a historical predecessor to more modern fare that have built upon the groundwork it laid. If this is an old classic you remember fondly then stick on your rose-tinted specs and watch away, otherwise your mileage may vary.

Higurashi When They Cry will be available separately and as part of a collector's edition including the whole franchise.

5
Some classics are best when remembered.