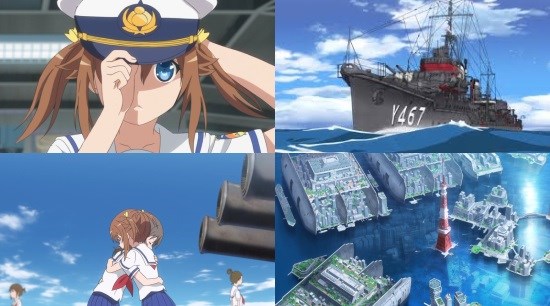 Ah, the sound of the waves, metal behemoths cruising along the sea under the sun, the smell of gunpowder in the air... it must be another girls-with-military-hardware show (though at this point you could also call it the Takaaki Suzuki genre). Of all the genres in anime at the moment this has got to be one of the most consistently good (though admittedly there aren’t many of them – airsoft shows don’t count)with Girls und Panzer and Strike Witches flying the flag, and even Kancolle was great fun to watch. Now we’re returning to the sea once more, with girls und Schlachtschiffe... erm, that is High School Fleet aka Haifuri.

In a world where Japan has moved much of its population onto reclaimed land and ships due to rising sea levels, the nation's naval forces have become even more important and naturally schools have sprung up to train young teenagers so that they can man the main guns as early as possible. Our heroine Akeno Misaki has long wished to join the illustrious all-female Blue Mermaids, who sail in defense of the nation. In order to join she enrols in Yokosuka Girl’s Marine High school along with her childhood friend Moeka. Despite a terrible exam score Akeno manages to be selected as the captain of the destroyer Harekaze and sets sail with her new, and pretty eccentric, crew. Unfortunately things start to go wrong almost immediately as engine and navigation issues cause the Harekaze to be late to their rendezvous with the rest of the training fleet, and to their shock the lead instructor orders her vessel to open fire on the girls! Forced to defend themselves and flee the scene Akane and her crew are branded mutineers and must try and figure out what exactly has happened. Still wanted by the government, they survive as soldiers of fortune. If you have a problem, if no one else can help, and if you can find them, maybe you can hire the.... well, not quite...

Joking aside there really were a few moments when a nautical girls A-Team seemed like it could be a thing here, but the show’s creators seem to actively try and diffuse any tension pretty quickly and it’s clear that despite the pretty serious subject matter the staff are much more interested in making sure that the crew have wacky antics galore to fill in the spaces where they can’t be having naval battles. This is not necessarily a bad thing, as every other show in this genre has tried to pull off the same trick with pretty solid success but it has to be said that they don’t quite pull it off as well as they could have done here, which is probably down to the cast members straying a little too far into kooky territory, in turn defusing most of the tension very quickly. This is especially true of Kouko whose sudden outbursts of saying what she feels everyone is thinking in little plays gets old pretty quickly.

There is some genuine fun here too though, as the engineering crew in particular are great fun to see whenever they pop onto screen acting for all the world like a group of female Scotties. The actual battle sequences are really nicely done toom as the crew (somewhat unbelievably) spring into action in a series of nicely worked out tactical manoeuvres that see them managing to just about get away from other ships without having to do too much damage to them. The animation of these sequences is really pretty good – the anime industry does love their detailed depictions of military hardware after all and all the ships here have every detail painstakingly added into each shot and look great! Its director Yuu Nobuta’s first time in the big chair but he’s certainly doing a good job here in making sure that if nothing else the series looks fantastic.

All in all the show does a really good job of setting out its stall across these first five episodes. Whilst it looks pretty certain that you’ll never get as attached to the characters as you did in, say, Girls und Panzer due to the misjudged character work the battle sequences will be there to catch you and hook you in and keep you watching to discover just exactly what is going on (although we certainly hope that the revelations in episode five aren’t all there is to it...) If nothing else this should nicely fill in some time whilst you join us in the foot-tapping, company-prodding game of "why has no-one licensed the Strike Witches or Girls und Panzer movie and OVA’s yet?"

You can currently watch Flying Witch in streaming form on Crunchyroll and FunimationNow.

7
Girls plus military vehicles - a winning formula every time