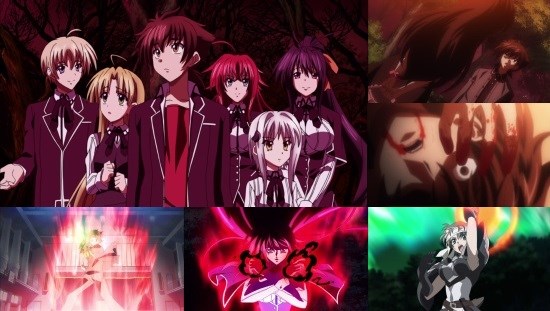 When asked for the first thing that pops into your head when you think of High School DxD, the majority of people who are somewhat familiar with the series will mention that the ending animation features the female cast members of the show pole dancing. While a very odd facet of the series to focus on, it is also a rather apt statement to make about what kind of show High School DxD is. That is, it's a show that is rather bold in the fact that it mixes in a lot of fan service and nudity into its main story and plot. While other shows of this nature would mainly use it's fan service as cut-away comedy moments, High School DxD makes it very central to the plot by having it be the protagonist's source of motivation.

The protagonist in question is Issei Hyoudo, who makes up a third of his high school's most reviled social group. Along with his friends, they spend their time engaging in rather perverted activities such as spying on girls as they change clothes and openly talking about their sexual aspirations, much to the disgust of the female student body. While being a pervert, Issei still seems like the most well-adjusted out of the three, and things start to improve for Issei when he suddenly gets a girlfriend. However, this leads to tragedy as Issei is murdered by this new girlfriend, who is actually a fallen angel in disguise. Things turn bizarre when Issei awakens the next morning to find himself fully healed, all traces of his girlfriend gone (including his friend's memories of her) and him now existing as a devil in the service of Rias Gremory. Rias is the president of the school's occult research club, but this club is actually a front for Rias and her servants base of operations.

Now as a devil, Issei works to fulfil the duties he has been given with the goal of becoming a recognised devil with enough influence to start his own harem - duties which involve Issei carrying out various odd-jobs and requests that humans make. The requests themselves are not really noteworthy but the people who make the requests are incredibly bizarre, ranging from incredibly shy girls dressed in armour to cosplaying fans who take their obsessions a bit too far. The requests themselves act as side stories and to setup the main plot of the series.

The plot in question revolves around a war between three factions - Angels, Devils and Fallen Angels. For the most part the series focuses on Fallen Angels and Devils, the former of which - while being cast out of heaven - still take up residence in churches and use believers of God to do their bidding. The series presents fallen angels and exorcists that associate themselves with this faction as being the main antagonists, while Devils that are mainly shown as a source of evil are shown to be the series protagonists since this is the group that Issei and his friends belong to. The Devils of High School DxD work towards raising their population by recruiting humans to their cause by reincarnating them as devils, with the show's setup also explaining how devils fight and make use of their servants.

In High School DxD, a noble devil can have up to fifteen servants, and the system of recruitment is tied closely with the game of chess. Each servant is given an “evil piece” which will determine what characteristics they will have in battle. The master is the King while their servants fulfil the roles of Knight, Bishop, Rook, Queen and Pawn. Issei is given the pawn piece which, like chess, allows him to promote to another piece once he has entered enemy territory. The series actually makes good use of this concept by not only having this be the basis for each of the character's attacks, but also by having the cast participate in a battle that directly ties into this concept. Rules for the evil pieces are established early on to show how each character fights, but also to explain the rules of combat for the series. Alongside this, characters have at their disposal increased strength and dexterity due to not being human, with access to magic and (for some characters) a special weapon.

These weapons are known as Sacred Gears, and the one Issei has is known as the Boosted Gear - this gives Issei the power of a dragon and allows him to boost his attack power several times over. There are various scenes of Issei being trained in order to become stronger and master this power; while this is played seriously with Issei's attempts to become stronger and a better devil, there are some rather comedic moments that go along with this which mainly revolve around what Issei wants his attacks to be like and the desired effect from them. As you've probably guessed, most of Issei's attacks revolve around perversion - since he likes to mentally undress every woman he sees he tries to incorporate this into his fighting style, much to the disgust of all and sundry including his fellow devils. Along with such attacks there are some rather decent action scenes involving hand-to-hand combat, sword fighting and magic, although what makes the action fun to watch is the setup behind it since there is quite a bit of strategy involved thanks to the whole chess motif and taking advantage of enemy positions.

While High School DxD does create an interesting world filled with warring factions and a rather clever set up for battles, there are a few things that could put people off. It should be noted that the fan service and "ecchi" aspects of the show are incredibly prevalent. The series is filled with the usual fan service tropes one would expect - panty shots, jiggling breasts and convenient angles to take advantage of them. However, things go further here - there's plenty of nudity and sexual content. The English dub plays this up a bit further with the use of really vulgar slang, bad language and Americanisms. It almost seems like they're pulling words and terms from a thesaurus at times in order not to repeat the same term for breasts and sexual activities more than once. While this can get really awkward at times with some of the language used, in an odd way it fits the tone of the series and nature of the offending characters. Since the series unashamedly flaunts its fan service, it seems like FUNimation stepped up to the challenge to provide a dub that matched it, and for the most part it's surprisingly funny. It should also be noted that the subtitle track provides a more direct translation of the Japanese audio for those worried that the dub track's script had spilled over. Another way that High School DxD flaunts it's fan service is in its extra materials, which contain three minute shorts which can be described as pure fetish fuel as the episodes involve a mini beach episode, several of the girls showering together and even tentacle rape (but with magic ramen for some reason). Also included are character bios, but related by Issei and his initial group of perverts. Both of these extras have no dub track and are only available in Japanese with English subtitles.

High School DxD provides a rather interesting depiction of the battle between Heaven and Hell - it's a pleasant surprise for those who can look past or embrace the fan service, as the series actually has a rather interesting plot with some fun characters. However, those who can't stand such elements will likely find themselves too overwhelmed by the sheer volume and scale of said fan service to appreciate the other aspects of the series.