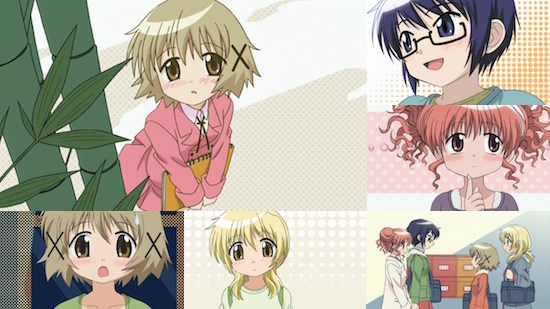 If you have ever hung around UK Anime towers for any length of time you will have likely heard our editor in chief waxing lyrical about Hidamari Sketch in one of his now famous Hidamari orations, such as his recent YouTube video "Through the mailbox: Hidamari Sketch Complete Series 1 Collection". If you listen very carefully you may pick up one or two very subtle hints that he really, really, really, loves Hidamari Sketch and is more than a little biased towards the series. So it is that I find myself tasked with reviewing the series, our editor’s favourite series.

Hidamari Sketch is, of course, perfect in every single way. Buy it immediately. 10/10. The End.

Has he gone yet? Good. Now, onto the real review:

Hidamari Sketch follows the comings and goings of four Yamabuki Art High School students and residents of the Hidamari Apartments: Yuno, Miyako, Sae and Hiro. The apartments are ideally located for the girls, being situated opposite their school. This is especially true as they all live alone. Yuno is a sweet girl, sometimes lacking in confidence and almost childlike in appearance - something Miyako, the spontaneous, easy-going, fun-loving eating machine of the group often comments on. Next up we have Sae, the groups’ "straight man" and a romantic fiction writer who is surprisingly easily embarrassed given her chosen trade. Finally there is Hiro, by far the most organised of the four who seems to spend much of her time acting as the other girls' surrogate mother and babysitting Sae.

The series also boasts a host of secondary characters, including a doddering old principal capable of occasional but amazing athletic feats; a cosplaying, vain and almost childish teacher; and the Hidamari Apartments’ landlady among a host of others. Though the series is really all about the girls in the Hidamari Apartments. Yuno could be considered the main character of this story, as most of the series’ events follow her in one way or another and she often muses on the day's events in the bath at the end of an episode.

Hidamari Sketch is often described as a slice of life show, and that’s perhaps not quite the right way to describe it. Hidamari Sketch is the ultimate distillation of the slice of life genre. That is both the series’ greatest strength and its greatest weakness. You see, very little actually happens in this series - there is no big drama or overarching plot or even goals that the girls are striving for beyond the normal banalities of life for Japanese high school art students. I have never made so few notes while watching a series, simply because there is so very little that actually happens in each episode. By all rights watching such a barrage of nothing should be boring, and yes sometimes it is boring, yet somehow even then the series manages to be strangely compelling. This is probably due mainly to the series’ endearing characters and quirky animation. There is also the series jumbled up chronology which keeps you somewhat on your toes, as you are never quite sure where in the girls’ timeline the next episode will place you.

Hidamari Sketch makes the mundane a lot more compelling than it has any right to be. The animation is quirky but excellent and looks good even on the DVD review copies we received, though I would love to see the series in HD (although we should note this first season's Blu-ray release is an upscale). The characters are surprisingly endearing given what little information the series drip feeds the viewer about them. This is a series for those who want something a little more sedate than the norm; adventure seekers certainly need not apply. If you can manage to sit through the low points then you will find that on the whole Hidamari Sketch is a surprisingly fun and quirky series that is well worth checking out.

Unfortunately, as a small note of caution there is some bad news about this release, and one presumes the Sentai Filmworks release on which this is based. The review DVDs we received are plagued by poor subtitles. Spelling mistakes and mistranslations are common and quickly begin to detract from your engagement with the series. Howlers such as: “let’s do out best tomorrow” or using “fell” instead of “felt”, which occur within moments of each other, give the impression the subtitles were run through a naive spellchecker and never checked for accuracy. These problems aren't a deal breaker, but they can get pretty tiresome after a while.

7
Strangely compelling viewing. Quirky animation and endearing characters make this series far more entertaining that it has any right to be.
LATEST REVIEWS