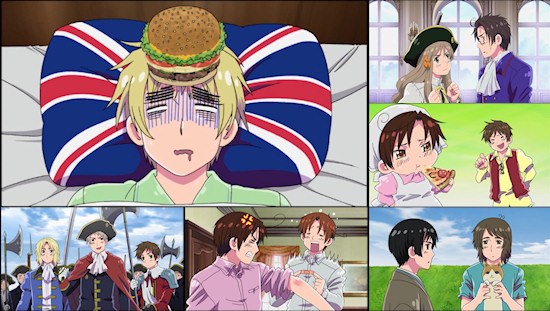 It might have a new subtitle of World Series, but make no mistake about it - little has changed as Hetalia reaches its third season, for better or worse.

Technically speaking, this third season collection from Manga Entertainment simply takes in the first half of the forty-eight episodes which make up World Series, meaning that this single DVD crams in twenty-four short episodes of light-hearted shenanigans as we once again view the world through the imaginings of the countries which comprise it anthropomorphised as (mostly) good-looking young men.

Perhaps most notable in terms of shaking up the show's premise is the introduction of a few new characters - Greece in particular makes frequent appearances across these episodes, with the series continuing with its usual, light to the point of being harmless stereotypical characterisation in the name of comedy, even if its Japanese script does pre-date Greece's financial crisis to the point where it almost feels a little bit too toothless.

The same cannot be said of FUNimation Entertainment's English dub for the series, which (as per previous series of Hetalia) takes the unusual step of departing quite markedly from the original source dialogue quite regularly.  While the Japanese script is pretty soft and inoffensive when it comes to picking its targets, the English dub swears up a storm and provides a hard and occasionally nasty edge to proceedings which actually feels entirely out of place on occasion.  One perfect example of this is a sketch where Greece is wishing that he were a cat - while the Japanese language track sees him lazily  dreaming of watching the clouds pass by in the sky every day, the English dub has him wanting to be able to.... err... lick his own genitals constantly.  Admittedly, the Japanese script is dull and unfunny in this example, but I'm not entirely sure that going off at the deep end in the opposite direction is much better.  By the time you reach the use of phrases like "douche nozzle" and the more knowing and overt references to homosexuality used by the English dub, watching said dub really is like watching another show entirely.

Perhaps the most interesting aspect of World Series is, just like its predecessors, when the show turns to actual historical events as the basis for what's going on on-screen - this is at least mildly educational and occasionally somewhat insightful, so if history is something you have an interest in at all there's some value to be drawn from World Series here.  Even in these segments however, the English language dub seems determined to hijack things - although its references to how boring all of this is and how Americans won't understand it anyway is all delivered with a knowing wink and ironic smile, it still tends to detract from what's being discussed rather than adding to it.

Regardless of your choice of language options, there's one problem that we can't really escape from in World Series - to quote The Smiths, "that joke isn't funny any more".  This isn't because it's too close to home or too near the bone, but simply that the central gags of the series are too well-worn now to get a laugh after three seasons and a movie.  Aside from the occasional (very occasional) joke which manages to break the mould and raise a chuckle, much of the series at this point is simply leaning on character tropes and stereotypes that can only be funny so many times before becoming repetitive.  New characters add a little respite to this "seen it all before feeling", but sadly even these new-comers are sufficiently forgettable to prove unable to carry the weigh of comedy expectation upon its shoulders.

Where Hetalia's UK release has always impressed us is in the sheer number and scope of its extras, and World Series is no different in these terms, boasting a wonderful plethora of goodies from episode commentaries through to coverage of a number of fan events and the like in Japan.  If only all anime DVDs had this much bonus material to bring to the table.  In more general terms, the video quality of the show's transfer is "good enough" - Hetalia has never been the best-looking or visually extravagant of series given its origins, and thus its DVD release looks as good as you could reasonably expect it to.

If you're a long-term fan of Hetalia with a particular love of some if not most of its characters, then another opportunity to spend some time with them will no doubt be to your liking - certainly, nothing has changed to upset existing fans of the franchise.  Beyond that however, World Series feels like an increasingly weak and limited comedy series that has outstayed its welcome - a problem that even it's edgier and more direct English dub can do nothing to change.

English 5.1 and Japanese 2.0 audio with English subtitles.  As per previous Hetalia releases, there are a huge number of extras on show here: Commentaries on episodes 1, 4 and 6 from members of the English dub cast; The Hidden History Within Hetalia feature; Hetalia fan event coverage from Tokyo International Anime Fair 2010; additional fan event footage; event coverage from Tokushima; outtakes; English trailer; text-free opening and endings.

4
It's more of the same for Hetalia fans, but dig beneath its shallow surface and World Series is clearly a comedy that has almost entirely run out of ideas.
LATEST REVIEWS