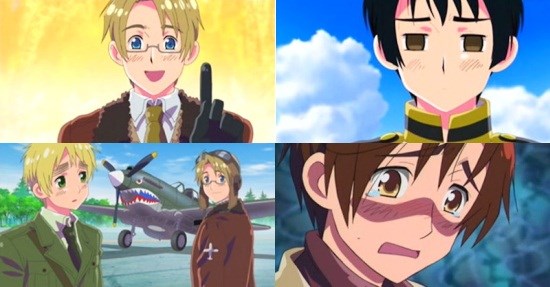 If any country can be expected to dwell perhaps excessively on World War II, it's Britain - From Doctor Who to football chants, you simply can't escape that particular and pivotal time in our history, and that doesn't ever seem likely to change short of (God forbid) another similarly far-reaching conflict in Europe.  However, we don't appear to be the only ones with an eye for World War II era Europe; at least, judging by Hetalia: Axis Powers we aren't.

In typical Japanese anime fashion, Hetalia takes the world as it is during the Second World War and beyond, anthropomorphosises a wide variety of countries as living, breathing (and predominantly male) characters, and then allows them to run free in the name of comedy.  While this concept has already generated controversy in its homeland (albeit needlessly so, with South Korea complaining about racist interpretations of their nation despite not even appearing in the show, yet still managing to see it relegated from a TV broadcast to only being made available online via mobile devices) it has nonetheless developed quite a following outside of Japan amongst female anime fans in particular, to the point where it has now been licensed for a North American DVD release by FUNimation, with the series also getting a streaming treatment for UK viewers via their YouTube channel.

In terms of accessibility, Hetalia is certainly easy to delve into, with each episode having a running time of just five minutes, making it a perfect series to dip in and out of on a whim.  Despite its ever-growing roster of characters, the series also succeeds in making each country instantly and easily recognisable - A fact which serves as both a charm point and the biggest criticism which can be levelled at the series.

While every country and thus character is easy to pick out and get a handle on, the reason for this is often based upon blatant stereotypes of the country in question.  While these can often make for amusing jokes when a character is first introduced ("Oh, look, Germany is serious all the time!"; "What fun, Italy talks about pasta a lot"; "Ho ho, look at France preening and showing off his pretty long hair!"), they often get run into the ground by their frequent overuse, particular in the case of the more regularly appearing countries who soon threaten to run short of steam when it comes to making new jokes or just keeping the series moving at all.

That said, occasionally Hetalia does manage to nail some of its gags dead-on even when it is pandering to these stereotypes - This reviewer was in tears of laughter when Japan gets hold of Germany's U-boat plans and creates an improved version which is available to buy in multiple colours... oh, and it can turn into a giant robot, naturally.  Hetalia is sprinkled with moments of magic like this which almost make the whole endeavour worthwhile thanks to the short running time of each instalment, but whether there are enough of those memorable jokes to make the episodes which languish in mediocrity at best bearable depends on your perspective.

One thing is for certain however - If you're a professor of history or take the concept of political correctness too seriously, whatever you do don't watch Hetalia, as you're almost guaranteed to hate it.  If you can live with the use (and overuse) of national stereotypes and have the patience to see them occasionally flogged like a dead horse while you wait for the genuinely funny moments to shine through, then there is some top-notch comedy to be found here.  If only Hetalia was a little more streamlined and disciplined to make those comic moments more frequent, the series thus far could have been a real classic.

Hetalia: Axis Powers can currently be viewed in streaming form on the FUNimation YouTube channel.

6
Some genuinely funny moments all too regularly get lost in the stream of repetition and lazy stereotyping employed by the series.
LATEST REVIEWS